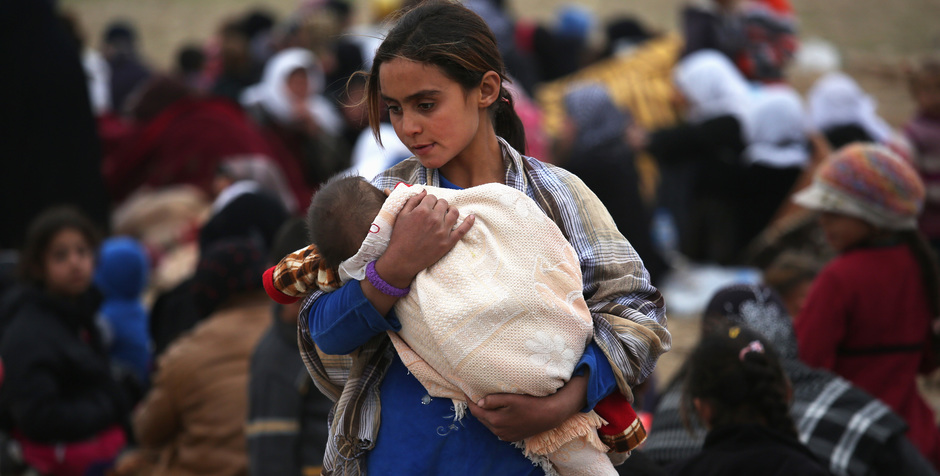 Buried in the controversy over President Trump’s reissued Executive Order pausing the refugee program to ensure extreme vetting and the admission of foreign nationals from six terrorist hotspots, President Trump is simultaneously making the case for the establishment of in-region safe zones.

This is a critical policy proposal that we at the ACLJ have been urging, in conjunction with a pause in Syrian refugees and the implementation of verifiable vetting procedures, for the last year and a half. We have long argued that the most compassionate way to care for the millions of displaced victims of ISIS genocide is through the establishment of in-region safe zones.

Shortly after taking office, President Trump said he “will absolutely do safe zones in Syria” for victims fleeing genocide, and now he is beginning to lay the groundwork.

First, last week in his first Joint Address to Congress, President Trump stated, “The only long-term solution for these humanitarian disasters is to create the conditions where displaced persons can safely return home and begin the long process of rebuilding.” This is a direct reference to the establishment of in-region safe zones.

Second, (and this passed by with little to no notice in the mainstream media) in addition to President Trump’s Executive Order to Protect America from Foreign Terrorists, the President also issued an implementing Presidential memorandum instructing the Secretary of State, Attorney General, and Secretary of the Department of Homeland Security to take a number of steps to implement the Executive Order.  That Presidential Memorandum directs:

The Secretary of State, in consultation with the Director of the Office of Management and Budget, shall, within 180 days of the date of this memorandum, produce a report estimating how many refugees are being supported in countries of first asylum (near their home countries) for the same long-term cost as supporting refugees in the United States, taking into account the full lifetime cost of Federal, State, and local benefits, and the comparable cost of providing similar benefits elsewhere.

As I explained earlier this year in my post, “Shibboleth: Why Extreme Vetting and In-Region Safe Zones Can be the Christian Response to Refugees”:

In-region safe zones is actually the most compassionate way to care for the most people, the quickest, when dealing with a refugee crisis such as is seen in the Middle East today.

There is no way to import millions upon millions of Christians and other religious minorities fleeing ISIS genocide. Our refugee program could not even come close to helping the number of people who need assistance.

However, America’s leadership, funding, and protection could allow for the establishment of safe zones for Christians and other religious minority victims of genocide right there in their own homeland.  The refugees themselves do not want to be uprooted from their way of life and thrust into a different culture.  It is more humane, more compassionate, and more workable to take care of them, protect them, and shelter them right there in their own homeland, allowing them to quickly and easily return to their own homes and way of life as soon as the crisis has been ended and ISIS has been soundly defeated.  In fact, it could help far more people far more quickly . . . .

In-region safe zones, in conjunction with extreme vetting, is not only a workable solution, it can be a Christian solution.  As I previously explained from the example of “Shibboleth” in the Bible:

That is what is being advocated here. Take steps to ensure that those who are claiming to be refugees are in fact fleeing ISIS and not ISIS trying to infiltrate America.  Thus pause the refugee program until we can actually vet those coming into our country and then renew the refugee program, protecting the innocent and keeping out the evil.

It is encouraging that the groundwork is now being laid for the second part of this equation, safe zones. With the new Executive Order – something we aggressively advocated for and support – we believe the right steps are being taken toward protecting America and taking affirmative steps toward ending the genocide and protecting Christians.  Much work is still to be done, but this is a tremendous start.

We stand ready to defend the new Executive Order to keep America safe in court. We believe it is legally bulletproof, and we’re preparing legal briefs as new lawsuits are being filed.

Learn more about these issues:

And take action with us by signing our petition below.