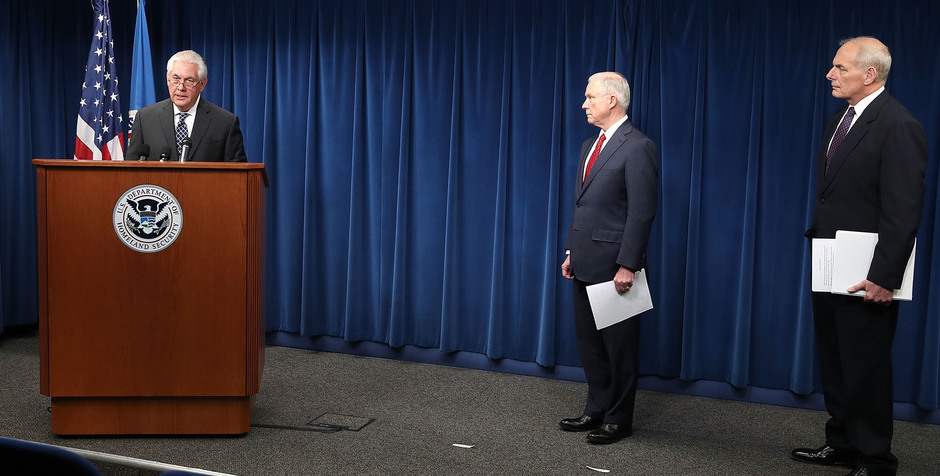 This new order is legally bullet proof. It serves as a key first step in protecting America from jihadist attacks.  It recognizes the fact that of the 1,000 ongoing terrorist investigations in the U.S., 300 are looking into individuals who entered America through our refugee program.  And it implements many of our legal proposals aimed at withstanding judicial review.

Here’s what the new Executive order actually does:

There are several key changes made in this new order. Because the Iraqi government has diligently worked with the U.S. government over the last month to coordinate information sharing to ensure security and certainty, Iraq is no longer on the list of countries affected by the temporary travel restrictions. Furthermore, the temporary travel restrictions do not apply to lawful permanent residents (what are commonly referred to as green card holders), those with valid visas as of January 27, 2017, and those refugees whose travel has already been scheduled to the United States by the State Department as of March 16, 2017 – the effective date of the new order.

The provision of an effective date for the order is something we strongly encouraged the Trump Administration to add as it provides vital notice, a key component of procedural due process requirements that were cited by federal courts when they enjoined the original order.

We also urged the Administration to provide a thorough and detailed listing of the justifications for this order. A key component of this is their exhaustive detailing of why these six countries do not have a stable and secure government apparatus that currently allows us to verify information vital to our national security.  The order does exactly that:

(e)  The following are brief descriptions, taken in part from the Department of State's Country Reports on Terrorism 2015 (June 2016), of some of the conditions in six of the previously designated countries that demonstrate why their nationals continue to present heightened risks to the security of the United States:

(i)    Iran.  Iran has been designated as a state sponsor of terrorism since 1984 and continues to support various terrorist groups, including Hizballah, Hamas, and terrorist groups in Iraq.  Iran has also been linked to support for al-Qa'ida and has permitted al-Qa'ida to transport funds and fighters through Iran to Syria and South Asia.  Iran does not cooperate with the United States in counterterrorism efforts.

(ii)   Libya.  Libya is an active combat zone, with hostilities between the internationally recognized government and its rivals.  In many parts of the country, security and law enforcement functions are provided by armed militias rather than state institutions.  Violent extremist groups, including the Islamic State of Iraq and Syria (ISIS), have exploited these conditions to expand their presence in the country.  The Libyan government provides some cooperation with the United States' counterterrorism efforts, but it is unable to secure thousands of miles of its land and maritime borders, enabling the illicit flow of weapons, migrants, and foreign terrorist fighters.  The United States Embassy in Libya suspended its operations in 2014.

(iii)  Somalia.  Portions of Somalia have been terrorist safe havens.  Al-Shabaab, an al-Qa'ida-affiliated terrorist group, has operated in the country for years and continues to plan and mount operations within Somalia and in neighboring countries.  Somalia has porous borders, and most countries do not recognize Somali identity documents.  The Somali government cooperates with the United States in some counterterrorism operations but does not have the capacity to sustain military pressure on or to investigate suspected terrorists.

(iv)   Sudan.  Sudan has been designated as a state sponsor of terrorism since 1993 because of its support for international terrorist groups, including Hizballah and Hamas.  Historically, Sudan provided safe havens for al-Qa'ida and other terrorist groups to meet and train.  Although Sudan's support to al-Qa'ida has ceased and it provides some cooperation with the United States' counterterrorism efforts, elements of core al-Qa'ida and ISIS-linked terrorist groups remain active in the country.

(v)    Syria.  Syria has been designated as a state sponsor of terrorism since 1979.  The Syrian government is engaged in an ongoing military conflict against ISIS and others for control of portions of the country.  At the same time, Syria continues to support other terrorist groups.  It has allowed or encouraged extremists to pass through its territory to enter Iraq.  ISIS continues to attract foreign fighters to Syria and to use its base in Syria to plot or encourage attacks around the globe, including in the United States.  The United States Embassy in Syria suspended its operations in 2012.  Syria does not cooperate with the United States' counterterrorism efforts.

(vi)   Yemen.  Yemen is the site of an ongoing conflict between the incumbent government and the Houthi-led opposition.  Both ISIS and a second group, al-Qa'ida in the Arabian Peninsula (AQAP), have exploited this conflict to expand their presence in Yemen and to carry out hundreds of attacks.  Weapons and other materials smuggled across Yemen's porous borders are used to finance AQAP and other terrorist activities.  In 2015, the United States Embassy in Yemen suspended its operations, and embassy staff were relocated out of the country.  Yemen has been supportive of, but has not been able to cooperate fully with, the United States in counterterrorism efforts.

The new Executive order also provides a detailed procedure to gain an exception to the order for those who truly deserve it and face “undue hardship.” Whether it’s an individual working or studying in the United States who has previously worked or studied here, has professional or business obligations here, has previously sacrificed to serve the United States, is a young child or adoptee, or for family reunification purposes, the order provides numerous examples of case-by-case exceptions and waivers that would likely be granted.

The order also allows the Secretary of State and the Secretary of Homeland Security to admit refugees on a case-by-case basis during the 120-day pause, “only so long as they determine that the entry of such individuals as refugees is in the national interest and does not pose a threat to the security or welfare of the United States, including in circumstances such as the following:  the individual's entry would enable the United States to conform its conduct to a preexisting international agreement or arrangement, or the denial of entry would cause undue hardship.”

These significant changes not only ensure that America will be kept safe, but they also undercut the various legal challenges to the lawful order.

However, the ACLU and its leftist allies have already promised to file new, frivolous lawsuits. In fact the ACLU has already released a statement calling attempts to project America from jihadist terrorist attacks “bogus.”

Regardless of whether the ACLU and the Left want to admit it, the threat is real. Just read this one line from President Trump’s new Executive order: “The Attorney General has reported to me that more than 300 persons who entered the United States as refugees are currently the subjects of counterterrorism investigations by the Federal Bureau of Investigation.” It’s chilling.

We must defend America. At the ACLJ, we’re ready to file amicus briefs in the impending legal challenges to this new lawful, commonsense Executive order. Join with us by adding your name to our petition below.