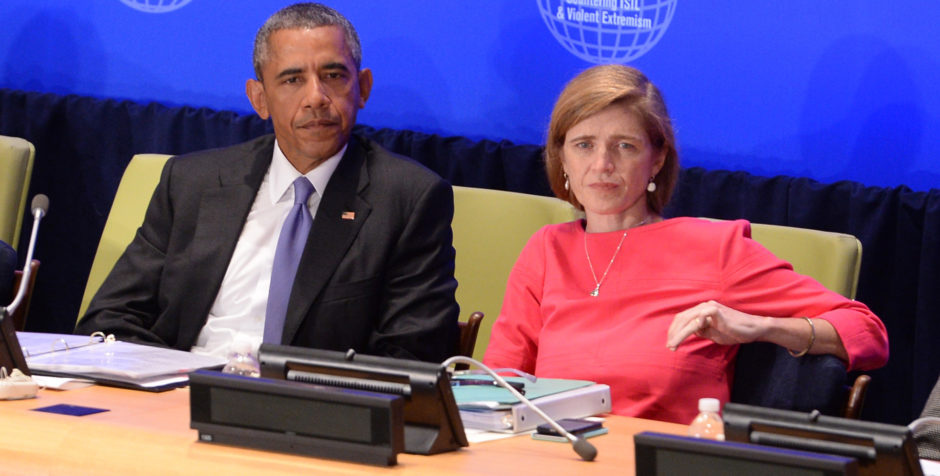 We’ve reported for months on the frightening Obama Administration “unmasking” scandal and other Obama deep state efforts to sabotage the new Administration and undermine the Constitution – and what we are doing about it.

The momentum is starting to shift.

Recent reports show that President Obama’s National Security Advisor Susan Rice is being implicated in the unmasking scandal and leaking disgrace which is being exposed for what it is.  We sent a Freedom of Information Act (FOIA) request to the National Security Agency (NSA). They ignored it, so we took them to federal court – our second federal lawsuit against the NSA in the past few months.

Reports just this month reveal that Samantha Power – President Obama’s Representative to the United Nations – is believed to have requested hundreds of so-called “unmaskings” of United States persons.

You read that right, President Obama’s U.N. Representative is believed to have made hundreds of unmasking requests.

According to the Washington Free Beacon:

Former United Nations Ambassador Samantha Power is believed to have made ‘hundreds’ of unmasking requests to identify individuals named in classified intelligence community reports related to Trump and his presidential transition team, according to multiple sources who said the behavior is unprecedented for an official in her position. . . .

Efforts by the former Obama administration to obtain the names of Trump allies included in raw intelligence reports have fueled speculation that subsequent leaks to the press were orchestrated by the former administration and its allies in a bid to damage the current White House and smear Trump’s most senior confidantes.

For example, this Committee has learned that one official, whose position had no apparent intelligence-related function, made hundreds of unmasking requests during the final year of the Obama Administration. Of those requests, only one offered a justification that was not boilerplate and articulated why that specific official required the U.S. person information for the performance of his or her official duties.

That person, the one “whose position had no apparent intelligence-related function,” is believed to be Obama U.N. Representative, Samantha Power.

This is outrageous and despicable.

Interestingly, her attorney denied that she committed any of the leaks, but did not deny that she was the one implicated in the Washington Free Beacon report and Chairman Nunes’ letter.

Sometimes what’s not said is more important than what is.

In the midst of misinformation and doublespeak, the ACLJ is pressing forward to get to the bottom of this latest shocking and embarrassing story, and to keep the pressure on to hold this lawless behavior accountable.

Today we took our next big step.

We sent what is now our third FOIA request to the NSA, seeking:

records pertaining to any and all requests former United Nations Ambassador Samantha Power made to National Security Agency (“NSA”) officials or personnel regarding the “unmasking” of the names and/or any other personal identifying information of then candidate and/or President-elect Donald J. Trump, his family, staff, transition team members, and/or advisors who were incidentally caught up in U.S. electronic surveillance.

We laid out several specific requests to make sure we cover all possible angles. Here’s one example:

All records, communications or briefings created, generated, forwarded, transmitted, sent, shared, saved, received, or reviewed by any NSA official or employee, where one communicant was former United Nations Ambassador Samantha Power, including any communications, queries or requests made under an alias or pseudonym, and another communicant was the Director of the National Security Agency, the Chief of the Central Security Service, SIGINT production organization personnel, the Signals Intelligence Director, Deputy Signals Intelligence Director, or the Chief/Deputy/Senior Operations Officers of the National Security Operations Center, or any other NSA official or employee, referencing, connected to, or regarding in any way communication, request, query, submission, direction, instruction, or order, whereby Samantha Power sought access to or attempted to access SIGINT reports or other intelligence products or reports containing the name(s) or any personal identifying information related to [various individuals connected to President Trump] whether incidentally collected or otherwise . . . .

In the mean time, Attorney General Sessions recently announced that his Department of Justice is stepping up the investigations into illegal leaking.  This is something we’ve been calling for and we applaud his announcement.

The momentum continues to build, and the ACLJ will stay at the forefront of the battle to protect the Constitution, defend our national security, fight government corruption, and demand accountability.  We must preserve the integrity of our nation’s intelligence and national security apparatus. If we fail, the consequences would be devastating.
——
Join us. Sign our Petition today.