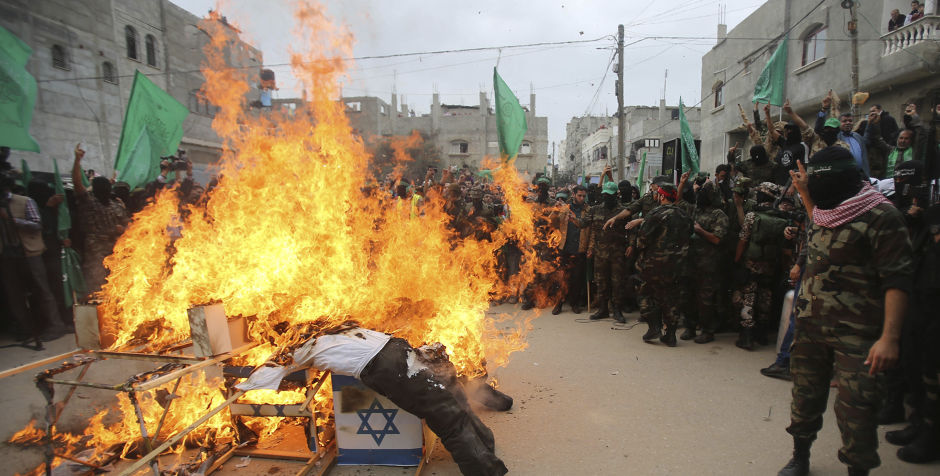 It is no coincidence that one month after beginning negotiations with Iran over the nuclear deal (the JCPOA), with a goal of lifting sanctions, Iranian-backed terrorists attacked Israel.  It is not happenstance that mere weeks after the Biden Administration renewed financial aid to the Palestinian Authority (PA) and its “pay for slay” terrorist subsidies that Palestinian terrorists fired thousands of rockets on civilians in Israel.

In short:  We begin talks with Iran.  We give the PA cash.  Iran supports the PA, the direct heir of the Palestinian Liberation Organization (PLO), a terrorist organization.  In the name of the Palestinians, Hamas—the premier Middle East terror group along with Hezbollah—purchases rockets and rocket technology from Iran.  Thus, the region is on fire and innocent Israelis and Palestinians are killed and wounded.

The nexus of violence and terrorism in the Middle East is Iran and its relationship with the Palestinian leadership and other proxies in the region. Palestinian leaders have rejected every overture toward peace offered by Israel.  They have consistently rejected every peace agreement negotiated by the international community under the auspices of the United States.  For decades, no offer of self-governance or even a two-state solution has been acceptable to the Palestinian leadership.  Meanwhile, the Palestinian people suffer because of the intransigence of their supposed leaders—leaders who become independently wealthy by lining their personal pockets with funds from nations which sincerely want to help.  It is an ugly picture.  Unfortunately, it is a true and accurate picture.

Why is this the case?  The answer is complicated and multi-faceted.  In short, however, it is because the Palestinian Authority, Hamas, Hezbollah, and Iran have this in common:  They want the complete destruction of the nation of Israel.  It is ultimately not about land.  It is about eliminating the presence of Jews in that land.  Do you doubt this?  Look at the rhetoric and the official statements from these entities.

Read, for example, the Charter of Hamas.  Take note of this horrific statement: “The Day of Judgment will not come about until Muslims fight Jews and kill them. Then, the Jews will hide behind rocks and trees, and the rocks and trees will cry out: 'O Muslim, there is a Jew hiding behind me, come and kill him.'” (Article 7) Or this: “[Peace] initiatives, and so-called peaceful solutions and international conferences are in contradiction to the principles of the Islamic Resistance Movement. . . . Those conferences are no more than a means to appoint the infidels as arbitrators in the lands of Islam. . . . There is no solution for the Palestinian problem except by Jihad. Initiatives, proposals and international conferences are but a waste of time, an exercise in futility.'” (Article 13)

Consider the Palestinian Authority’s support of recent violent riots in East Jerusalem that were the excuse given by Hamas for the rocket attacks on Israel.  Contrary to what one might hear in the media, this controversy is not about Jews stealing Palestinian property or land through evictions.  It is an ordinary property dispute being handled in the court system.  The laws in Israel are designed to be fair regardless of one’s ethnicity.  The properties in question were deeded to Jewish families dating back to 1875.  Until 1948, the neighborhood called Sheikh Jarrah was inhabited by Jews and Arabs.  Jordan invaded Israel in 1948 and expelled every Jewish resident.  When Israel unified Jerusalem in 1967, ending Jordanian occupation, the government had to decide what to do with the properties.  If the property was transferred to a Palestinian (even though it was done through force of war), Israel has respected the property rights of the Palestinian owner.  However, where title to the property was not transferred, Israel is returning the real estate to the original Jewish owners, respecting the unbroken title of the plaintiffs in these cases.  It has nothing to do with religion or ethnicity.  Israeli courts even treat the Palestinian squatters as “protected tenants” and allow them to stay there if they pay rent.  The problem is they have refused to pay rent to the rightful owners and also refuse to leave.  The legal issue is one that any landlord would make.  The only objection to this case by Palestinian leaders and the Left-leaning media is this:  The owners are Jews.

Nonetheless, the riots by Palestinians ensued, with support by their leaders and much of the media.  And Hamas joined in on the matter by attacking Jews in Israel with high-explosive rockets.  Israel is defending its citizens.  Hamas has refused to stop the rocket attacks.  Each time they fire rockets (over 3,000 since May 10th), Israel responds.  Israel never targets civilians.  Hamas fires the weapons from schools, hospitals, and apartment buildings with civilians as human shields.  Israel warns the civilians to clear the targeted areas with what is deemed “roof knocking”; however, many times Hamas soldiers refuse to let the civilians leave and seek shelter.  It is a travesty and a human rights abuse by Hamas that is outrageous.  And when Hamas rockets misfire, they often land in Gaza, killing or injuring their own people.  However, Hamas takes photos of killed or injured civilians and uses the photos to solicit sympathy for themselves and condemnation of Israel.

To their credit, the Biden Administration has proffered their support for Israel to defend itself.  Secretary of State Anthony Blinken, whatever his personal views, has refused to demand that Israel stop attacking Gaza.  Standing up to pressure from the U.N. Security Council, the Biden Administration blocked a biased statement on the fighting.  For this, all freedom-loving people are grateful.  If terrorists were firing rockets into Washington, D.C., or New York City, the U.S. would be attacking those launching the rocket attacks as well.  This is a matter of self-defense.

What the Biden Administration must also do is stop negotiating with Iran, who is the main power behind the violence.  They deserve the moniker of the world’s leading “state sponsor of terrorism.”  The Administration must also respect the Taylor Force Act which forbids financial aid to the Palestinian Authority as long as they pay those who kill Israeli and U.S. citizens, the infamous “pay to slay” program.  As of now, the PA continues to pay terrorists who commit these acts and to offer stipends to the families of these terrorists.

The locus of the terrorist acts against Israel (and against Saudi Arabia which has been repeatedly attacked by the Iranian proxy Houthi Rebels in the past week, something overshadowed in the media due to the violence in Israel) is Iran, Hamas, Hezbollah, the Islamic Jihad group in Gaza, and the Palestinian leadership.  These groups conspire in their murderous actions and have the blood of thousands on their hands.  They are the source of terrorism in the region.  We must stand together against them and in support of our allies in the area, especially Israel and the Arab Gulf States.