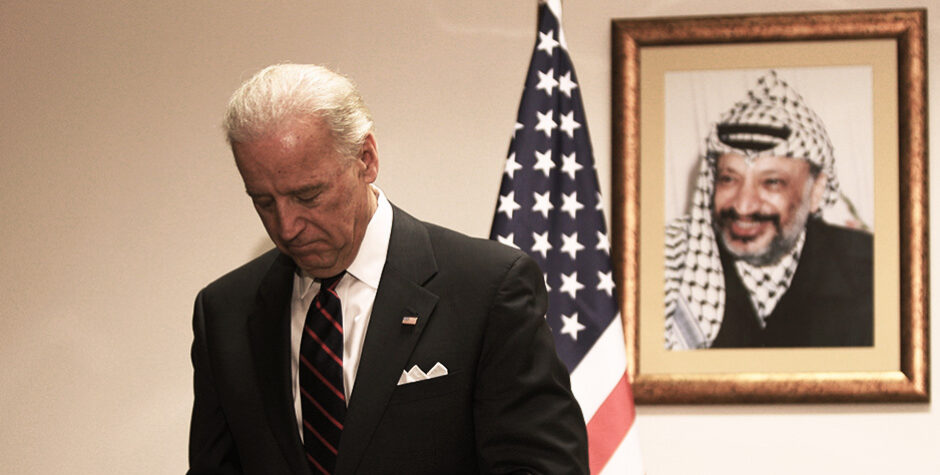 President Biden has essentially smacked every brave U.S. soldier and veteran in the face with his plan to send U.S. tax dollars to the Palestinian Authority which openly uses them to pay terrorists for killing Americans.

The ACLJ just took action, filing a critical lawsuit over this offensive attempt by the Biden Administration to fund coldblooded terrorists and violate federal law.

As we recently told you, the Biden Administration has quietly notified Congress that it intends to distribute $125 million in aid to "Palestine" – a terrorist-supporting non-State that continually threatens and attacks our ally Israel – reportedly to "regain their 'trust and goodwill' after the Trump-era cuts." The taxpayer-funded assistance package was set to take effect on April 10th.

The most nefarious thing about President Biden’s plan is that this means the U.S. will resume sending taxpayer funding to the Palestinian Authority (PA), even though the PA has ties to terrorist groups like Hamas. And worse, the president of the PA, Mahmoud Abbas, has vowed to continue its deadly “Pay for Slay” program, which pays millions of dollars to terrorists’ families for the killing of American and Israeli civilians.

By sending money to the PA, President Biden is directly violating the Taylor Force Act, a federal law which prohibits funding for the PA until it permanently ceases its behavior of incentivizing martyrs, i.e., terrorists. The ACLJ has long supported cutting off U.S. aid to the PA until the pay-for-slay bureaucracy is dismantled and the laws governing it are repealed.

As we’ve previously explained, the Taylor Force Act was named after an American veteran, Taylor Force, who was brutally murdered while studying abroad in Israel in an attack by a Palestinian jihadist:

In March 2016, a Palestinian terrorist went on a killing spree through the streets of Jaffa Port in Tel Aviv, Israel’s second largest city. Before being killed by police, he stabbed ten innocent civilians, including an American citizen, Taylor Force, who died before reaching the hospital. Mr. Force was a West Point graduate, a Field Artillery Officer in the U.S. Army, and served in both Iraq and Afghanistan. He was in Israel as part of his MBA program at Vanderbilt University. He was survived by his wife, who was also injured in the terror attack.

Rather than condemn this horrific and cowardly jihadist act, the PA praised the terrorist as a martyr in its official media and awarded his family a generous lifelong stipend. This stipend is enshrined in the laws of the PA. It is designed to encourage individual acts of terrorism against Israel and its allies in the name of Palestinian independence.

The PA praised the despicable murderer and is paying his family a lifetime stipend. This should make every American’s blood boil. But now President Joe Biden, who claims to care about Americans, wants to send the PA our tax dollars, which they will use to subsidize this vile practice.

PA leader Abbas has promised that the “Pay for Slay” program will continue no matter what:

Based on President Biden’s plan, Abbas won’t need to worry about their last penny. The PA will receive millions of American tax dollars to reward its murderers and terrorists. We cannot and will not allow the Biden Administration to fund terror and disgrace our brave servicemen or any other victims of the “Pay for Slay” program.

We filed a Freedom of Information Act (FOIA) request asking for all State Department records, communications, or briefings created, shared, sent, received, forwarded, or reviewed by any State Department official regarding in any way: U.S. aid or funds of any kind being given to the Palestinian Authority, communications in reference to the Taylor Force Act, the issue of allowing the PLO mission to reopen in the United States, and any records about former Secretary of State John Kerry’s potential involvement (or anyone acting on his behalf) on any of the above issues.

But once again, the Biden Administration is not cooperating. The President’s team seems to have a philosophy of “if we ignore the problem, it will go away.” Unfortunately for them, that’s not going to happen.

The ACLJ just filed a FOIA lawsuit against the Biden State Department in federal court. If they won’t work with us willingly, we’ll see them in court. Our lawsuit requests that the court order the Biden Administration to cooperate with our FOIA and provide any and all documents requested in a timely manner.

Sending aid money to the Palestinian Authority is a violation of the Taylor Force Act (you can read our legal analysis here), and there must be accountability from the White House and the State Department. We will expose the President’s plan to help bankroll terrorists.

The Taylor Force Act corrected a profoundly immoral policy that had American taxpayer funds being laundered unwittingly through PA accounts to incentivize murder. The bill also offered a simple litmus test of the PA’s seriousness about making peace: If the PA cannot revoke the laws and infrastructure conferring special treatment for terrorists, then the PA itself remains an obstacle to the “peace process.” . . .

[And i]f the Biden Administration tries to run around the [Taylor Force Act], it will be guilty of money laundering for terrorists.

As Americans we owe it to Taylor Force, his family, and every member of the U.S. military to make sure this crucial law is upheld and the Biden Administration does not help the PA put a target on their backs and incentivize would-be terrorists.

Stand with us to defend our troops and innocent Israeli civilians. Sign our petition.