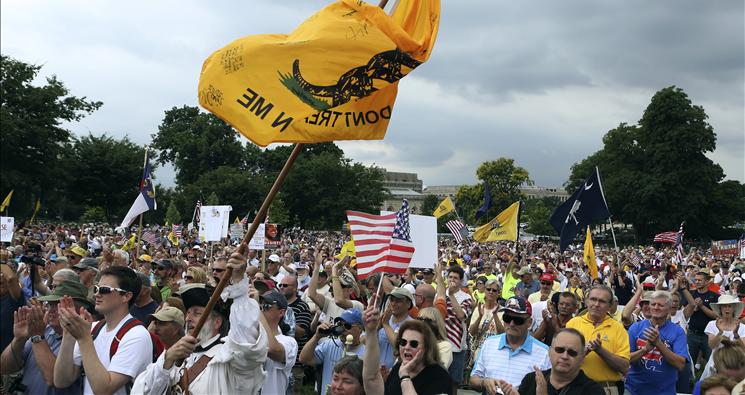 “[M]y realm was so low down, and after the initial review of the case, which was, you know, within 3 days after assignment, I became less and less aware of whatever happened above me,” he told congressional investigators.

Wait, isn’t this the guy the leading Democrat on the House Committee on Oversight and Government Reform, blamed the entire scandal on, said conservatives were leading a “witch hunt,” and said case “solved”?

Pouring over the more than 200 pages of transcripts Representative Elijah Cummings (D-MD) released in an ill-advised attempt to insulate President Obama and end the inquiry doesn’t accomplish the Left’s goal, but does reveal some very eye-opening details.

What Representative Cummings focuses on, however, in these 200 plus pages of transcripts is the initial case.  This is how he and his allies on the Left claim it all began, but even that leaves more questions than answers.

Mr. Shafer said that he “became aware” of what he called the first “Tea Party” case on or before February 25, 2010, when “an agent who worked for me” “came to my office” and expressed concerns about “a case that had been assigned to him” “because of media attention that he had seen, he had concerns about this being a high-profile case.”

He explained that “in the past, we’ve had high profile cases that were centered around celebrities, for example . . . .”  In “this particular instance,” he said, it was “high profile” because it was “something that was having media attention; in other words, it was in the newspaper quite a bit about, you know, Tea Party cases or Tea Party organizations.”  He said that this “type of case may be considered a high-profile case, and that — and that’s the major — that’s probably the reason that was submitted up the chain to make a determine by EO Technical eventually, not because of the issue of the political activity.”  He explained that determination was made “[b]ecause that was the direction that I had been given about cases that demonstrated the potential to be high-[profile] case.”

He said that the same day it was brought to his attention, he sent this particular “high profile” case to his supervisor in California.  She in turn sent it up the chain to the EO Technical unit in Washington, D.C.  The very next day, February 26, 2010, he received a response: “EO Technical would like the case. Please thank [the agent who initially flagged it] for identifying the issue and elevating it.”  He said that EO Technical also told him, “I think sending it up here is a good idea, given the potential for media interest.”

He further explained, “My job was to review these situations, and I would elevate them for someone who would make their decision.  It was not my position to evaluate if something made sense or not.”

He and his team then packaged that one case up and sent it to EO Technical within weeks, by late February or early March 2010.

He said that after “EO Technical said yes, this is a high profile case, we want that, in my mind is that is we found another one or someone came to me the next day with another one that had the same issues in this case then it would lead me to say . . . I need to check to see if this high profile case, which was similar to the one the accepted, you know, if they want that one also.”  So On March 16, 2010, he sent an email up the chain that “we have identified a total of 10 Tea Party cases.”

There was more back in forth waiting for further direction, but by mid to late 2010, he had been told that all Tea Party cases should be sent to group 7822, which is what his team continued to do until at least March of this year when he was reassigned to another group.  He said that after that point he didn’t see the cases, they went straight from his screeners to group 7822, and that he was unaware what criteria they were using but assumed the BOLO list that was eventually created was a factor.

His answer to questions about criteria used to screen Tea Party cases, other than emphatically stating that he did not develop criteria, was to state that he was “unaware” of how determinations were made.  Essentially, he was doing what he was told, without question, because it came directly from Washington.

Once the applications were assigned to group 7822, he stated that he was unaware of what happened to them or what process they went through.

This one manager’s testimony cannot be viewed in a vacuum.  It raises more questions than answers.  It does not address how the BOLO list was created, why applications were delayed, who developed the unconstitutionally intrusive questions, or any definitive answers about the complexities of this scandal.  In fact, it calls in to question claims that the targeting ended in 2012, as we have seen evidenced by letters the ACLJ’s clients continue to receive.

The investigation is far from over.  Conclusory statements from Members of Congress laying blame on low-level employees, accosting those performing the investigation, releasing full transcripts that could cloud the testimony of future witnesses and interviewees is in itself a political stunt.

The American people deserve better.  We deserve the truth.  The victims deserve the abuse to end, and the respect of their government.

This article is crossposted at RedState.com