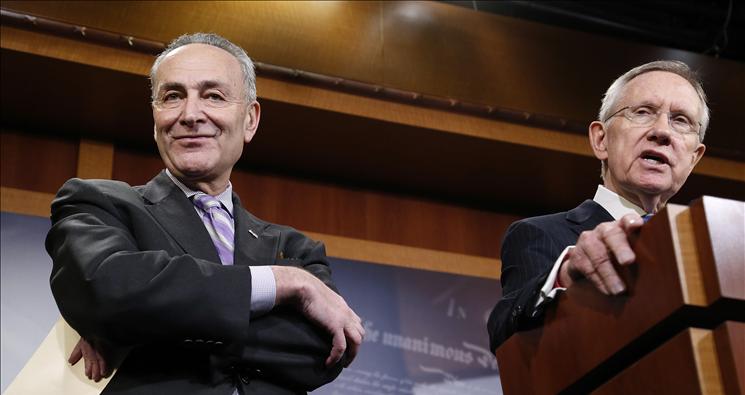 Now that that the Obama Administration has determined, after a "thorough" investigation conducted by a partisan political donor, that targeting the Tea Party for their political beliefs isn't criminal, Senator Chuck Schumer is back to his old antics.

Sen. Schumer is calling for the IRS to renew its targeting of the Tea Party and to "redouble those efforts immediately."

He didn't mince words or hide his utter disdain for the Tea Party, stating that he hoped to "exploit" the "core weakness of the Tea Party," its belief in limited government.

As one of the Left's leading proponents of using the IRS to give conservative groups extra scrutiny, Sen. Schumer believes in anything but limited government. He is seeking to once again use the expansive coercive reach of the most powerful agency in the federal government to snuff out political competition:

"It is clear that we will not pass anything legislatively as long as the House of Representatives is in Republican control, but there are many things that can be done administratively by the IRS and other government agencies—we must redouble those efforts immediately," Schumer said.

"One of the great advantages the Tea Party has is the huge holes in our campaign finance laws created [by] the ill advised decision [Citizens United v. Federal Election Commission]," Schumer said. "Obviously the Tea Party elites gained extraordinary influence by being able to funnel millions of dollars into campaigns with ads that distort the truth and attack government."

Schumer went on to say, "The Tea Party rank-and-file know it's a different America . . . . It looks different; it prays different; it works different." This a fact the IRS apparently already knows since it has been asking groups about "the content of their prayers."

Lest one think Schumer may have been referring to benign, evenhanded regulations of campaign finance reform, these comments were made in a speech to the liberal group Center for American Progress in a speech entitled, "The Rise of the Tea Party and how Progressives can Fight Back."

How do progressives fight back? They use they use the IRS to target their political opponents.

It's despicable partisan rancor that tears at the heart of our free republic - the core of democracy.

This has become the new mantra of the Left: if you don't like what your political opponents stand for, silence them. It's the same tactic being used by the pro-abortion Left.

As the Left prepares IRS Targeting 2.0, we're directly challenging the Obama Administration's scheme in court, demanding accountability. We will not rest until these outrageous attempts to target and silence conservatives are ended. The IRS must never again be used to target Americans for their beliefs.