In our ongoing lawsuit against President Obama’s State Department over the Iran lie, we have received definitive evidence that the Obama Administration intentionally manipulated the public video record of a press briefing – deleting a portion in which it admitted lying to the American people about the Iran nuclear negotiations.

The document – a “sensitive but unclassified” internal review of the matter by the U.S. State Department – contains a section expressly notated: “Evidence of Purposeful Editing.”

The State Department’s own internal evidence shows that a technician in the Public Affairs (PA) office of the State Department “received a request to edit the video over the phone from a female caller from elsewhere in PA who could credibly assert that an edit should be made.” Additionally, the report presents definitive testimony that “the requester had mentioned in the course of the call a Fox network reporter and Iran. The technician indicated that the requester may also have provided the start and end times for an edit . . . .”

This is the clearest evidence yet that the Obama Administration’s State Department intentionally edited the video, deleting this critical exchange from the public video record.

As we previously explained, an exchange between Fox News’ James Rosen and State Department spokesperson Jen Psaki mysteriously disappeared from the video of the State Department’s daily Press Briefing on Dec. 2, 2013.  The exchange exposed a lie:

ROSEN QUESTION: Is it the policy of the State Department, where the preservation or the secrecy of secret negotiations is concerned, to lie in order to achieve that goal?
MS. PSAKI: James, I think there are times where diplomacy needs privacy in order to progress. This is a good example of that. . . .

The Administration initially claimed that the deletion was an unintentional “glitch.” Our media team analyzed the video and the “white flash” edit, determining that this could not possibly be simply a glitch. Turns out our media team was spot on accurate and the State Department was wrong. The deletion to cover up the Iran lie was intentional, and now we have the evidence to prove it.

The pertinent excerpt from the memo is below. You can download the entire “sensitive” internal State Department memo – released to the ACLJ as part of our ongoing Freedom of Information Act (FOIA) lawsuit against the State Department over its refusal to rightfully release these documents to the American people – here.

Evidence of Purposeful Editing. A technician from PA recalled having received a request to edit the video over the phone from a female caller from elsewhere in PA who could credibly assert that an edit should be made. Given the passage of time, the technician's memory was imperfect. The technician did not recall the identity of the caller and the Department has been unable to ascertain it independently through interviews or document review. The technician believed that the call likely came late in the day, well after the briefing would have ended. The technician did not believe the call had come from the Spokesperson. The technician did not recall a reason being given for the edit request, but did believe that the requester had mentioned in the course of the call a Fox network reporter and Iran. The technician indicated that the requester may also have provided the start and end times for an edit, though the technician also recalls consulting the written transcript to locate the exchange. Although the technician recalled seeking approval from a supervisor, when interviewed the supervisor did not recall that exchange or anything else about the video. The technician also recalled adding a white flash in order to make clear that footage had been removed. However, that technician does not usually engage in any editing, and is usually not involved in the daily press briefing video processing until several steps into the process of preparing the video for web distribution.

It may have taken until the final hours of the Obama Administration for the American people to begin to understand the truth behind the Obama Administration’s deliberate deception surrounding the deadly Iran nuclear deal. But our critical legal work to unearth the truth will continue. It will be absolutely crucial to undoing the damage done by this flawed deal and dismantling the devastating impact the “deal” continues to have.

Unfortunately, many of the documents we have received from the State Department look like this: 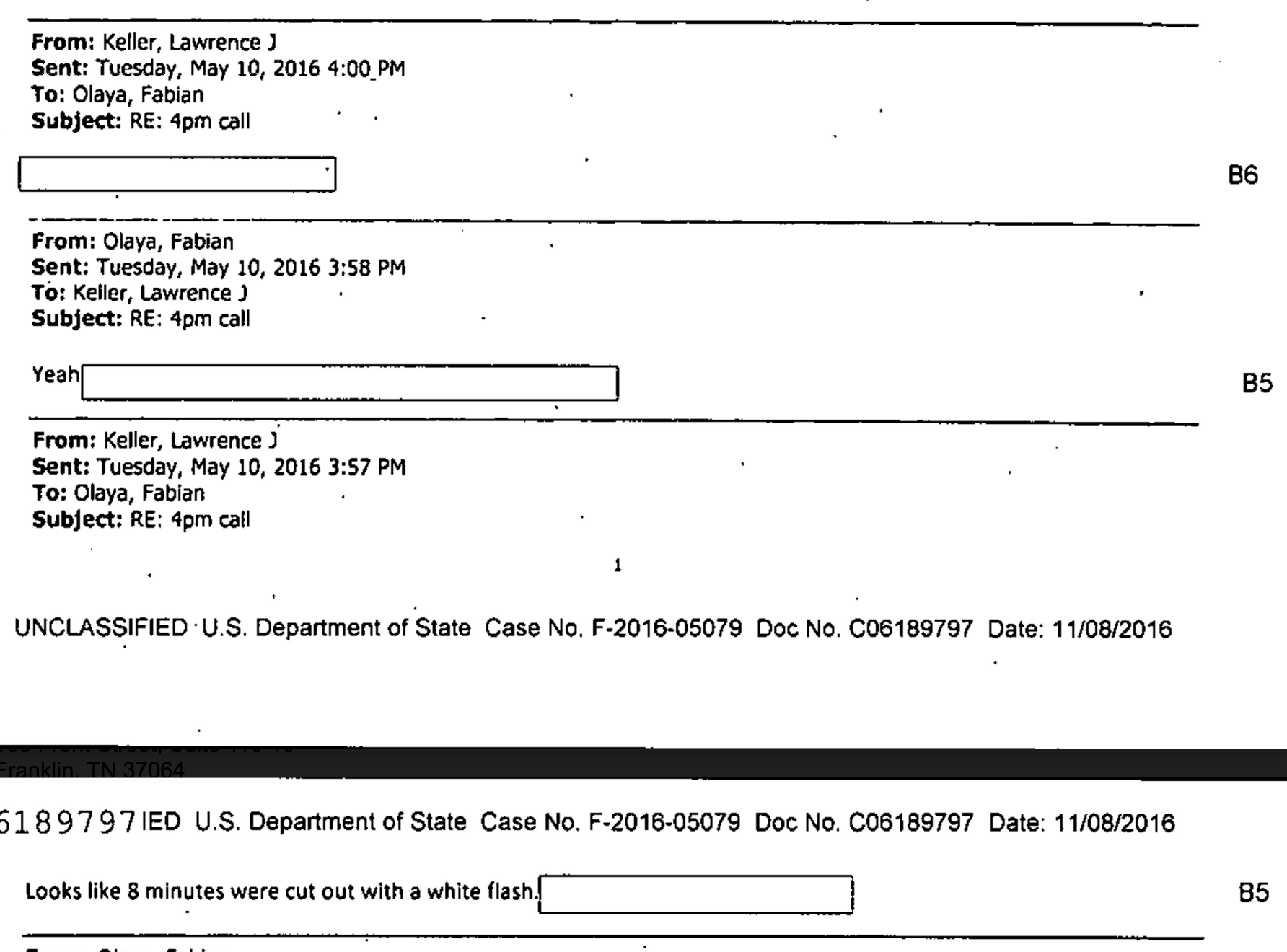 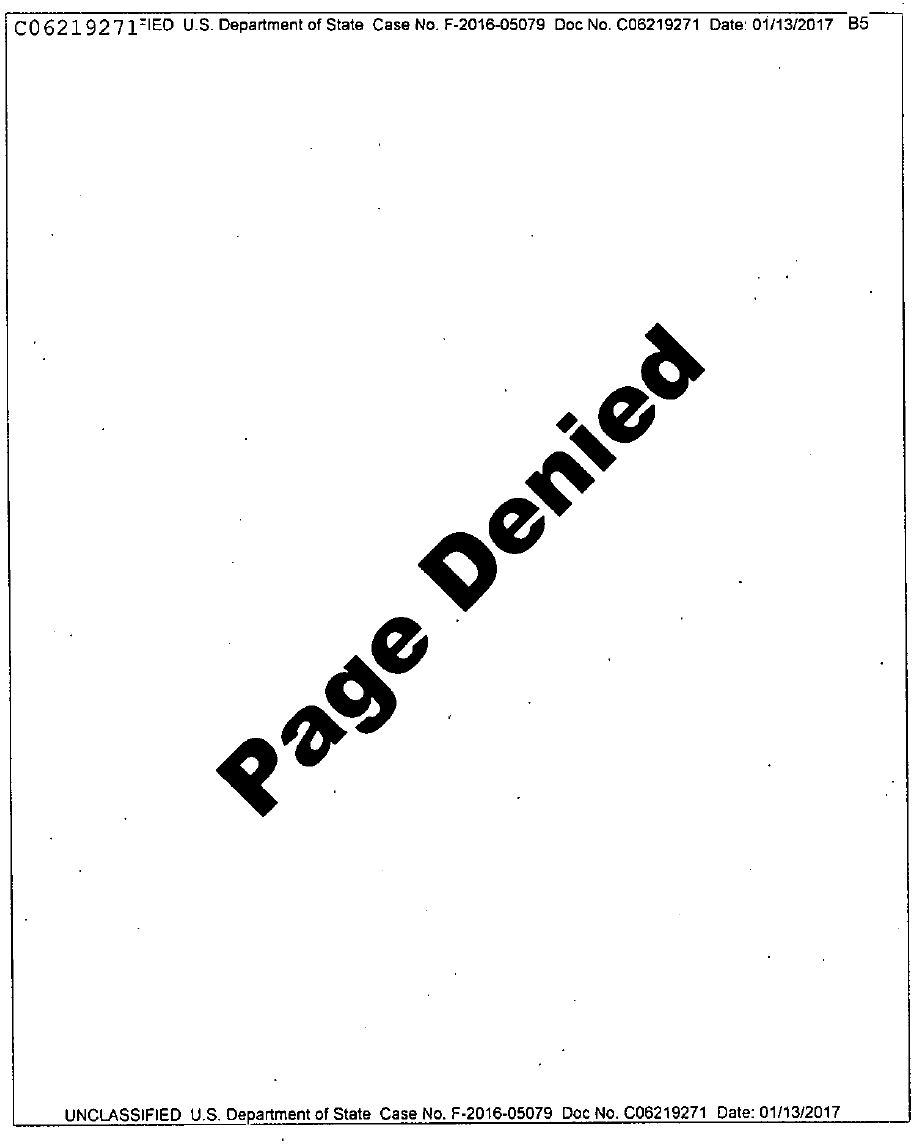 Long after the Obama Administration has left office, we will be battling the out-of-control bureaucracy that will remain entrenched and immovable without our aggressive litigation.

We expect to receive more evidence from the State Department in the coming days and weeks as this case continues.