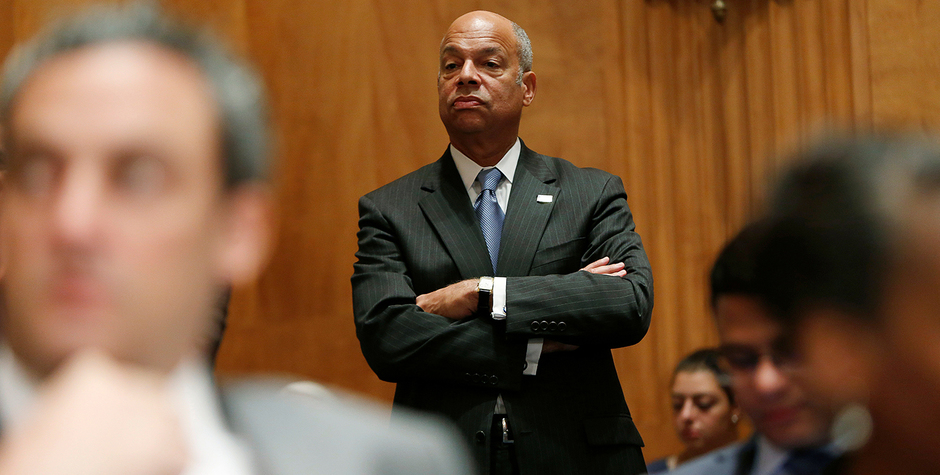 As we reported last week, the Obama Administration has committed still another act of reckless incompetence jeopardizing our national security. This time, the Secretary of Homeland Security testified to Congress that he did not know whether any of the people wrongly granted U.S. citizenship were from Libya or Syria or other countries of national security concern.

This is not okay. Secretary Jeh Johnson is the head of the U.S. Department of Homeland Security. This is a cabinet level position. His department is tasked with the national security of the United States.

We cannot allow this to continue. This week the ACLJ’s Government Accountability Project has taken action yet again. We will find out what Secretary Johnson knew and when he knew it.

In a time where ISIS (the Islamic State) publicly proclaims it is infiltrating Western nations through immigration and government leaders of Western nations are warning that it is, in fact, happening, our nation must be extra vigilant against these clear and present dangers to our national security.

Here’s how CNS News reported the exchange:  On Tuesday, September 27, 2016, “Homeland Security Secretary Jeh Johnson told Congress the actual number is ‘somewhere around’ 750. But Johnson could not say how many of them were from countries known to be havens for terrorists.”

“Were any of them from special interest countries?” Sen. Ben Sasse, a member of the Senate Homeland Security Committee, asked Johnson.

“Not off hand,” Johnson replied. “I – I can’t – I can’t give you that breakdown offhand. It is a – I suspect it is a knowable fact, which we can provide you.”

“Were any of them from Iran, Syria, or Libya?” Sasse asked Johnson.

“How – how would you not know that?” Sasse asked. “Why would that not be something that’s urgent to you to understand the categories under the 700 – ”

“Oh, yes. It’s a knowable fact,” Johnson repeated. “I can get you the information. Just sitting here right now, I don’t have the list in front of me. You know, I don’t want to be wrong.”

“Do you think any of them were terrorists?” Sasse asked.

“I have no basis to believe that any of them were terrorists or suspect terrorists,” Johnson said.

Sasse asked Johnson, “Is there any more important defense than knowing if any of those 750 were terrorists or likely terrorists?”

“I agree with you,” Johnson replied. “I agree with your question, sir. And that’s why we are going through this process right now to investigate each one of these cases using the resources we have.”

Sasse followed up: “But in the 11 days, or whatever it’s been since the I.G. made your department aware of the problem, you didn't think to ask if any were from Libya or Syria?”

How embarrassing. This is unbelievable.

Even worse, we know for a fact from the Inspector General report referenced by Senator Sasse that at least two of the aliens wrongly granted citizenship were being investigated for ties to terrorism.

The American people deserve the truth. And we are demanding answers.

This week, the ACLJ submitted a new set of Freedom of Information Act (FOIA) requests to the Obama Administration. In these requests, sent to the Department of Homeland Security and a number of its “components,” we demanded:

any and all records, communications or briefings sent from, prepared by, sent to, received by, reviewed by, or in any way communicated to or by U.S. Department of Homeland Security (“DHS”) Secretary Jeh Johnson, his aides, staff, agents or representatives, pertaining to the subject matter of the DHS Office of Inspector General (“OIG”) Report, Potentially Ineligible Individuals Have Been Granted U.S. Citizenship Because of Incomplete Fingerprint Records, OIG-16-130, released September 8, 2016, regarding actions of DHS, U.S. Citizenship and Immigration Services (USCIS), U.S. Immigration and Customs Enforcement (“ICE”), and the DHS Office of Operations Coordination (“OPS”), mistakenly granting citizenship to a number of individuals from “special interest countries.”

We also sent this FOIA request to the United States Citizenship and Immigration Services (USCIS), Immigration and Customs Enforcement (ICE), Customs and Border Protection (CBP), and 4 other offices under DHS’s control.

Secretary Johnson told Congress he did not know if any of the individuals who successfully gamed our broken and incompetently managed immigration system were from Libya or Syria. If this is true, it demonstrates unpardonable ineptitude. If, on the other hand, it is not true, it demonstrates yet another example of despicable dishonesty by the Obama Administration.

We have sent FOIA requests to DHS to uncover its efforts to remove “offensive” references to Islamic or Arabic phrases from its documents, including critical training materials for intelligence and law enforcement personnel. And we’ve sent FOIA requests to the Obama Department of Justice and FBI to reveal the deception behind its decision to scrub the Orlando jihadist’s 911 transcript of references to Islam or ISIS, and to translate the phrases uttered in Arabic into English. We’ve also sent FOIA requests to the DOJ and FBI to shine light on former President Bill Clinton’s secret meeting with Attorney General Loretta Lynch on her airplane just days before his wife was “interviewed” by the FBI concerning her use of a private email server to send or receive classified documents.

Our Government Accountability Project is pressing forward. In our great nation, we have the ability – and an obligation – to keep our government accountable to we the people. We must not abrogate that responsibility and we must not take it for granted. We will continue to press forward, but we need your support. We need your voice. Sign our Petition to hold the lawless Obama Administration accountable today.