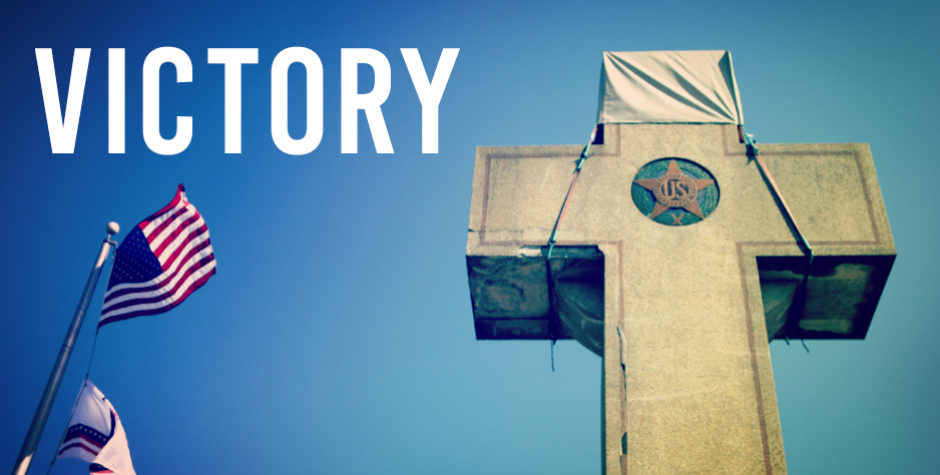 The Supreme Court: A Victory for World War I Cross Memorial

Supreme Court: A Victory for World War I Cross Memorial

Today, by a 7-2 vote, the Supreme Court upheld the constitutionality of the Bladensburg Peace Cross. Speaking for the majority of the Court, Justice Alito eloquently wrote:

The cross is undoubtedly a Christian symbol, but that fact should not blind us to everything else that the Bladensburg Cross has come to represent. For some, that monument is a symbolic resting place for ancestors who never returned home. For others, it is a place for the community to gather and honor all veterans and their sacrifices for our Nation. For others still, it is a historical landmark. For many of these people, destroying or defacing the Cross that has stood undisturbed for nearly a century would not be neutral and would not further the ideals of respect and tolerance embodied in the First Amendment. For all these reasons, the Cross does not offend the Constitution.

Today’s decision is a victory for the Cross, the country, and the Constitution.

As explained in more detail here and here, the Peace Cross in Prince George’s County, Maryland has stood for nearly one hundred years in commemoration of forty-nine servicemen who perished in World War I. At the base of the Cross, a plaque lists the names of the dead, with the words: “the heroes of Prince George’s County Maryland who lost their lives in the Great War for the liberty of the world.” Four words are inscribed on each face of the monument’s base: “valor, endurance, courage, devotion.”

Over time, other monuments were erected in the area close to the Peace Cross. In 1944, a monument was created to honor local men and women who died in World War II. In 1983, a monument was constructed to honor veterans of the Korean and Vietnam Wars. Other memorials placed in the park, in the vicinity of the World War I monument, include a commemoration of the War of 1812, the victims of Pearl Harbor, and those who lost their lives on 9/11.

Claiming to be offended and upset when viewing the Cross, a group of agrieved individuals and the American Humanist Association filed suit nearly ten years ago. They argued that the display of the Peace Cross on government land violates the First Amendment’s Establishment Clause and had to be torn down.

When the Fourth Circuit Court of Appeals ruled in favor of the offended “humanists,” holding that the Cross was an impermissible endorsement of Christianity, the American Legion asked the Supreme Court to intervene. Today, in upholding the Peace Cross, the American Legion has been vindicated.

On behalf of Marine Lt. Gen. Robert Blackman (Ret.) and over 230,000 ACLJ members, we filed an amicus brief in support of the American Legion and the Cross. Our brief argued that the 1971 Supreme Court decision of Lemon v. Kurtzman—relied on by the Fourth Circuit in ordering that the Peace Cross be dismantled—has been harshly criticized for decades and should be abandoned by the Court. (The so-called “Lemon test” requires (1) a secular purpose; (2) that the principal or primary effect be one that neither advances nor inhibits religion; and (3) that the governmental practice not create an excessive entanglement with religion.)

We also argued that the Court should abandon “offended-observer” standing, i.e., the ill-founded theory that one can challenge a religious display (such as a cross, a Ten Commandments monument, a nativity scene, etc.) in federal court for no other reason than one is offended by it. Even though the Supreme Court rejected an offended observer’s case in a 1982 Establishment Clause decision, that decision has been ignored time and again in both the lower courts and the Supreme Court itself.

In today’s decision, which rejected applying the Lemon test to the Peace Cross, but unfortunately did not explicitly scrap Lemon in its entirety, Justice Alito observed that “the [Lemon] test has been harshly criticized by Members of this Court, lamented by lower court judges, and questioned by a diverse roster of scholars.” Noting Lemon’s “shortcomings,” and the fact that the Court has in practice either “ignored it” or “expressly declined” to apply it, Justice Alito continued, “the Lemon test presents particularly daunting problems in cases, including the one now before us, that involve the use, for ceremonial, celebratory, or commemorative purposes, of words or symbols with religious associations.”

Justice Alito put forth four reasons why there should be a “presumption of constitutionality for longstanding monuments, symbols, and practices,” such as the Peace Cross: (1) in the case of “monuments, symbols, or practices that were first established long ago,” it is “especially difficult” to identify whether “their original purpose or purposes” was wholly religious or not; (2) in the case of longstanding monuments, “the purposes associated with an established monument, symbol, or practice often multiply”; (3) “[w]ith sufficient time, religiously expressive monuments, symbols, and practices can become embedded features of a community’s landscape and identity,” and that the “community may come to value them without necessarily embracing their religious roots”; and (4) removing a monument with both religious and historical associations may no longer be neutral with respect to religion, but “will strike many as aggressively hostile to religion.”

In sum, when it comes to historical displays with both religious and secular components, “the passage of time gives rise to a strong presumption of constitutionality.” That is a powerful statement of law that will go far to protect monuments such as the Argonne Cross in Arlington National Cemetery, the Irish Brigade Monument in Gettysburg, longstanding displays of the Ten Commandments on government property, and so forth. Groups like the American Humanist Association and the ACLU will not be happy with that conclusion.

An African-American offended by a Confederate flag atop a state capitol would lack standing to sue under the Equal Protection Clause, but an atheist who is offended by the cross on the same flag could sue under the Establishment Clause. Who really thinks that could be the law?

While it would have been better if a majority of the Court rejected the ability of merely offended individuals to sue under the Establishment Clause, Justice Gorsuch has planted an important seed. Just as prior separate opinions by Justices Scalia and Kennedy helped shape today’s decision upholding the Peace Cross, Justice Gorsuch’s opinion might one day in the future persuade a majority of the Court to do the right thing and reject “offended-observer” standing in Establishment Clause cases. It may also persuade the lower courts to rethink that doctrine before the Supreme Court chooses to tackle the issue head-on. (Whether “offended-observer” standing is consistent with the Constitution was not a formal question presented to the Court by the parties.)