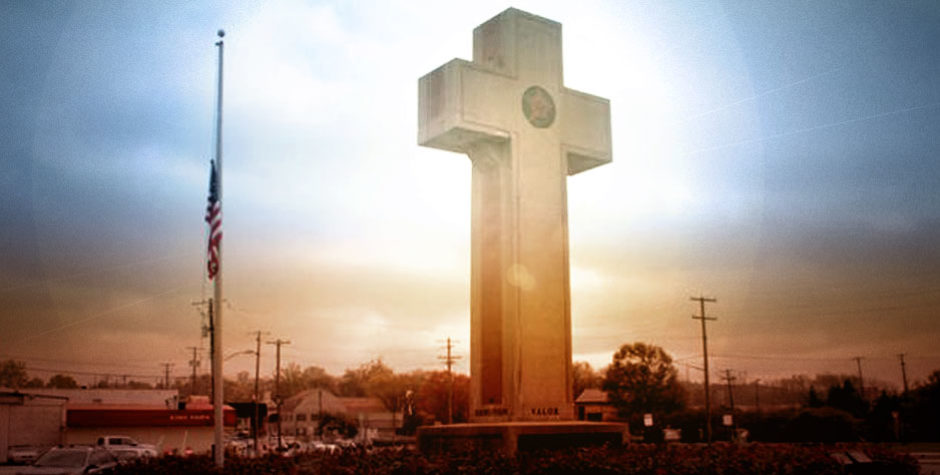 The U.S. Supreme Court has announced it will decide whether a war memorial cross is constitutional under the First Amendment.

As explained in more detail here, the Bladensburg Peace Cross was funded and erected nearly a century ago by the American Legion and others to commemorate the lives of local servicemen who made the ultimate sacrifice in World War I. The cross, along with other monuments in the vicinity that memorialize other armed conflicts, has long been a location for Veteran’s Day and Memorial Day ceremonies, as well as other civic gatherings.

In 2014, several generations after the Peace Cross was first installed, the American Humanist Association (“AHA”) and a group of individuals filed a federal lawsuit challenging the constitutionality of the monument. One of those plaintiffs, who passes by the cross when running errands in the area, is “personally offended” by the cross and “feels excluded” by the message he thinks it conveys.

After losing in the district court, where Judge Chasanow correctly ruled that the monument did not violate the Establishment Clause, the Fourth Circuit Court of Appeals gave the AHA the victory it was seeking. The Fourth Circuit held that, because a “reasonable observer would fairly understand the Cross to have the primary effect of endorsing religion,” the monument was unconstitutional and had to be dismantled. It ordered the district court to consider whether the arms of the cross should be “remov[ed]” or the cross entirely “raz[ed],” or other “arrangements [could be made] that would not offend the Constitution.”

Contrary to the plainly erroneous decision of the Fourth Circuit, a longstanding war memorial does not “offend the Constitution” by virtue of it being in the shape of a Latin cross, a common and well-known symbol of sacrifice, honor, and respect. What truly offends the Constitution in this case is not the Bladensburg Peace Cross, but the decision of the Fourth Circuit striking it down.

Indeed, the purpose behind the Establishment Clause was not to create “a wall of separation between church and state.” (As the Sixth Circuit Court of Appeals once noted, “this extra-constitutional construct has grown tiresome.”) The very same Congress (specifically, the First Congress) that approved the language of the Establishment Clause also provided for the appointment of chaplains in the U.S. Senate and House of Representatives. In fact, on the very same day that it approved the Establishment Clause, the First Congress also passed the Northwest Ordinance, providing for a territorial government for lands northwest of the Ohio River, which declared: “Religion, morality, and knowledge, being necessary to good government and the happiness of mankind, schools and the means of education shall forever be encouraged.”

The Establishment Clause was originally adopted—as the very word “establish” obviously suggests—to prohibit the government from establishing a religion as the official religion of the country. Using a cross to honor the lives of 49 World War I soldiers from the local community is hardly tantamount to establishing Christianity as the official religion of Prince George’s County, Maryland. The kind of religious establishment prohibited by the First Amendment entails (among other things) coercing individuals to support or participate in religious practices—or punishing them for failing to do so. The Peace Cross clearly does nothing of the sort.

While Supreme Court decisions over the decades have expanded the Establishment Clause beyond its original meaning, creating a jurisprudence that Justice Thomas recently said is in “disarray,” the Court has nonetheless repeatedly acknowledged that “religion has been closely identified with our history and government,” “[o]ur history is replete with official references to the value and invocation of Divine guidance,” “[w]e are a religious people whose institutions presuppose a Supreme Being,” and “[t]he history of man is inseparable from the history of religion.”

Recently, and in keeping with a correct and historically-based understanding of the Establishment Clause, the Supreme Court held that local governmental bodies may begin legislative sessions with religious invocations, including sectarian ones. If legislative prayer, even a sectarian one, is constitutionally permissible because it “expresses a common aspiration to a just and peaceful society,” then it stands to reason that a publicly displayed symbol, even a sectarian one (in the eyes of some people) can be used for the same or a similar purpose.

While crosses have obvious sectarian symbolism in some contexts (such as in a cathedral), the message of the Peace Cross is not one of religious evangelization or proselytization. The message of that particular cross is, quite simply, to honor those soldiers from Prince George’s County who perished in the Great War, recognizing their valor, endurance, courage, and devotion (four words written in stone at the base of the cross).

As Justice Kennedy wrote in an opinion involving another World War I cross (a decision nowhere mentioned by the Fourth Circuit!):

a Latin cross is not merely a reaffirmation of Christian beliefs. It is a symbol often used to honor and respect those whose heroic acts, noble contributions, and patient striving help secure an honored place in history for this Nation and its people. . . . It evokes thousands of small crosses in foreign fields marking the graves of Americans who fell in battles, battles whose tragedies are compounded if the fallen are forgotten.

In deciding whether the Peace Cross can continue to stand in Bladensburg, Maryland, the Supreme Court will also decide the fate of similar monuments, markers, and statues throughout the country, such as the memorial war crosses found in Arlington National Cemetery. The Court must put an end to the anti-religious heckler’s veto, where one offended individual can use litigation to tear down a beloved monument not to his liking or that is hurtful to his feelings. The Establishment Clause was not intended to be weaponized in this fashion.

We will keep you posted as this critical case moves forward in the Court—from briefing, to oral arguments, to a final decision by the end of June 2019. The ACLJ will be proud to submit an amicus brief in support of those defending the Peace Cross before the Court. (Our previous amicus brief in support of the cross can be found here.) It is the least we can do to honor those fallen heroes that the Peace Cross commemorates.

As Veterans Day and the 100th anniversary of the armistice that ended WWI is just days away, join us in honoring the heroes that this cross represents and add your name to our brief through our Committee to Defend the Cross and Honor Heroes below.