On the Brink of Disaster: 20 Christian Churches Attacked in Egypt | American Center for Law and Justice
Search  |  Logout  |  Login  |  Register 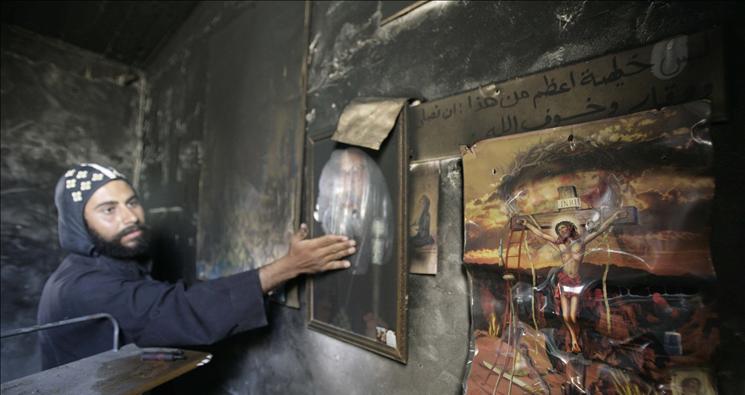 On the Brink of Disaster: 20 Christian Churches Attacked in Egypt

Yesterday, in the course of a few hours, according to International Christian Concern, Islamists in Egypt have violently attacked over 20 Christian churches.  The deadly violence by Islamists has claimed more than 100 lives, leaving nearly 1000 more wounded. And while interim President Adly Mansour has now declared a nation-wide state of emergency in Egypt, we must ask ourselves, what will it take to protect the religious minorities from this religious cleansing?

Christians have suffered intense persecution ever since the Muslim Brotherhood ascended to power, and many Muslim radicals blame the Coptic Christian community for the Muslim Brotherhood’s recent overthrow.  Left unchecked, Muslim radicals could launch a killing spree, initiate a campaign of ethnic cleansing, or – at worst – mass killings.  Even a cursory reading of the headlines shows that the Christian community is on the brink of disaster.

Just days after a 10-year-old Christian Egyptian girl was gunned down by Islamists while returning with her pastor from Bible study class, Christians in Egypt fear for their lives as their children, homes, places of worship, and places of business are targeted by Islamists.

Fr. Ibram Tamesy, of the Church of Saint Mary and Anba Ibram in the village of Delga in the Minya province, told ICC that a mob broke into the church and looted the contents, including the food collected for the poor. Then they looted and burned the home of Fr. Angelos, who also serves at the church, and the homes of 17 other Christians in the village.

“The loudspeaker systems from the mosques were being used to tell the Muslims to gather at Ebad El Rahman and defend Islam because many Muslims had been killed at the Rabba and El Nahda sit-in,” Fr. Tamesy said. The mob, further incensed after gathering went on to loot and set fire to the Monastery of St. Mary and its three churches, he reported. The Mar Mina church and a Baptist church, also in the Minya province, were burned in attacks by pro-Morsi supporters.

The Islamists have not stopped at just churches, but have also attacked Christian homes, cars, and Christian Bibles Societies throughout Egypt.

The Good Shepherd Church, monastery, and Christian school were all set ablaze in Suez City. The Bible Society headquarters in Cairo were attacked. In Alexandria, the churches of Saint Maximus and Mar Girgis were burned. The crowd of Morsi supporters “burned the car of the Fr. Mosa and another car owned by a servant in the Church, and, after that, they broke into the Church and burned it and they were chanting Allah Akbar,” Wissa Fawzy, a Christian in Alexandria, told ICC.

On July 3, 2013, when Egypt again saw a revolution to overthrow the Morsi government, Christians and Muslims stood side-by-side demanding that all Egyptians, regardless of their faith, be equally represented in the laws and by the government officials of Egypt.  Today, President Barak Obama appropriately condemned the violence against peaceful protesters and recognized that some protestors had attacked churches, but his statement fell short of standing with the Coptic Christians in Egypt who have been the target of violent Islamists. When will world leaders boldly stand against the violent Islamists?

World leaders could take a note from the words of America’s Third President, Thomas Jefferson: “All, too, will bear in mind this sacred principle, that though the will of the majority is in all cases to prevail, that will to be rightful must be reasonable; that the minority possess their equal rights, which equal law must protect, and to violate would be oppression.”

It is time for us, every citizen of the world, to stand boldly and loudly against the persecution of Christians. Let it not take one more burnt church or the death of one more young child for our hearts to be awakened to the plight of Christians in Egypt.  For as Elie Wiesel encourages mankind, “[Swear] never to be silent whenever and wherever human beings endure suffering and humiliation. We must take sides. Neutrality helps the oppressor, never the victim. Silence encourages the tormentor, never the tormented.” Do your part to awaken those whom you know, your family, your friends, your community.