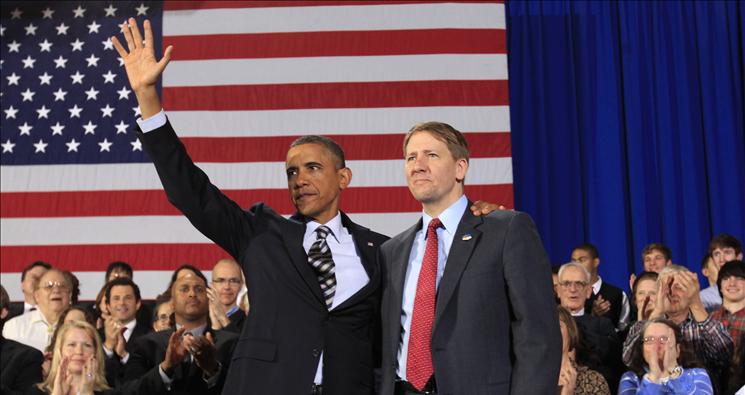 President Obama is creating a constitutional crisis with the four “recess appointments” he made yesterday, bypassing the authority of the U.S. Senate. His unconstitutional actions contradict centuries of precedent, as well as recent legal analysis by both the Clinton and Bush White House counsel’s office and President Obama’s own statements as a U.S. Senator.

In 2010, President Obama’s Deputy Solicitor General Neal Katyal specifically told the Supreme Court that the official legal position of the Obama White House is that a President can not make an appointment unless the Senate is in recess more than three days. He stated:

The -- the recess appointment power can work in -- in a recess. I think our office has opined the recess has to be longer than 3 days. And -- and so, it is potentially available to avert the future crisis that -- that could -- that could take place with respect to the board.

When such a blatant violation of the Constitution occurs, one of the most common defenses is that the Constitution is unclear, or that it is too vague or confusing, thus offering opportunity for some to “interpret” the Framers intent. In a sense, that is the defense put forward by those who support the President’s unprecedented action. They say that it is a technicality, and that the President is free to make these appointments because the Senate is only conducting Pro Forma sessions.

There’s one significant problem with that argument, and it is that this is far from a technicality, and in fact is abundantly simple and spelled out very clearly in the Constitution. Anyone who takes just a minute or two to read the relevant portions should come away with the same conclusion. Allow me to explain (and if you’d like your own copy of the Constitution to follow along with, you can get a free copy here in our critical resource Foundations of Freedom).

So, clearly, the President has sound constitutional authority to make recess appointments. And Presidents from both parties have done so. It is a clear grant of power to the President under the Constitution.

However, Article 1, Section 5 of the Constitution provides that “Each House may determine the Rules of its Proceedings.” This includes the right to determine when to recess. Decades of legal precedent and accepted practice -- by both political parties -- is that consent from both chambers of Congress is required for any recess to take place, and absent such consent, each chamber must continue to meet. That is precisely what has been occurring over the last few weeks. No recess resolution has been agreed to; both the House and the Senate have been gaveling in for just a few moments of a Pro Forma session every few days, effectively blocking President Obama’s ability to make recess appointments.

It is also relevant to point out that this exact tactic was used in 2007 and 2008 when President Obama was a U.S. Senator to block the possibility of recess appointments by President George W. Bush. It has been anything but a one-sided partisan tactic. There are plenty of reasonable people who don’t like either the President’s power under the Constitution to make these appointments or the Congress’ power under the Constitution to stop them. But the bottom line is that the Constitution specifically grants each of these powers, and unless a constitutional amendment is achieved, both powers must be respected.

President Obama is well-versed on these issues. He’s been a constitutional law professor, he’s participated in the process as a U.S. Senator, and now he’s the President of the United States. In fact, he called recess appointments the “wrong thing to do” and that such appointees are “damaged goods” that “have less credibility.”

This is not an act of ignorance. It is an intentional power grab that ignores the Constitution and Senate precedent, and is likely intended to achieve a showdown with Congress for political purposes. It is a dangerous game for our nation, especially if it is played merely for political gain.

Court challenges to this radical expansion of Presidential powers are already being discussed, and we are evaluating what legal actions are available.

Every American – Republican and Democrat - should read Article 2, Section 2 and Article 1, Section 5 of the Constitution, and should demand that the President retract these appointments. Likewise, every Member of the House and Senate from both parties should stand up and defend the rights of the Legislative Branch under the Constitution. We must not let one man cripple the Constitution’s authority on the important matter of separation of powers.