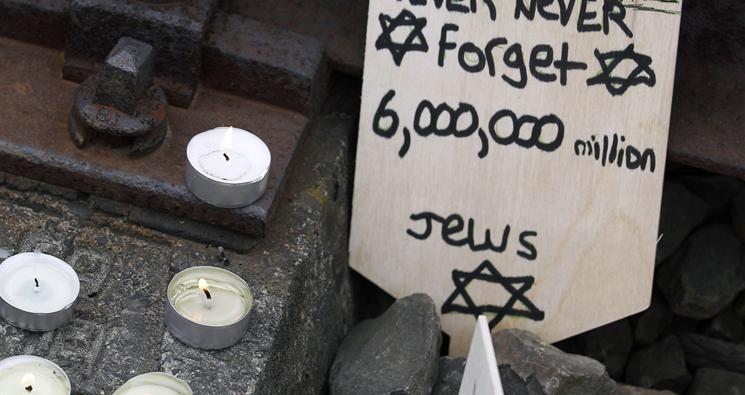 The Freedom From Religion Foundation (FFRF) – an angry atheist group with a long track-record of failure in its attempt to remove every vestige of our religious heritage from public life – has a new target, Holocaust survivors.

Ohio, is erecting a first-of-its-kind Holocaust memorial at its statehouse.  It is meant to honor the Holocaust survivors and the millions who were killed in what may be the greatest atrocity in human history.  It also seeks to remember and memorialize the brave Americans who fought and died to defend and set millions of Holocaust survivors free from Nazi concentration camps.

FFRF is demanding that the memorial never go up, that it not be allowed to honor the memory of the millions of Jews who were tortured and killed in concentration camps because the memorial includes a Star of David.

This atheist group has gone after our national Motto, “In God We Trust,” and other symbols of our heritage.  In fact, their most recent court loss was an ill-fated attempt to tear down a six decades-old World War II memorial.  Their vitriolic and hateful rhetoric is typically aimed at Christians.  This time, however, it is aimed at the Jewish people – not just the Jewish people but Holocaust survivors.

FFRF claims that the inclusion of the Star of David as a part of the Holocaust memorial is “exclusionary” and a “dishonor”.

It is an unmistakable historical fact that the Holocaust was the deliberate attempted extermination of the Jewish people by the Nazis.  Two-thirds of all European Jews were slaughtered in genocide the likes of which the world had never seen.

Six million Jews died in the Holocaust, and the Freedom From Religion Foundation has the unmitigated gall to say that the inclusion of the Star of David in a memorial to them is a “dishonor”?

This Orwellian attempt to whitewash history is disgraceful.

Freedom From Religion Foundation actually compares the murder, torture, and genocide of millions of people by the Nazis to their legal battles which they insultingly boast are their efforts to prevent “a similar holocaust on our shores.”  They directly compare the Holocaust to legal battles in America over the separation of church and state.  Freedom From Religion Foundation’s rhetoric is reprehensible; some might call it anti-Semitic.

And reprehensible rhetoric is all it is.  The law does not support them.  In fact, the facts do not even support them.  The atheist group claims that the inclusion of the Star is to the exclusion of the non-Jews who were victims of the Holocaust.  Yet, the inscription on the memorial specifically recognizes not only the six million Jews who suffered but “millions more” including dissidents, prisoners of war and other minorities “who suffered under Nazi Germany.”

FFRF’s letter argues that the inclusion of the star is “a potentially unconstitutional entanglement of government and religion” because the star itself “contributes to the appearance of the endorsement of religion.”  In essence, their legal argument is that the inclusion of the Star of David in the Holocaust memorial is merely a pretext to unconstitutionally display a religious symbol on public property.

Let me be more direct in responding than their inarticulately crafted attack.  The Star of David in a Holocaust memorial does not violate the Constitution.  Period.

The Supreme Court has made clear that the Constitution’s “goal of avoiding governmental endorsement does not require eradication of all religious symbols in the public realm.”  And in this case, the Star of David is far from a strictly religious symbol.  It is the symbol emblazoned on the Israeli flag.  It is a symbol of the Jewish people.  It is the symbol the Jews were forced to wear during the Holocaust itself.  It is a historically significant symbol which cannot be allowed to be stricken because it offends a few atheists.

The victims, the families, and the survivors of the Holocaust deserve to be treated better.  They deserve to have the Star of David honor their memory.