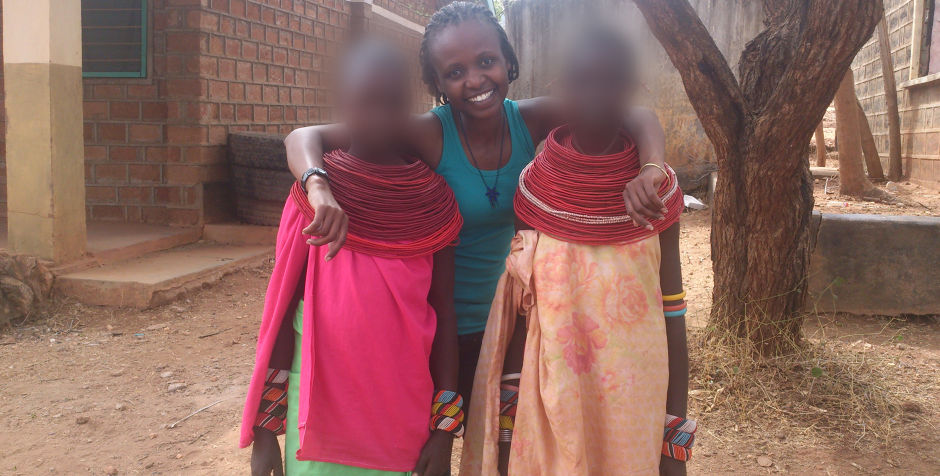 Rescuing Child Brides in Kenya from the Clutches of Evil

One of our international affiliates in Africa, the East African Centre for Law and Justice (EACLJ), just assisted in rescuing two young girls facing mutilation and a form of sex slavery as child brides, and our legal team is working to end this barbaric practice.  The following is a report from our office in Kenya:

Between 10 to 14 years old, young girls usually have big dreams and actively work hard to join good high schools and further their education, in a bid to better their life. Reality for girls from Samburu, a county in northern Kenya, looks much different. At the age of 10 years, and sadly sometimes even younger, a Samburu girl is prepared for marriage to be the second, third, or even fourth wife to a man who is often the same age as her father and in some cases grandfather. These young girls are married off in exchange for just eight cows, which is given to the girl’s father and uncles as a bride price.

On July 7, 2015, following a partnership with Josephine Kulea of the Samburu Girls’ Foundation, the East African Centre for Law and Justice (EACLJ) staff travelled to Samburu County to rescue two young girls from such a fate.  When we arrived, one of the girls, just 13 years old, had already been married off to the area chief, who is a 53-year-old man. The second girl was scheduled to be married off just four days later.

It is important to note that when a girl is married in the Samburu traditional culture, she is forced on the morning of the ceremony to undergo the gruesome practice of Female Genital Mutilation (FGM), an act that is against the law in Kenya. She is then handed over to her new “husband.”

Unfortunately, the young girl forcibly married to the chief had already undergone FGM and was living with the chief. ON July 8, 2015, with the help of Mararal Police, we rescued this young girl.  As a result, the police detained her “husband”, the area chief. She was later taken to hospital for a medical checkup, where the doctors determined she suffered from anemia due to loss of blood during the FGM process.

The following day, the chief was arraigned in court and charged with marrying an underage girl and aiding in the FGM of the young girl. He pleaded not guilty and the court handed him a 700,000 shillings bond, plus a surety of the same amount. The case will proceed in August 2015.

The second girl was to be mutilated on the following Saturday morning and we therefore had to act fast and reach the place before the marriage ceremony took place. We were able to rescue her on July 10, 2015, a day before her intended wedding and FMG ceremony. Thankfully, this young girl’s extremely brave and caring brother assisted in her rescue by hiding her from their father and bringing her to the District Officer’s (D.O.) office to wait for our team.

Both girls are now in a private and secure school where they will be cared for and provided educational opportunities.  Despite their past traumas, we hope and believe they will now be able to dream of a future full of opportunity.  The EACLJ is ready to continue being part of the rescue missions and help save the girls of Samburu, one at a time.

To date, Josephine Kulea of the Samburu Girls Foundation has managed to save over 200 girls from early marriages, beading, and FGM. To do this she relies on good will from family members and neighbors who report such cases to her before and after they happen. These rescues are complicated by poor roads and poor communication networks in Samburu County. Culturally, such rescues are viewed as betrayals of local customs and traditions. Yet, the EACLJ is committed to partnering with Josephine Kulea and the Samburu Girls Foundation to rescue more girls, ensuring that each girl is given a chance to dream.

The EACLJ will also engage legally, using the judicial system to create a deterrent for such illegal behavior. On July 27, 2015, the EACLJ will file to join a Constitution Petition at the Nakuru High Court as Interested Parties. The petitioners in this case seek to bar the Magistrate Court, the Director of Public Prosecution, and the Police in Mararal-Samburu from prosecuting a 54-year-old man who married a 14-year-old girl. The EACLJ will argue why such prosecutions are mandated under both Kenyan law and its international obligations to protect the innocence of young girls within Kenyan borders..

The EACLJ is committed to providing protections for innocent children, dismantling an environment of impunity for child marriage and FGM, and protecting the gallant government officials who seek to protect the life, freedom and liberty of the Samburu girls.