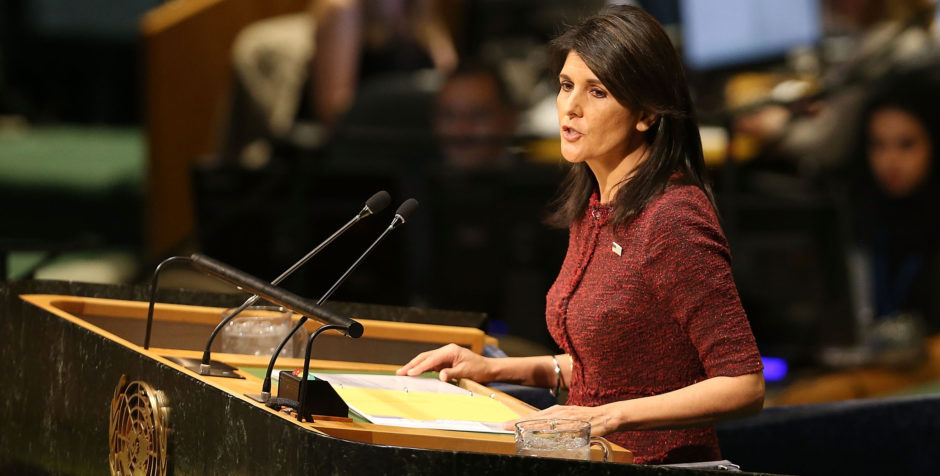 It’s Time for the United Nations to Unite with America

Time for the U.N. to Unite with America

It is high time that the United Nations either begins to work with the United States, particularly in the fights against terrorism and human rights abuses, or else lose their U.S. tax dollar funding.

According to a recent memo, U.S. Ambassador to the United Nations, Nikki Haley, has proposed cutting funding to countries that consistently vote against American interests at the U.N.. The move would echo the President’s State of the Union address where he appealed to Congress to pass legislation to “ensure American foreign-assistance dollars always serve American interests and only go to America’s friends.”

Haley’s plan would cut funding to any country that votes against U.S. interests. According to news site Foreign Policy, who reviewed the 53 page memo entitled “America First Foreign Assistance Policy,” it states: “It is the opinion of the U.S. mission to the U.N. that all U.S. foreign assistance should be reevaluated to ensure that taxpayers dollars are spent to advance U.S. interests, not to fund foreign legacy programs that provide little or no return on investment.”

This policy gives us sovereignty in how our money is spent. For years we have sent hundreds of millions in foreign support to countries who have in turn resisted our policy requests, practically thumbing their noses at us while taking our money. This decisive switch suggests a complete re-evaluation, starting at zero and deciding based on vote history and actions what monies, if any, each nation will receive. Countries who have repeatedly opposed the United States, even going as far as condemning us - such as Palestine who already lost tens of millions in aid for denouncing the President’s recognition of Jerusalem - are unlikely to receive any financial support going forward. Nor should they.

According to The Times of Israel, this memo specifically calls out countries who have received U.S. aid but consistently voted against us and programs we have funded. It includes a $4.9 million school construction program in Ghana, a $6.6 million climate change program in Vietnam, and $3.1 million job training program in Zimbabwe. According to the memo, in 2016 the U.S. doled out a total of $580 Million to these three countries alone. While Ghana has voted with us a little more than half the time (54%), Vietnam supported us only 38% of the time, and Zimbabwe a paltry 19%.

It is absurd to continue rewarding countries that have defiantly opposed us on such a drastic basis. Like Pavlovian Conditioning, we are training them to continue challenging us when we should only be giving to countries who support us. This policy should have been adopted decades ago.

At the ACLJ, where we have an office in Zimbabwe, we see firsthand the difficulties the U.N. opposition causes. This new policy would be an incredible aid to our work in the heavily Christian nation.

We are continually appearing before the UN appealing for assistance in human rights cases, such as imprisoned missionaries and persecuted Christians. If the U.S. adopts this policy, it would certainly be a boon to our crucial work at the ACLJ if some of these countries were incentivized to listen and intervene on our behalf. Even now we are preparing to make oral arguments before the U.N. Human Rights Council (HRC) to ask for intervention in Pakistan to stop the violence committed against Christians. In a strange twist, our presentation has been stalled out due to a staff strike announced in Geneva at the HRC.

The United Nations is essential to our efforts to defend the liberty and safety of Christians around the world, but only when we have their support. When the U.N. is more favorable to the United States interests, that will aid the efforts of the ACLJ immensely. We will continue to monitor this situation as well as how countries vote in regard to American interests, and be prepared to take our own action to support this policy.