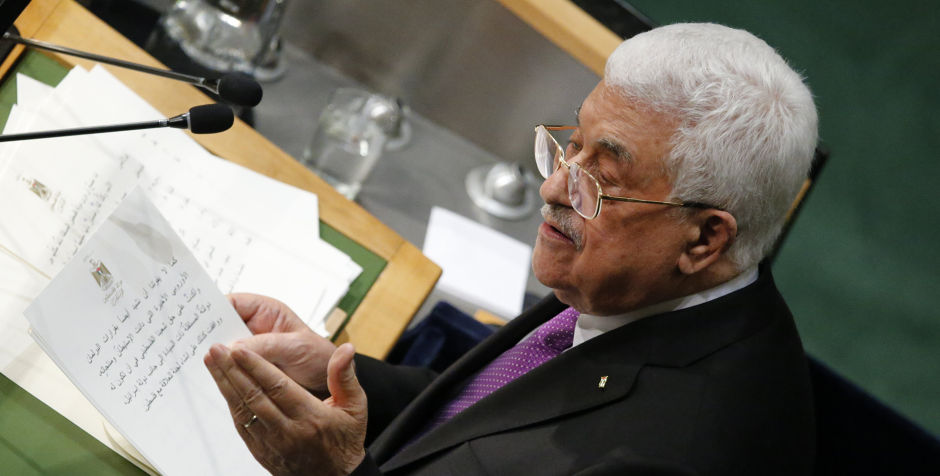 Implications of the Palestinian Repudiation of the Oslo Accords

Implications of the Palestinian...

On September 30, 2015, Mahmoud Abbas, President of the Palestinian Authority, addressed the UN General Assembly in his role as “President of Palestine.” In his UN address, Mr. Abbas recited his rendition of the history of Palestine and, as he so often does, accused Israel of all manner of violations of various agreements entered into between Israelis and Palestinians while claiming that the Palestinians desired nothing but justice and peace.

How easy it is to forget the thousands of rockets fired at Israeli civilian settlements from Palestinian Gaza! The only word that can even begin to describe such a litany of straight-faced half-truths and outright untruths is that fine Yiddish word chutzpah!

It takes considerable practice to deliver lies and half-truths so convincingly. It doesn’t hurt either when most of one’s audience is made up of individuals obtuse to the concepts of truth, justice, and the rule of law. Such persons take neither the time nor the effort to separate fact from fiction. Instead, they are conditioned like Pavlov’s dogs to respond positively to any tidbit of anti-Israel propaganda, no matter how obviously wrong and outrageous such propaganda may be.

One of the most interesting (and significant) revelations in Mr. Abbas’s address was his public repudiation of the Oslo Accords and their corollary agreements. The Oslo Accords have formed the framework within which the final peace between Israelis and Palestinians was to be achieved. Over the years, both sides have accused the other of violating the agreements. Yet, despite the fact that the Oslo Agreement was to have achieved an independent Palestinian state by 1999, until yesterday, neither side had repudiated the agreement, primarily because, imperfect though it was, it was the basis upon which the progress that has been achieved was achieved. In other words, despite its imperfections, real progress had been made under the Oslo Accords.

The unilateral repudiation by the Palestinians of the Oslo Accords should give us pause to reevaluate U.S. policy vis-à-vis the Israeli-Palestinian conflict.

We must reject once and for all the manipulative games the Palestinians play.

The United States must once again recognize where our true interests lie and stand strongly with Israel.