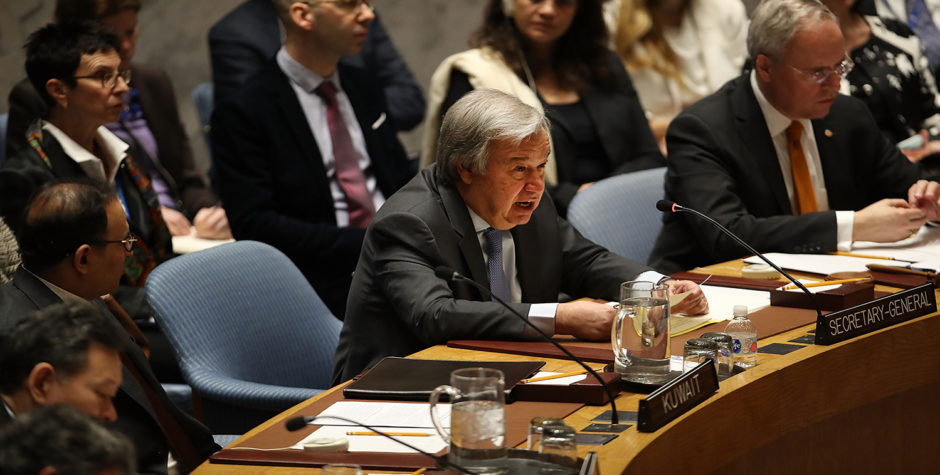 As we have previously told you, your voice was essential in the passage of U.N. Security Council Resolution 2379. This resolution is a vital step in providing the relief that Christians and other religious minorities in Iraq so desperately need and the justice they most assuredly deserve. It is also a crucial step in sending the message that such barbaric behavior will NEVER be tolerated.

As part of our ongoing advocacy campaign to end the genocide of Christians in the Middle East and provide the relief that the victims so desperately need, we have sent numerous letters to key U.N. officials. We sent a letter to then-U.N. Secretary-General Ban Ki-Moon, requesting that the U.N. formally recognize that the atrocities being committed by ISIS against Christians in Iraq and Syria constituted genocide.

We then sent a legal letter to Fareed Yasseen, Ambassador of the Republic of Iraq to the United States, where we urged him to “make whatever demands or submissions necessary to the United Nations to initiate and request the international community to honor its commitments under the Convention on the Prevention and Punishment of the Crime of Genocide.”

In our effort, we continued to reach out to the international community by sending letters to the government of the United Kingdom and other key world leaders as well as to the newly elected Secretary-General of the U.N., António Guterres, bringing to their attention the atrocities ISIS has been committing against Christians other religious and ethnic minorities.

We then sent a follow-up letter to the U.N. Secretary-General’s Special Adviser for the Prevention of Genocide, Adama Dieng. He quickly responded informing us that he had shared some of our key policy recommendations with the Iraqi government. We also received a response from the U.K. informing us that it was working with Iraq to draft a new U.N. resolution.

In a recent development, the Secretary-General has submitted to the Security Council his Terms of Reference. Those Terms of Reference have now been approved by the Security Council.  This means that the Secretary-General is now empowered to select his Special-Adviser who will be in charge of creating an investigative team and can now begin to collect and preserve evidence of the ISIS genocide.

This past week we sent another letter to the U.N. Secretary-General, António Guterres, thanking him for submitting his Terms of Reference and urging him to be diligent in swiftly picking the right person to see that this critical job gets done. We wrote:

Now that the Security Council has approved your Terms of Reference, we respectfully and solemnly urge you to expeditiously appoint a Special Adviser who can then begin to immediately assemble an Investigative Team to collect and preserve evidence of the ISIS genocide. As evidence collection is crucial for holding ISIS members accountable for their egregious actions and crimes as well as bringing justice to the victims, it is imperative to begin this process without delay.

We also urge you to make the influence and resources of your esteemed Office available to the Special Adviser and do all in your power to ensure thoroughness in the collection, documentation, and preservation of evidence to prosecute these grotesque ISIS atrocities, including genocide, as required by Security Council Resolution 2379 and the Terms of Reference. This critical investigation will no doubt provide your Office with resources necessary to protect the victims of these atrocities in fulfillment of the international community’s responsibility to protect. We thank you for your commitment to this issue and for your continuing attention to our concerns.

We will continue to advocate on behalf of the Christians who have been facing the ISIS genocide in order to get them the relief they so desperately need.