Just when you thought we’d get through this confirmation hearing in a classy way, Judge Amy Coney Barrett gets hit with repulsive questions.

On today’s Jay Sekulow Live/The Logan Sekulow ReProgram, we talked about the first day of questioning by the Senate Judiciary Committee. We had hoped that this one was going to be tame, but it turned ugly when Democrat Senators asked Judge Amy Coney Barrett some repulsive, unnecessary questions.

Today is actually the third day of the confirmation hearings of Judge Barrett. Yesterday was essentially the first real day of questioning, and there was actually back and forth interaction between Judge Barrett and the members of the Senate Judiciary Committee. She didn’t just have to sit there and listen to the Senators make statements as she did Monday.

After Day One, we were all expecting the questioning phase to be somewhat mild. And for the most part, much of it was. There were even a few pop culture references that I appreciated. But then a few of the Democrat Senators felt the need to throw out some pretty nasty questions and comments. Some moments got pretty intense. With a proven conservative female judge up there and her children in the audience, you would have thought there would be some respect afforded to Judge Barrett.

Senator Graham had made a reference to shattering the barrier. This is Halloween season and to paraphrase my dad, Jay Sekulow, when you shatter the barrier the demons and zombies come crawling out. Sadly, some of the Senators showed that yesterday.

ACLJ Director of Government Affairs Thann Bennett made a really good point about the line of questioning by some of the Senators.

I think it’s also evidence that they don’t have a lot substantive to ask. I think its evidence that they know she’s going to be confirmed. In fact, we had a couple of Senators, specifically Senator Sheldon Whitehouse, today say something along the lines of to Judge Barrett, when you get up to the Court keep this in mind as if it’s almost a foregone conclusion.

But I do think its evidence that they do know its fait accompli, that they know Judge Barrett did a very good job yesterday, and that they know they can’t stop her. Some of the lines of questioning, I’ve got to tell you: Over the line.

Some of the questions were absolutely over the line, like Senator Hirono of Hawaii actually asking the following bizarre and sickening question of Judge Barrett, who is both a mother and a conservative Christian:

Since you became a legal adult, have you ever made unwanted requests for sexual favors or committed any verbal or physical harassment or assault of a sexual nature?

Clearly that was a reference to the previous Supreme Court confirmation hearings but it was completely over the line, based on nothing, and just shows how desperate they can get.

The full broadcast is complete with a lot more conversation about yesterday’s Senate Judiciary confirmation hearing and the questions asked by the Senators, some of which were disgusting. 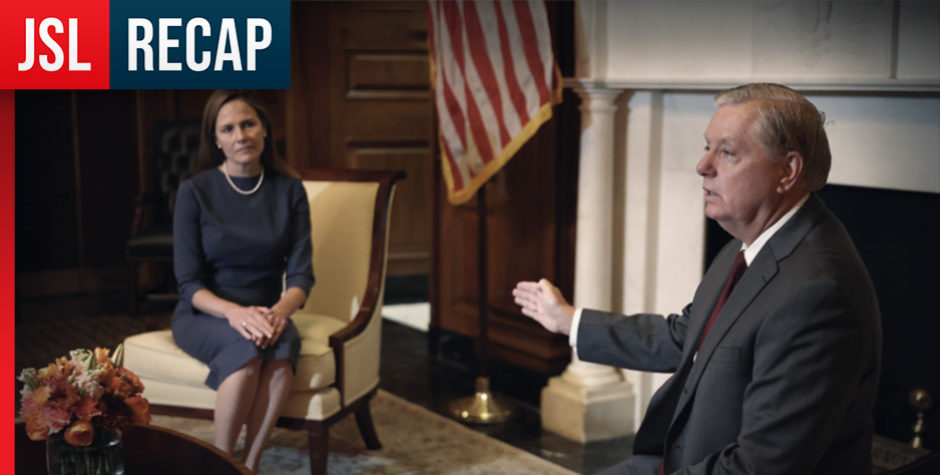