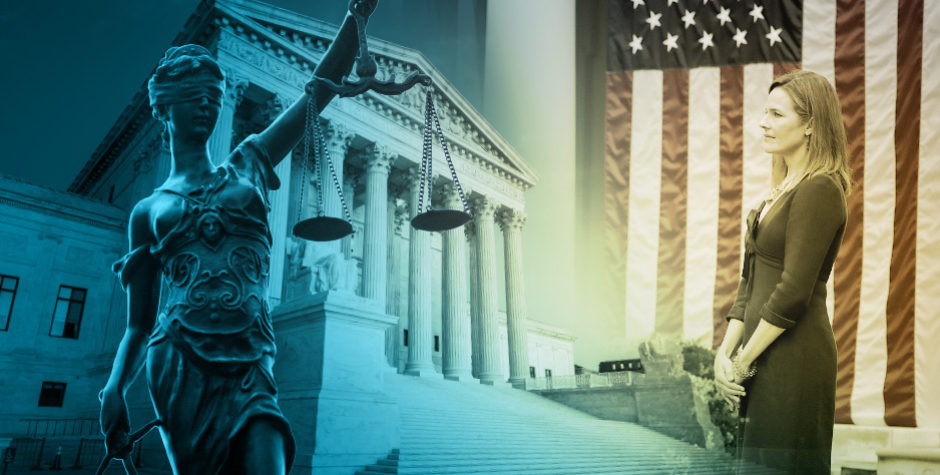 A Judicial Double Standard for Conservatives and Amy Coney Barrett

A Judicial Double Standard for Conservatives and Amy Coney Barrett

Until next January 20th, at least, Donald J. Trump is the President.  There is absolutely no precedent that a sitting President should wait to nominate someone to the Supreme Court, just in case his opponent wins the next election.  A candidate running for President has no power or influence regarding such nominations, nor should this person.

In Article II, Section Two of the U.S. Constitution, the Appointments Clause grants the President the power to appoint judges and public officials subject to the advice and consent of the Senate, which in practice has meant that presidential appointees must be confirmed by a majority vote in the Senate. There is no inference that this power should not be exercised in the final months of a presidential term.  Political considerations aside, a President appoints someone to the Supreme Court whenever a vacancy occurs.  And this is what we are witnessing.  Contrary to claims by the Left, this is not an exercise of raw political power.

No President has ever postponed a nomination to the high Court in order to see who wins the next election.  The Senate has wide latitude as to the matter of advising and consenting.  It was the prerogative of the Senate to not vote on President Obama’s nomination of Merrick Garland.  This latitude is particularly true if the nominating President is in his second term, it is an election year, and he is going to leave office.  But it was well within President Obama’s powers and duties to make the nomination, and he did.

The same is true for President Trump and the nomination of Judge Barrett.  The timing of hearings on Judge Barrett, and the ultimate scheduling of a floor vote, is left entirely up to the majority party in the Senate.  That is as it has always been.  Does anyone think for a moment, in spite of their vociferous objections, that the Democrats would not have voted on Judge Garland if they had been in the majority?  Further, does anyone honestly think that, if the situation were reversed, that the Democrats would postpone the vote on a nominee if it were made by a President in their own party—no matter how close to the next presidential election?

We are witnessing not an exercise of raw power by the Republicans—but rather an exercise in hypocrisy and political expediency by the Left.  They would have more integrity if they at least owned the political motivations for their objections.  If they admitted that their protests over Judge Barrett’s nomination were a normal and expected response by the minority party, then Americans could at least accept the objections for what they are:  the exercise of political free speech and the advice of the Senate minority that the President NOT make the nomination.

On the other hand, the Left’s characterizing the nomination as being illegitimate and an abuse of presidential power is constitutionally unfounded and strains the believability of their objections.  The American people are savvier than that.  They know what is going on and would be inclined to accept the machinations if only the Left were honest about what is going on.  As it is, to fair-minded citizens, this makes the Left’s objections incredible in the true sense of that word:  lacking credibility.  And for the record, with all due respect to the life and legacy of the late Justice Ruth Bader Ginsburg, her reported last request that the appointment be made after the election is immaterial to the matter at hand.  No nomination of a justice’s successor has ever been made based on the wishes of the outgoing, or deceased, justice—nor should it be.  The Left is overplaying its hand.

The Senate minority admit they have no parliamentary tool to stop the confirmation of Judge Barrett.  So, they resort to exaggerated accusations and hyperbolic statements that somehow what is going on is a betrayal of American democracy and fairness.  In fact, it is democracy in action.  Elections do indeed have consequences, as then-President Obama reminded us in 2009.  The people elected Donald Trump as President.  They also sent a majority of Republicans to the United States Senate.  This is our representative democracy at work, based on the supreme law of the land as outlined in the Constitution.

In a Wall Street Journal editorial on September 27th, the editorial board is correct when they opine that the reason the furor and horror of the Left “have become so bitter is because progressives have long viewed the judiciary as a second legislature for policies they can’t pass in Congress.”  Thus, they warn that the Affordable Care Act and abortion “rights,” among other things, are in the balance.  Their objections to a lopsided makeup of the Supreme Court was not an issue when the Court was lopsided in their favor, as it was for decades.  Their criticism of election ramifications and the nomination of Judge Amy Coney Barrett is, in fact, a criticism of the expressed will of a majority of Americans in their election of Donald Trump and for placing Republicans in control of the Senate.

That is a betrayal, in principle, of the rights of voting Americans.  Their threats to upend normal tradition by packing the Court with additional justices, should they regain the presidency, is only further proof of an elitist mentality that, somehow, they know better than the average citizen who votes, and thus insist on having a lopsided Supreme Court of their own design.  It is not about fairness or democracy.  That is about raw political power. President Franklin Roosevelt attempted to change the number of Supreme Court justices for political gain and his actions failed.

As to the Left’s accusations of a rushed process, in fact, Judge Barrett’s pending confirmation is not rushed.  As reported in the Washington Times, one of President John Kennedy’s nominations was announced in late March 1962 and was seated on the high Court two weeks later.  Justice Ginsburg won Senate confirmation on a 96 to 3 vote 42 days after her nomination.  Early in our nation’s history, it took about a week for the Senate to receive a nomination and then vote.  Since 1967 and the Johnson Administration, the average time between nomination and confirmation is 68 days.  There is unquestioned precedent for a President nominating a Supreme Court justice at any time in his presidency and for the Senate to act relatively quickly.  A looming presidential election does not supersede the U.S. Constitution or the prerogative of either a President or the U.S. Senate.

Whether or not Judge Amy Coney Barrett’s judicial philosophy aligns with one’s own, there is no doubt that she is extremely qualified.  She graduated first in her class in law school.  She has served as an appellate judge for three years and was a professor at the law school of Notre Dame.  Her opinions are a matter of public record. She is known to be fair-minded and has received the support of her colleagues on the court where she serves, as well as all the clerks who served with her when she clerked for the late Justice Antonin Scalia at the Supreme Court—Democrats and Republicans alike.  Even those colleagues who differ with her as to her stance as a constitutionalist (or originalist) have no doubt about her qualifications.  She will be an exemplary justice and an inspiration as a scholar, mother, and wife, and one who embraces the American principle of equal justice under the law.