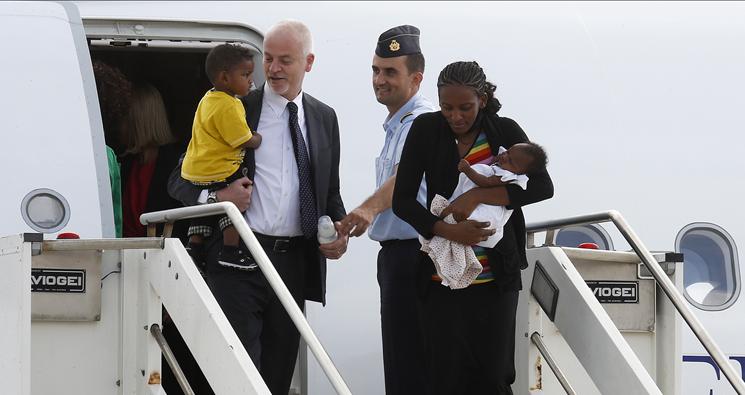 Victory! Meriam Ibrahim and her American Family Safe, Free, and in Italy

Meriam Ibrahim and her American family are now safe and free in Italy.

After being under U.S. protection in the American Embassy in Khartoum for the last month, Meriam her two young American children Martin and Maya, and her American husband Daniel were flown out of Sudan on an Italian government plane, escorted by Italian personnel.

This is a huge victory for religious liberty.  Meriam, Martin, and Maya have gone from suffering on death row in a brutal prison because of Meriam’s Christian faith to freedom in Italy.

It is believed that Meriam and her American family will be traveling to the U.S. in a matter of days, but today they are safe and free in Italy.

We are thankful for the Italian government’s critical involvement in this case.

Fox News has more of her harrowing exit from Sudan:

Meriam Ibrahim, the Sudanese Christian woman who faced a death sentence for refusing to renounce her faith, has been flown to Italy on an Italian government jet, accompanied by that country's vice-minister for foreign affairs.

Reuters reported that Italian television broadcast images of Ibrahim, 27, arriving at Rome's Ciampino airport accompanied by her family and Italian politician Lapo Pistelli. Earlier, Pistelli had posted a picture on his Facebook page depicting himself with Ibrahim and her two children. The caption, translated from Italian, read "With Meriam, Maya, Martin and [Ibrahim's husband] Daniel, a few minutes from Rome. Mission accomplished."

Italian Prime Minister Matteo Renzi was among those who greeted the plane, calling it "a day of celebration."

Here is the first picture of Meriam’s freedom from aboard the plane:

We are thankful that Meriam, Martin, Maya, and Daniel are now safe and free.  Their faith in the face of death and persecution is an inspiration to us all.

We are also thankful for the hundreds of thousands who signed the petition for her freedom at BeHeardProject.com.

Today Meraim, 20-month-old Martin, newborn baby Maya, and their American husband and father Daniel are now safe and free because you were heard.