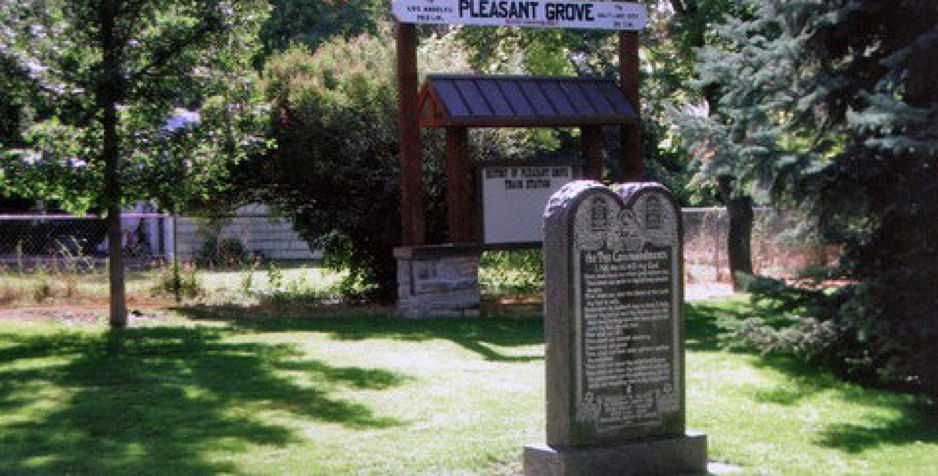 The Utah Supreme Court has upheld a trial court’s ruling in favor of our client, Pleasant Grove City, Utah, in a state-court lawsuit filed by Summum, a religion established in Salt Lake City in 1975 that, according to its tenets, was founded on teachings that predate the ancient Egyptians and are summarized in the Seven Aphorisms.

Each item displayed in Pioneer Park has some connection to the settlement, history, people, or cultural life of Pleasant Grove, which was founded by Mormon pioneers in 1850, or was donated by individuals or groups with a historical connection or strong ties to the community. The City declined to install the Summum monument because Summum and its Seven Aphorisms, by Summum’s own admission, have no historical relevance to Pleasant Grove or its founding.

In contrast, the Ten Commandments monument is displayed in Pioneer Park because of its historical relevance to the community and also the significant contributions to the community of its donor. The United States Supreme Court has recognized that the Ten Commandments have an undeniable historical meaning in light of the role they have played in America’s heritage. This is especially true in Pleasant Grove, as the Ten Commandments were a set of governing principles for the nineteenth-century Mormon pioneers who endeavored to create an orderly society in Utah and in Pleasant Grove. The Ten Commandments monument was donated to Pleasant Grove in 1971 by the Fraternal Order of Eagles and was placed by the City in Pioneer Park in appreciation of its donor and because of its historical relevance. As then-Mayor Jack Cook explained at the time, the monument “would serve to remind citizens of their pioneer heritage in the founding of the state.”

As described in greater detail here and here, Summum first filed its lawsuit against Pleasant Grove, about ten years ago in federal court, arguing that because the City displays a Ten Commandments monument in Pioneer Park, the City must also display Summum’s Seven Aphorisms monument in that same park.

Summum then turned to the Utah state courts, advancing a claim under the Utah Constitution that Pleasant Grove’s denial of its request to accept and display Summum’s Seven Aphorisms monument in Pioneer Park violated the state’s establishment clause.

In June 2012, Utah state court judge Fred D. Howard ruled against Summum and in favor of the City. In response to Summum’s argument that because the City displays the Ten Commandments in Pioneer Park, Summum must be allowed to display its own monument in the same park, Judge Howard explained that “[t]his is not a situation in which the City has opened up the Park for private entities to erect monuments in expression of their private speech” and, thus, “[t]he benefit described by [Summum] . . . of one group being allowed to erect a monument while another group is denied the same privilege, simply does not exist.”

Summum appealed Judge Howard’s decision, which the Utah Supreme Court agreed to hear. After extensive briefing, the case was argued on March 4, 2014, (about five years after the United States Supreme Court handed down its unanimous ruling against Summum’s federal free speech clause claim).

During oral argument, the Justices of the Utah Supreme Court were engaged and asked searching and detailed questions. As with the oral argument at the United States Supreme Court (you can listen to the audio of that here), the Utah Justices were concerned by the claim that a private party could have a constitutional right to erect a permanent monument in a public park when only the government displays monuments in that park.

If such a right did exist, as Summum claimed, any group or individual would be able to force Pleasant Grove to accept ownership of any item of its choosing, and also force the City to permanently display that item in Pioneer Park. Similarly, a host of public properties across Utah, where government displays monuments and the like, would become dumping grounds for an array of monuments, memorials, paintings, sculptures, and other items that private individuals or groups want government to accept and display.

As noted, federal courts have rejected Summum’s request to force Pleasant Grove to install its Seven Aphorisms monument in Pioneer Park and now, too, so has the Utah Supreme Court.