The Power of the Word of God: Defending Religious Liberty in the Armed Forces | American Center for Law and Justice
Search  |  Logout  |  Login  |  Register 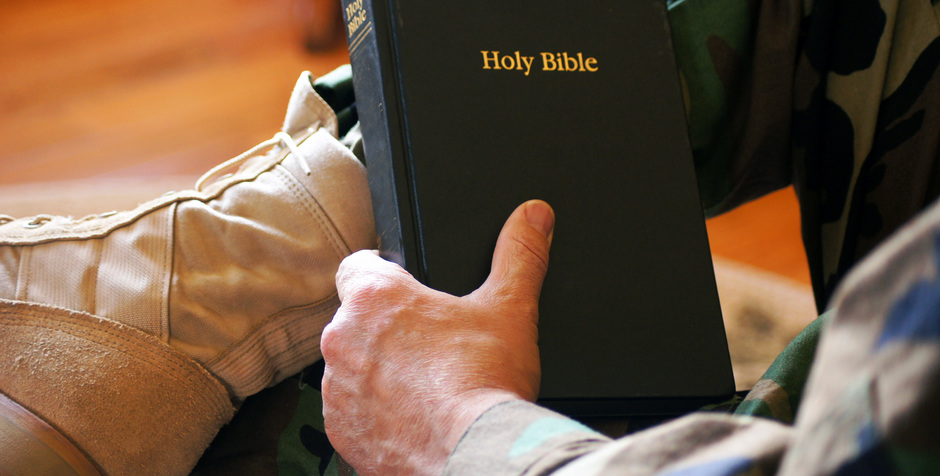 The Power of the Word of God: Defending Religious Liberty in the Armed Forces

Have you heard what Mikey Weinstein and his Military Religious Freedom Foundation (MRFF) are up to now?!? They have discovered that an Air Force major stationed at a base in Colorado keeps an open copy of the Bible on his desk at work. Sounds pretty benign, right? Not so according to Mr. Weinstein and company at the MRFF. Apparently it wasn’t just a nondescript, run-of-the-mill “Bible” that the major put on his desk, but it was, to use Mr. Weinstein’s own words, “a highlighted Christian Bible.” Not only that, according to Mr. Weinstein, the mere presence of the major’s “highlighted Christian Bible” constituted “Christian religious oppression.” I’m not making this up, folks.

So, what did Mr. Weinstein do? He called the major’s commanding officer and demanded that the commander initiate an internal investigation of the major’s “truly abhorrent example of First Amendment civil rights violations,” of his “open, notorious, and hostile violation” of the required separation of church and state as Mr. Weinstein interprets it, of his “brazen display of sectarian Christian triumphalism and exceptionalism,” as well as his “outrageous display of callous and bold Christian primacy.” One wonders if Mr. Weinstein has ever read the First Amendment in its entirety, with its lofty phrases about Free Exercise of Religion and Freedom of Speech. He seems fixated on the Establishment Clause, as if that clause eclipses those that follow it.

But, you know what? Nowhere in his denunciation of the major and his Bible, did Mr. Weinstein even allege that the major spoke about the Bible with his colleagues or subordinates, spoke about his religious beliefs with anyone, or took any other action that would indicate that he was trying to force his beliefs on anyone in his office. His action was the private act of a private individual, fully protected by the Free Exercise and Free Speech clauses of the First Amendment. Placing his Bible on his personal workspace was fully in accord with the Constitution of the United States AND military regulations.

Like a petulant child who did not get his way, Mr. Weinstein spouted off that the investigation was tainted. Just to show he was serious, Mr. Weinstein sent a letter to the Department of Defense (DOD) Inspector General (IG) demanding that he investigate the Bible as well. Whether the DOD IG will investigate or not, we don’t know.

But the ACLJ has responded as well. We, too, have sent a letter to the DOD IG. In our letter, we lay out what the law is and what the law requires. We also remind him of who Mr. Weinstein is and what his agenda is. We strongly urge the DOD IG not to allow himself or his office to become tools for Mr. Weinstein’s crusade to eviscerate religious liberty in the U.S. Armed Forces. We must stand up for religious liberty in the Armed Forces or it will be gone before we know it.

In light of the foregoing, we urge you once again to disregard Mr. Weinstein’s numerous specious calls to investigate alleged Constitutional and case law violations, including his most recent call to investigate the presence of a Bible on an officer’s private workspace. Other than espousing general offense at the mere presence of a religious book on an officer’s individual desk, Mr. Weinstein has alleged no legally cognizable injury. Accordingly, Mr. Weinstein’s allegations are baseless, and they must be treated as such by you.

Should DOD desire ACLJ assistance in dealing with such a matter or in drafting or reviewing guidelines for subordinate commanders faced with similar or future MRFF demands, we stand ready to assist you.

You know, on second thought, Mr. Weinstein is wise to fear the Bible: “For the word of God is living, and active, and sharper than any two-edged sword, and piercing even to the dividing of soul and spirit, of both joints and marrow, and quick to discern the thoughts and intents of the heart.” Hebrews 4:11 NASB.

That’s why we continue to defend religious liberty and other constitutional freedoms for our servicemen and women who sacrifice so much for our freedom and security. We must not let angry atheists warp and twist the true meaning of the U.S. Constitution and our first freedoms.