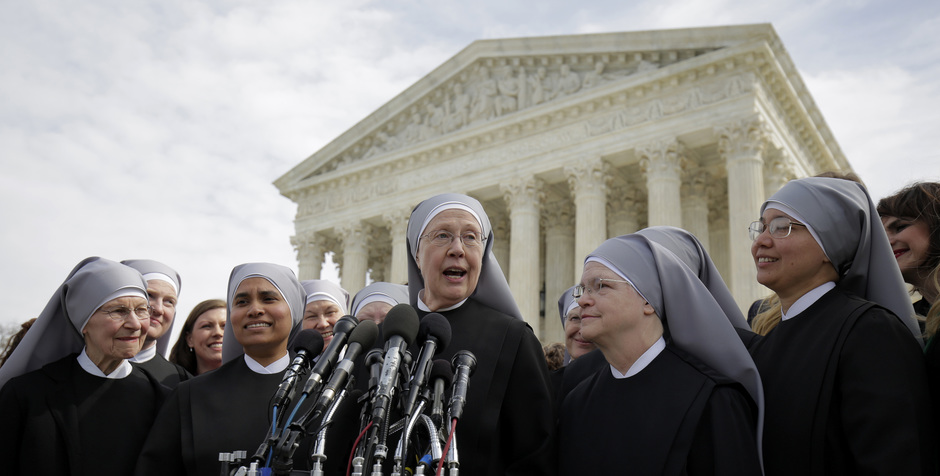 In the most closely watched religious liberty case of its current term, the U.S. Supreme Court today dropped a major hint that it might not be content to let the passing of Justice Antonin Scalia result in a 4 – 4 deadlock that would force the Little Sisters of the Poor and other religious entities to choose between violating their consciences and closing up shop. In an extraordinary Order issued today, the Court directs the parties to file supplemental briefs that specifically address how the contraceptive and abortifacient coverage mandated by the Obama Administration might still be obtained by religious objectors’ employees in a way that would not involve the objectors in any way in the process – including submitting the form that is required under the current HHS Mandate and is at the center of the current controversy.

Not only does the Court direct the parties to submit supplemental briefs no later than April 12th, the Court provides a detailed example of a procedure in which the Little Sisters’ moral dilemma would be addressed in a way that (the Court suggests) might be morally acceptable to the Sisters while, at the same time, achieving the government’s stated goal of removing barriers to contraceptive access. The Order does not present the parties with a “take it or leave it” example; instead, the Court invites the parties to come up with “other proposals along similar lines.”

This is an extraordinary and hopeful development. While most observers of last Wednesday’s oral argument on the case walked away believing that the Court was split 4-4 – a result that would have meant a loss for the Little Sisters and others who lost at the courts of appeal – today’s development appears to indicate that the Court is, instead, struggling to fashion a resolution of the case that both sides can live with. Perhaps, in hindsight, there were hints of unease among even some of the liberal members of the Court last week when they were visibly surprised by what appeared to be the government’s acknowledgment that the HHS Mandate did, in fact, impose a “substantial burden” on religious liberty. Such an acknowledgment (later denied, somewhat weakly, by the government’s lawyer) would trigger an obligation by the government to pursue its objectives by means that would be the “least restrictive” upon the Sisters’ religious liberty. What today’s Order suggests, if nothing else, is that there may be a majority of the Court that, in pondering the implications of this case, is grappling with the realization that there are, in fact, less restrictive means available to the government, one of which is outlined in today’s Order itself.

All in all, we are pleased to see that the Court is viewing the religious liberty claims at stake here with the utmost seriousness and is taking this extraordinary step of directing the parties to help it craft a resolution that will truly respect and preserve our First Freedom.