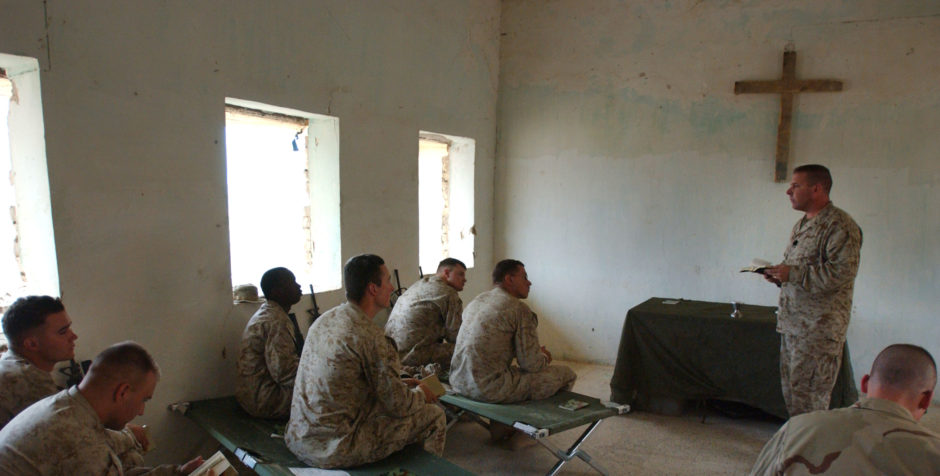 So you thought you heard it all from the angry atheist, anti-Christian extremists led by Mikey Weinstein and the absurdly named Military Religious Freedom Foundation (MRFF) – think again. This time they are ludicrously claiming that a leadership conference that includes executives from Facebook and Google, along with religious leaders of numerous denominations, somehow violates the Establishment Clause in the military. This inane accusation is totally disrespectful and dishonoring to those who serve our nation. We’re directly engaging to legally defend the religious liberty of those who defend our freedoms from these outlandish attacks.

This week at Wright-Patterson Air Force Base in Ohio, individual Airmen and civilian employees have been offered the opportunity to participate in a Leadership Conference. The conference is being organized and run by the Willow Creek Association, a faith-based group “committed to the singular idea that inspired, encouraged and equipped Christian leaders [to] transform their communities.” The conference is being supported by the Base Chaplains Office, which sent out an email informing the base community of the conference and inviting those who might be interested in participating. Note: No person is being pressured to participate—each individual is free to decide for him or herself whether to avail him or herself of the opportunity.

Ever on the prowl to ferret out potential religious wrongdoing by what he describes in this instance as “mercantile oriented, fundamentalist evangelical Christian[s],” Mr. Michael L. “Mikey” Weinstein of the Military Religious Freedom Foundation didn’t hesitate to sound the alarm and allege serious wrongdoing worthy of severe punishment. He rushed a demand letter to the Commanding Officer of the 88th Air Base Wing at Wright-Patterson AFB, alleging numerous violations of Air Force regulations and demanding that the Commander “immediately investigate this matter,” that he “take timely, appropriate corrective action,” and that he “punish[] . . . those who have allowed these dangerous violations of Air Force regulations to ensue.”

So, what were the “dangerous violations” that Mr. Weinstein had identified?

First, he complains that the “invitation does not specify a targeted religious audience, stating instead that, ‘[t]he event . . . is for everyone interested in growing their leadership skills’” (emphasis added). According to Mr. Weinstein, the mere sending of an invitation to all potentially interested persons somehow violates Air Force regulations.

As we point out in our letter to the Air Force commander, that is utter nonsense. Mr. Weinstein has apparently decided that he has authority to determine to whom such an invitation may be sent and to whom it must be denied. One wonders who made him king and ruler of all. Yet, according to the conference website, the Global Leadership Summit has worked with groups representing more than 90 denominations. So much for Mr. Weinstein’s claim that the conference will reflect what he calls “this narrow religious viewpoint.” Ninety denominations, instead, suggest a pretty broad outreach.

Second, Mr. Weinstein also claims that, if the Commanding Officer does not do what is demanded of him, he will be showing “favoritism of one faith over another or no faith,” which in turn will “eviscerate[] good order, morale, discipline, unit cohesion, health and safety and military readiness of those military and civilian members” he commands. Such claims are simply unbelievable!

According to Mr. Weinstein, one short email inviting Airmen and civilian employees to a leadership conference at which Biblical principles of leadership may be shared will utterly destroy the entire command. Weinstein essentially claims that:

What is actually gone here is any semblance of reason and logic in this matter on the part of Weinstein and MRFF.

Unlike Mr. Weinstein, we have considerably higher confidence in the resilience of the Airmen and civilian workforce at Wright-Patterson AFB. Yet, even if Mr. Weinstein is right, that all those bad things will happen if the Commanding Officer does not take the drastic action that Mr. Weinstein demands, then the real problem would be with the quality, maturity, and training of the persons at Wright-Patterson AFB, not simply with the content of an email sent from the Chaplains Office.

Free exercise may not be legitimately limited to what some government official or civilian advocacy group (like the MRFF) or civilian attorney (like Mr. Weinstein) may think it should mean—or is willing to tolerate. After all, as the Supreme Court aptly noted, “religious beliefs need not be acceptable, logical, consistent, or comprehensible to others in order to merit First Amendment protection.”

Although the Armed Services clearly have different rules than civilian society, the ACLJ is committed to protect the rights of the men and women in uniform to the maximum extent possible, consistent with the unique nature of military service. We will oppose all who seek to restrict the rights of those protecting our Nation in uniform beyond what the needs of good order and discipline require. We invite you to stand with us in protecting the rights of those who are willing to lay down their lives to protect us.