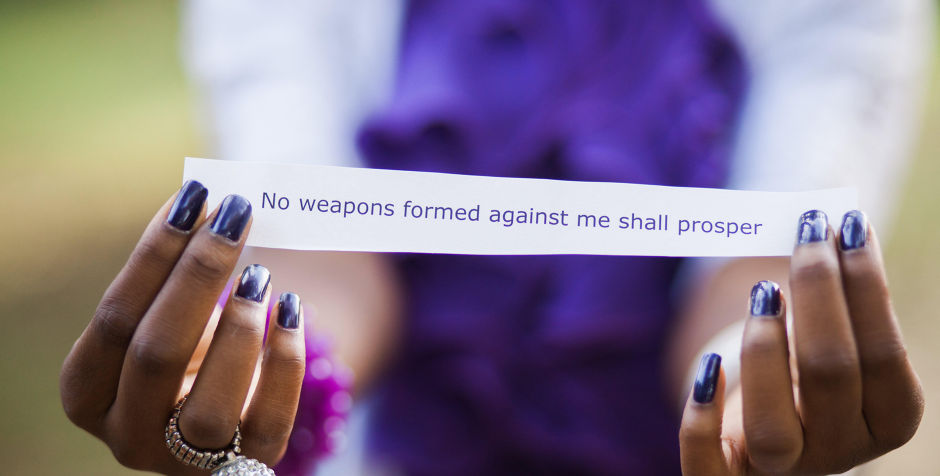 Sterling, a devout Christian, had posted a Scripture verse, Isaiah 54:17 (“no weapon formed against you shall prosper”), in three places around her work station. Though the verses were small and Sterling shared her work station with no others at the time, Sterling’s superior officer in the Marines ordered her to remove them, referring to the verses in profane language.

In a shocking decision, the United States Navy-Marine Corps Court of Criminal Appeals had ruled that Sterling’s posting of Scripture verses in her workspace was not an exercise of religion. The highest military court agreed to hear the case, after we filed an amicus brief on behalf of key Members of Congress and over 175,000 concerned Americans who joined our committee to support Religious Freedom in the Military.

Once the court agreed to hear the case, we filed another amicus brief, this time on the merits of the case, urging the court to reverse the lower court’s outrageous holding that the Religious Freedom Restoration Act (RFRA) did not apply to Ms. Sterling’s case.

At the oral argument last week, according to one Fox News report, Judge Kevin Ohlson seemed to agree that Ms. Sterling had demonstrated a substantial burden on her religious freedom. Other judges also questioned whether the Marines had respected Ms. Sterling’s religious freedom rights.

Another report from Stars and Stripes recounted that other judges on the court appeared skeptical about whether RFRA should be applied. One judge stated, “The military is supposed to be neutral in matters of religion” and questioned “whether this was a case of religious freedom protections shielding a practitioner or an act of insubordination shielded under the guise of religion.”

“Does throwing a cloak of religion on it excuse her from thumbing her nose at her supervisor?” he asked.

Ms. Sterling’s counsel, Paul Clement, former Solicitor General in President George W. Bush’s Administration, responded that the military court must properly interpret RFRA and even though Ms. Sterling did not initially ask for a religious accommodation, the lower court wrongly determined that RFRA did not apply. He argued that the Marines’ treatment of Ms. Sterling was tantamount to criminalizing her religious exercise, which RFRA clearly forbids.

The court is expected to issue a ruling in the next several months.

Our brief with the court emphasized Congress’s heightened commitment to religious liberty, not only through RFRA but also in recent amendments to the National Defense Authorization Acts. We argued that the Marines’ treatment of Lance Corporal Sterling flouted Congress’s clear intention to protect the religious liberty rights of our nation’s service members. As Congressman Doug Lamborn, one of the Congressmen who joined our brief, said in a letter to the Air Force Academy after a similar incident involving the forced removal of scripture verses from a cadet’s living area: “The brave men and women serving to protect the Constitutional rights of all Americans should not have their own Constitutional rights stifled as they carry out that task.”

As we said before:

Our men and women in uniform put their lives on the line every day to defend us, our Constitution, and our way of life. Yet, their own constitutional freedoms are under attack.

Our Armed Forces selflessly protect our religious liberty from enemies abroad.  The least we can do is protect theirs.  Whether it’s defending service members being punished for posting Scripture, or efforts to ban Bibles from Veterans Displays, the ACLJ will continue to stand for the religious freedom of those who valiantly defend ours.

The ACLJ recognizes that men and women in uniform, due to the unique nature of military society and its requirements, do live with significant limitations on the rights enjoyed by the rest of us. As such, we at the ACLJ believe that we must stand up for the members of the Armed Forces so that they can enjoy to the greatest extent possible every right guaranteed to them under the Constitution and laws of the United States.

Stand up. Be heard. Your voice matters.

Thank you for standing with us.