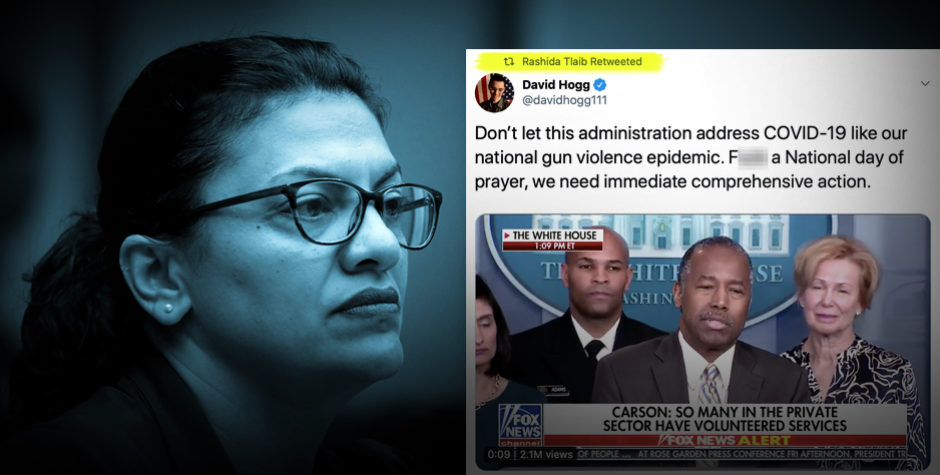 Representative Rashida Tlaib unleashed a profanity-laced attack on the National Day of Prayer.

The President rightly declared a National Day of Prayer yesterday in the face of the Coronavirus (COVID-19) pandemic.

Yet Rep. Tlaib – who just promoted erasing Israel from the map and replacing it with “Palestine” – shockingly responded to a national call to prayer over the Coronavirus by retweeting “[Expletive] a National Day of Prayer.”

This isn’t just insensitive, it’s a shocking perversion damaging the very credibility of our government institutions in a time of national crisis.

At the ACLJ, we’re not just encouraging prayer, we’re defending prayer and religious liberty in courts nationwide. We just filed our critical brief at the International Criminal Court today to defend Israel’s interests against attacks supported by Rep. Tlaib. Our work does NOT stop.

But we need you to take action with us. The power of prayer is critical in this time of need. It is beyond irresponsible for public servants to attack prayer.

Let Rep. Tlaib know we won’t stand for it. She should be censured.

Petition to Condemn Rep. Tlaib and Her Public Attack on Prayer

As we fight back against crude attacks on prayer and religious liberty, we urgently need your support. Have your gift DOUBLED today.