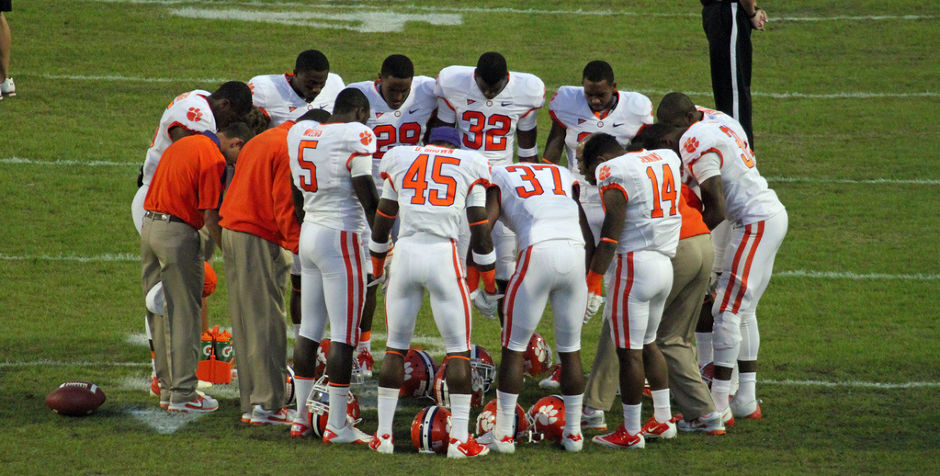 The radical atheists at the Freedom from Religion Foundation (FFRF) are at it again.

This time, they are using their scare tactics and false arguments about the U.S. Constitution to challenge some of the most successful college football programs in the nation days before the new college football season begins.

The Freedom from Religion Foundation holds themselves out as protectors of “the constitutional principle of separation between state and church [and] represent[ing] the views of freethinkers (atheists, agnostics, and nonbelievers.)”

But as we’ve discovered at the ACLJ as we continue to successfully combat the unconstitutional attacks from the Freedom from Religion Foundation, these atheists are anything but freethinkers. They do not support freethinking. Instead, they attack things they don’t like, such as chaplains for football teams where adults voluntarily agree to participate in faith-based events and meetings.

The outrageous claims from FFRF’s report are too many to list in just one article, but here is an assortment:

For those of you keeping score at home, FFRF is calling football team chaplains “religious discrimination" and players and coaches praying together an "unholy alliance". The ACLJ has successfully defeated FFRF claims like these before because the Constitution does not mean what the FFRF thinks it means.

What does FFRF’s so-called “model policy” recommend? Hiring a counselor who can provide secular advice and life guidance. Just as they’ve done before, the FFRF attacks traditional faiths and wants to replace them with their radical, leftist, secular orthodoxy.

The FFRF is threatening lawsuits against some of these football programs. But the FFRF only wins when they scare schools and public institutions with these letters. Whenever they go to court – whether it’s to attack the Pledge of Allegiance in schools or In God We Trust on our money – they lose.  Some federal judges agree with them from time to time, but eventually their arguments are found to be unconstitutional.

In their letter to Auburn, the Freedom from Religion Foundation argues that “it makes no difference if the chaplain is unofficial, not school-sponsored, or a volunteer.” But that’s simply not what the law and the Constitution say.

Many of these top college football programs are also fighting back against FFRF’s lies. The Washington Post has details:

The FFRF report claimed that Williams “has an office in [Auburn’s Jordan-Hare] stadium,” but according to AL.com, that office is actually in the athletics department’s student development center. Auburn released this statement Thursday:

“Chaplains are common in many public institutions, including the US Congress. The football team chaplain isn’t an Auburn employee, and participation in activities he leads are voluntary.”

Here at the ACLJ, we are fighting back. We are preparing comprehensive legal letters to let each of these college football programs know what their Constitutional rights are. We are fighting the angry atheist attacks on every front. We are standing up for the Constitution and for the religious rights of football players from coast to coast as the new season begins.