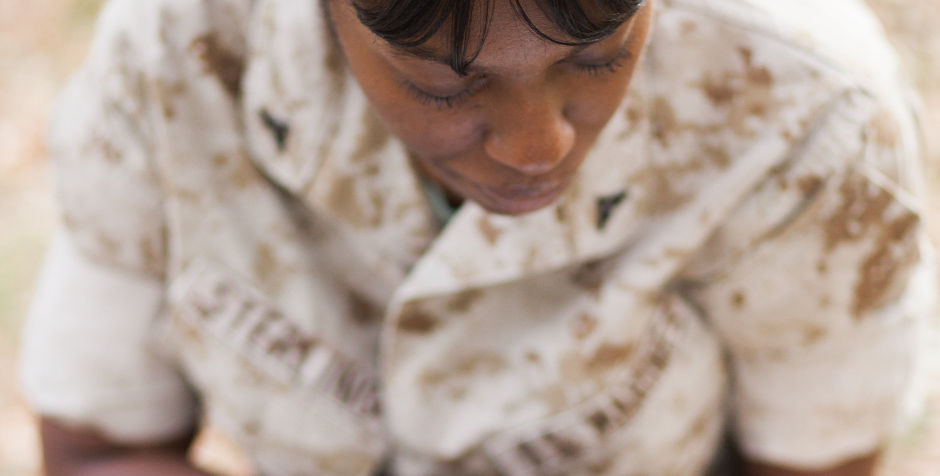 Religious liberty continues to come under attack in our Armed Services. One woman in the Marines was told that posting Bible verses in her personal work station was not an exercise of religion.

We are fighting back.

Today, the American Center for Law and Justice (ACLJ) asked the United States Court of Appeals for the Armed Forces to grant review in a major religious liberty case, United States v. Sterling.  In Lance Corporal Monifa Sterling’s case, the United States Navy-Marine Corps Court of Criminal Appeals held that the Marines could order  Sterling to remove a Bible verse that she  had posted in her work station.  Sterling, a devout Christian, posted Isaiah 54:17 (“no weapon formed against you shall prosper”) in three places around her work station.

Our amicus brief, filed on behalf of 42 Members of Congress, urges the court to recognize the importance of this case and to grant review to reverse the lower court’s outrageous holding that the Religious Freedom Restoration Act (RFRA) did not apply to  Sterling’s case.  Our brief argues that Congress intended RFRA to apply to the United States Military and that Sterling’s posting of scripture verses at her work station was certainly an exercise of Sterling’s religion sufficient to trigger RFRA’s protection.

Although the lower court had acknowledged that RFRA extended broad protection to religious liberty, the court adopted a very narrow definition of the statutory term “exercise of religion” and arrived at the startling conclusion that  Sterling was not exercising her religion by displaying a Bible verse.

Our brief argues that the lower court’s decision sets military tribunals up as theological experts evaluating the validity of religious beliefs, and clearly violates the First Amendment principle that no court is competent to dissect religious beliefs, or to pass judgment on whether those beliefs are part of a religious belief system.

Additionally, more than 142,000 concerned Americans who want to protect religious liberty in the U.S. military signed onto our brief.

It is critical that the United States Court of Appeals for the Armed Forces grant review to reverse this dangerous precedent that threatens the religious liberty of all our nation’s Service members.

It is also vital that the American people continue to stand up and defend the faith of the brave men and women of our Armed Forces.  Recently, the ACLJ, on behalf of over 100,000 Americans, helped successfully resolve a situation where a Christian General was being threatened with a court martial for expressing his faith.  After receiving our demand letter in that situation, the Air Force agreed with us and assured us that this General’s religious freedom would be protected.

As we continue to defend faith in the military, continue to take action with us to defend the religious liberty of those who defend our precious freedoms.