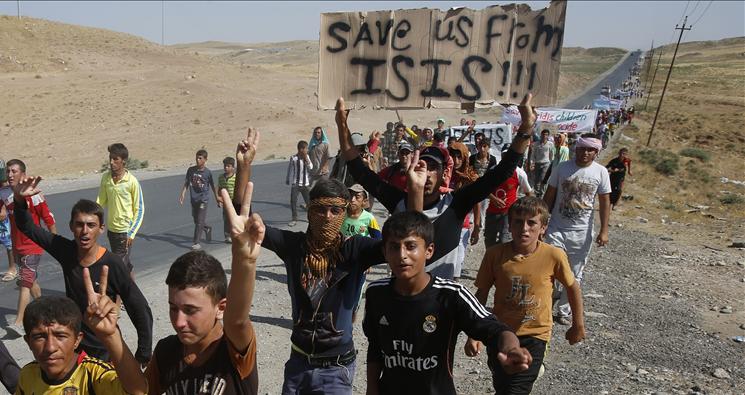 Iraq’s Christians are Crying Out for Help, Facing Jihadist Genocide

Iraq’s Christians are Crying for Help

ISIS militants are engaged in a calculated extermination of Christians in Iraq.

The reports coming out of Iraq are horrendous.  Christian homes have been marked with the sign of the Nazarene for slaughter.  Children are beheaded and even crucified.  Christian women are being sold as sex slaves.

This jihadist army has unleashed unthinkable atrocities on Christians in the region.  It is believed that over 400,000 Christians have been displaced from their homes.  ISIS militants gave them an ultimatum: leave or face “death by the sword.”

They are fleeing in droves, but it is not stopping the onslaught of ISIS.

Iraq’s Christians are crying out in desperation for aid from the West, from America.

A spokesman for Iraq’s Christians, Mark Arabo, says ISIS is engaged in “a full-blown genocide.”

Well, ISIS did a convert or die campaign. They eradicated all Christians from their villages. The reason why it’s a genocide? Two reasons: Targeted displacements and targeted killings. They've taken away their passports, they massacred men. They’ve raped women. They’re displaced from their homes. They actually mark their homes with ISIS red death stamp of N, which stands for Nazarene and they're systematically trying to wipe off the oldest Christians in the world. . . .

I think the whole world should join us hand by hand, shoulder by shoulder for humanity. This – these are crimes against humanity. Let's work together with the United Nations to offer asylum, offer a home for these people. . . .

Right now, we should do everything we can to save their lives, whether it be air lifting them, whether it be establishing a safe zone. Currently, there is no safe haven for Christians and they're massacring them one by one. We're getting hundreds of phone calls from Americans that have family in Iraq that are telling us the most horrendous stories and we have to act. As a world community, for humanity, we must act.

He reiterated that Iraqi Christians are begging the Obama Administration, the United Nations, anyone who will listen, to come to their aid.

President Obama acted, slowly, in response to a religious minority trapped on top of a mountain, but what about the Christians facing mass genocide?  We can be doing more.  We must do more.

The international Christian ministry Open Doors has called it the “worst genocide since Rwanda.”  Pope Francis has called for international action saying, “Our brothers are being persecuted, chased away,” and urged the world’s nations to “adopt measures to protect those who are threatened by violence and assure them necessary aid.”  He went even further, saying there are “more martyrs in the Church today than there were in the first centuries.”

That is the stark reality that Christians in Iraq face today.

At the ACLJ, were working with Members of Congress to provide aid to Christians and arms to the people of Kurdistan who are willing and able to defend these Christians from ISIS terror.  The Obama Administration must not stand by as Christians are slaughtered, massacred, by the evil that is ISIS.

Already over 150,000 Americans have taken action by signing our petition to end the genocide of Christians.  Sign today, and #BeHeard.