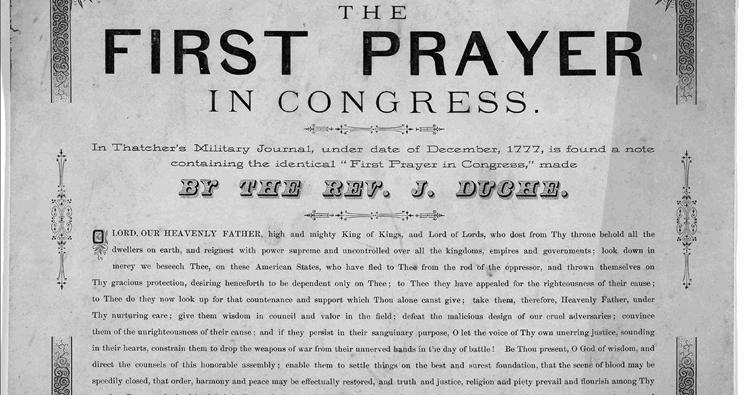 The atheist group Freedom From Religion Foundation (FFRF) is at it again, attacking prayer at public meetings.

This time the target of their attack was my hometown. For more than a quarter century Henrico County, Virginia had opened its Board of Supervisors meetings with an invocation, much like many other county boards and city councils around the country.

After the June 12th meeting, which opened with an invocation by a local Baptist pastor, someone complained.

The complaints came from two sources, neither of whom should have any standing to control the Henrico County Board of Supervisors. One complaint came from, “a user of county services but not a resident,” which could mean anything (like driving on county roads or visiting a county park), in other words not a taxpaying resident of the county. The other was a letter sent by the Wisconsin-based FFRF.

The complaints focused on the fact that the invocation at the June 12th meeting included the phrase, “In Christ’s name we pray.”

It is a disappointing but not uncommon story. FFRF is engaged in a concerted effort to target school boards, city councils, and other local government bodies to eradicate every vestige of our religious heritage as a nation. In today’s lagging economy, FFRF knows that these local cities and towns across America don’t have the funds to defend lengthy and costly litigation, and a strongly worded demand letter, no matter how erroneous, can often cause a small municipal body to cave.

The fact is FFRF consistently loses their challenges to public prayer when they take those cases to court.

Public prayer does not cause a constitutional crisis and those who disagree with prayer should not be able to silence our leaders from opening a public meeting in prayer.

In fact, the Supreme Court, in Marsh v. Chambers, specifically found that public prayer at the opening of “deliberative public bodies” was constitutional.

In Marsh, the Court held:

The opening of sessions of legislative and other deliberative public bodies with prayer is deeply embedded in the history and tradition of this country. From colonial times through the founding of the Republic and ever since, the practice of legislative prayer has coexisted with the principles of disestablishment and religious freedom. In the very courtrooms in which the United States District Judge and later three Circuit Judges heard and decided this case, the proceedings opened with an announcement that concluded, "God save the United States and this Honorable Court." The same invocation occurs at all sessions of this Court.

There is no question that opening the meetings of a “deliberative public bod[y]” – i.e. city council, school board, board of supervisors, etc. – can done in a constitutionally permissible manner.

It is time to stand up to these bully tactics and refuse to allow outside angry atheist groups’ personal distaste for prayer to dictate local public policy.

7.12.2012 Update: Co-found and co-president Annie Laurie Gaylor of the FFRF said they told Henrico County, “There's no need to pray, it's divisive, embarrassing.” The atheist group’s demand that the county cease opening its meetings in prayer relied on a recent appeals court decision striking down overt, continual sectarian prayers at board meetings. Yet, the appeals court also clearly stated, "This is not to say that the Board must abandon the practice of legislative prayer." Unfortunately, on FFRF’s advice, that is exactly what Henrico chose to do.