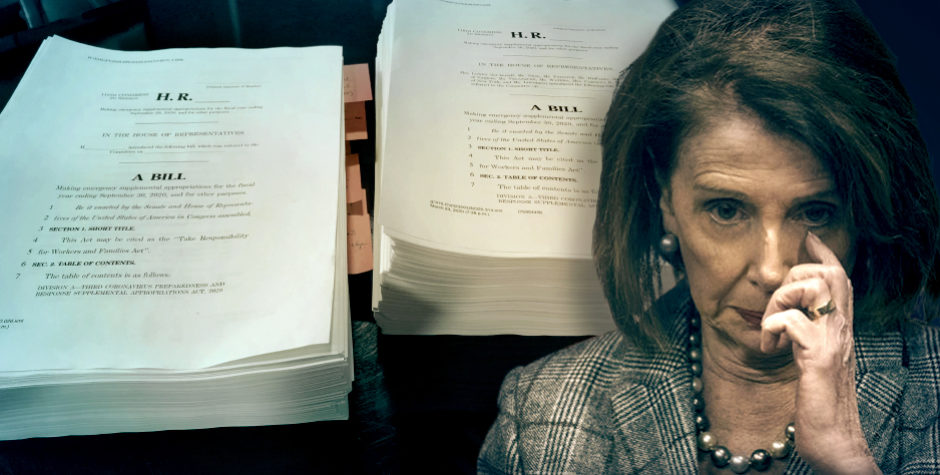 American families are suffering and scared due to Coronavirus (COVID-19) protocols that are forcing businesses to shut down during the crisis. Meanwhile, Speaker of the House Nancy Pelosi is holding the trillion-dollar relief package hostage.

Speaker Pelosi and her Democrat colleagues held a weekend call with more than 200 members planning out their strategy for “Phase 3” of their stimulus plan.

According to a source on the call, House Majority Whip James Clyburn (SC-6) told lawmakers: “This is a tremendous opportunity to restructure things to fit our vision.”

Speaker Pelosi then released an 1,100-page bill late Sunday night, which our legal and governmental affairs team has been reviewing around the clock. On Monday evening, Speaker Pelosi replaced that bill with yet another new bill—this one 1,400 pages long.

Democrats are following through on their threat to go rogue with their own stimulus plan, unveiling a more than 1,400-page bill Monday night, packed with policy differences compared to the proposal Senate Republicans laid out.

All this while a separate Senate bill, which had been negotiated with the participation of both Republicans and Democrats (according to Sen. Tom Cotton) – was then repeatedly blocked by Senate Democrats.

The Left is playing games with the nation while people are struggling, and they doing everything they can to politicize and push their agenda into an emergency Coronavirus bill that’s meant to save lives and stop the damage.

But if the House charts its own course on a competing piece of legislation, it could take even longer to arrive at a bipartisan consensus that can pass both chambers and get signed into law.

We do not have longer. The emergency is NOW.

As stated by Sen. Ben Sasse (NE) when he addressed the Senate:

Instead of taking that legislation — urgent, necessary legislation — and passing it quickly, Democrats have now decided to allow Speaker Pelosi to block it through proxies here in the Senate so that she can rewrite the bill with a ton of crap that has absolutely nothing to do with the public health emergency that we face at this moment.

Our legal team has been working through the night – literally around the clock - to carefully review the new bill line-by-line. And let me tell you, there is a lot to review. 1,400 pages, and Speaker Pelosi keeps adding to it.

The ACLJ is focused on protecting life and exposing Speaker Pelosi’s radical Left schemes. We will blow the doors open on Speaker Pelosi’s secretive plans to sneak unrelated, unconscionable concessions into this relief package.

In the March 22nd bill, Speaker Pelosi created a ONE HUNDRED BILLION-dollar slush fund called the ‘‘Public Health and Social Services Emergency Fund’’ with very broad parameters: “to provide grants to public entities, not-for-profit entities, and Medicare and Medicaid enrolled suppliers and institutional providers, including for profit entities to reimburse for health care related expenses or lost revenues directly attributable to the public health emergency resulting from the coronavirus.”

This language could allow the funding to be used to bail out the abortion industry.

We already exposed Speaker Pelosi’s first attempt to create a billion-dollar slush fund for the abortion industry in the first Coronavirus bill about 10 days ago. We defeated it then, but we warned you that she could try to do it again. That is why we have to go through this very complicated legislative language line-by-line.

We are also studying certain “Small Business” provisions in the current bill that could potentially be used to grant Planned Parenthood or other abortion providers with “small business” benefits included in the bill.

We just told you how we succeeded in having a measure removed from a draft of the bill that would allocate a billion dollars to fund or otherwise bail out the  abortion industry. Now that they are inserting all manner of extraneous language into the legislation, we are carefully reviewing the moving target for more abortion-related legislative tricks or “work arounds.”

We remain vigilant because we know Speaker Pelosi may again try to insert funding for the abortion industry or language to circumvent the Hyde Amendment.

Speaker Pelosi’s gargantuan bill also contains many items that, while perhaps worth discussing at another juncture, do not pertain to COVID-19 and should not be holding up this essential aide to Americans. Some of the nonsense uncovered by our legal team thus far include:

And then there are additional items that have no place even in this discussion, including:

This is nonsense – all when Americans are suffering, and it must end.

Our legal and government affairs teams continue to diligently dig deep into these bills. We are mobilizing our media advocacy teams to ensure that the Coronavirus relief package is drafted correctly to benefit American families in need, and not to serve as a wish list for the Left.

They can argue these other issues in other bills. This is about helping Americans RIGHT NOW.

3.25.2020 UPDATE: There are reports that the White House and the Senate have reached a consensus on the Senate bill. We will be reviewing this as language becomes available. But we are still working to ensure that Speaker Pelosi does not hold up this critical aid in the House by trying to insert her pro-abortion, radical wish list back into the bill.

JSL – US Surgeon General: Prepare for “Our Pearl Harbor Moment”

Radio Recap – The Economic Impact of the Pandemic

The economic stimulus goes live today. On today’s Jay Sekulow Live we discussed the economic impact on the American people. Obviously today with the economic numbers out we wanted to get into some of those details. We’ve got nearly ten million Americans who have filed for unemployment in the last...