Despite Nancy Pelosi’s hostage demands over the articles of impeachment, can the U.S. Senate move forward with a trial?

On today’s Jay Sekulow Live we discussed this new theory that we are analyzing at the ACLJ as we speak on possible Senate action on impeachment. We also discussed last night’s Democrat Presidential debate.

Let me put this forward to you. There’s a theory that a suggestion by Speaker Pelosi that while the President has been impeached, the Senate may not proceed with a trial until she officially notifies them is wrong. The process of Presidential impeachment cannot be completed and yet still be under her control.

Here’s the background. The Constitution neatly divides the impeachment process between the House and the Senate. Article 1, Section 2, Clause 5 proves that “The House of Representatives shall choose their Speaker and other Officers; and shall have the sole Power of Impeachment.” Article 1, Section 3, Clause 6 says “The Senate shall have the sole Power to try all Impeachments.” Nowhere there does it say that you have to have the articles of impeachment delivered to you. Nowhere there does it say that there has to be House managers presented to the Senate and named. It just says that the House impeaches and the Senate holds the trial.

All this in between, like the idea that “we can hold onto it forever as long as we want,” seems to be bogus under the basics of the Constitution.

ACLJ Senior Counsel and Director of Policy Harry Hutchison made the following point:

If you look at the doctrine of impeachment that goes back to Great Britain, and there are certain traditions that have been formulated in Great Britain with respect to the presentment of the actual impeachment.

House Speaker Pelosi has declared that President Donald J. Trump has indeed been impeached. We have public notice of this. The House has passed two articles of impeachment so you can clearly argue that consistent with the precise language of the Constitution, Speaker Nancy Pelosi has now lost control over the process. If you look at the constitutional language, the Senate has the sole power to try President Trump, not Speaker Nancy Pelosi.

This would mean that there’s no overlap in authority between the House and the Senate.

The bottom line is, Speaker Pelosi can’t have it both ways. President Trump can’t be impeached AND she still control the process. Either he is impeached (in which case the Senate has “sole power” over it), or he is not.

We also discussed last night’s Democrat Presidential debate. Vice-President Joe Biden made it clear he wants to put pressure on Israel in a negative way:

Bibi Netanyahu and I know one another well. He knows that I think what he's doing is outrageous. What we do is, we have to put pressure constantly on the Israelis to move to a two-state solution, not withdraw physical aid from them in terms of their security. And lastly, I think that Senator Warren is correct. We have led by not the example of our power, but the power of our example. And the example we're demonstrating now is horrible. It's hurting us badly.

In my opinion, that is not support of Israel. That’s a threat towards Israel.

You can listen to the entire episode with further analysis here. 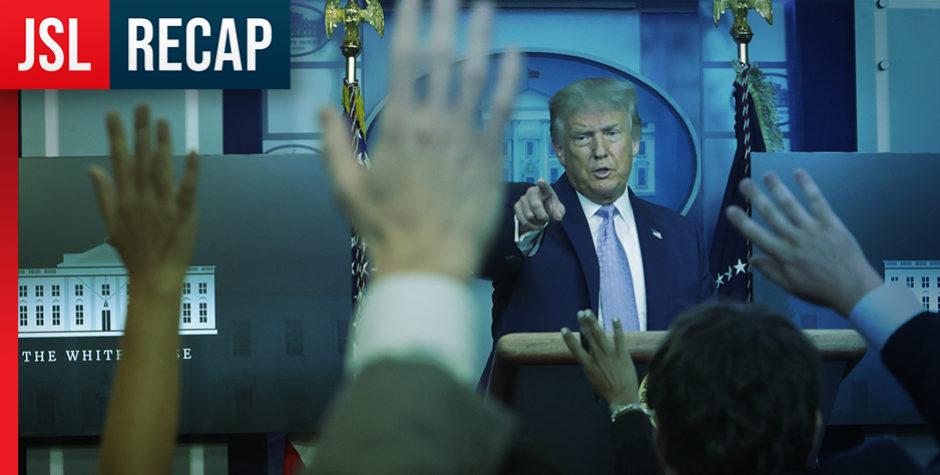