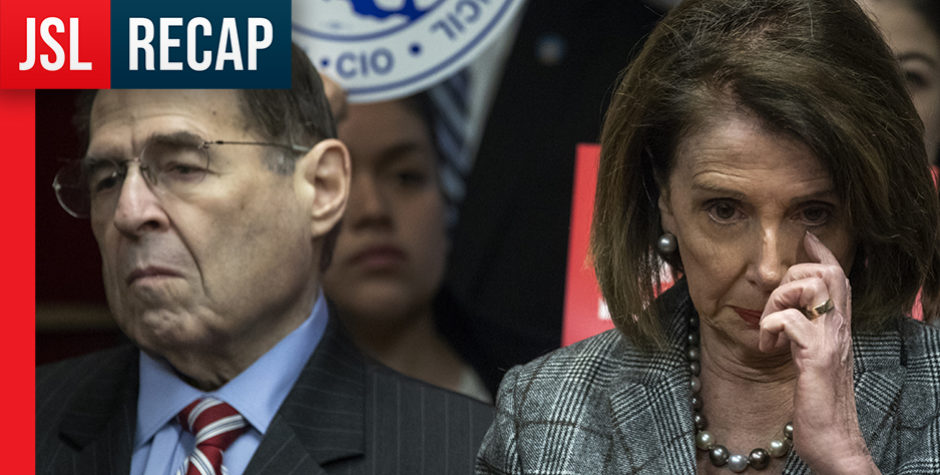 Today Speaker of the House Nancy Pelosi sent and posted a letter to House Judiciary Committee Chairman Jerry Nadler asking him to prepare a resolution to be voted on next week that would name impeachment managers and send the articles over to the U.S. Senate.

I have asked Judiciary Committee Chairman Jerry Nadler to be prepared to bring to the Floor next week a resolution to appoint managers and transmit articles of impeachment to the Senate.  I will be consulting with you at our Tuesday House Democratic Caucus meeting on how we proceed further.

That means there will likely be a vote next week. It will almost assuredly pass. The articles of impeachment will move to the U.S. Senate and then the Senate takes over. The trial will then begin.

There’s some procedural aspects to that trial that will have to be hashed out. We’ve said the Senate is likely to use the Clinton impeachment model. There are some rules that have to be determined. The reading of the articles is part of the process as is the Chief Justice swearing in the members of the Senate as jurors.

We are now at the point where we are likely looking at a Wednesday vote. Once that happens and the managers go over, that’s it for the House of Representatives’ action, in terms of control over the impeachment process.

The trial is coming. If the Senate gets it next week, depending on what day that happens, we could see a trial start the following Tuesday. There’s a holiday that upcoming Monday, so the trial in the Senate could begin on that Tuesday, unless they begin the procedural matters that day, which would mean we’d be looking at Thursday, Friday, and Saturday. To be clear, there are a lot of variables floating around so any of this may change. Also, the Chief Justice has cases that the Supreme Court is hearing so part of this will also have to accommodate his schedule.

It looks like the pressure campaign to keep this moving worked.

Here’s the truth of the matter, Senator Feinstein and Chairman Smith got taken to the woodshed a little bit. They spoke what was on their hearts, I think. They knew that this gig was up and it was time for Speaker Pelosi to send it over and yet, when they said that they got in trouble with their Democrat leadership and they tried to dial it back.

Here’s the reality: Speaker Pelosi had her bluff called. Leader McConnell said look, I don’t want these articles in the first place. You do whatever you want. The Senate is going to conduct these procedures by the rules that we decide. You are not going to dictate that to us and she ran out of time.

We’ll be covering this next week and bring you any further developments as they happen.

You can listen to the entire episode with our analysis here.

Radio Recap – DNI to Schiff: Release the Transcripts or I Will

What’s in the new Coronavirus stimulus bill? On today’s Jay Sekulow Live we discussed the new COVID-19 stimulus package which was passed by the U.S. Senate yesterday. The new $484 billion dollar interim emergency bill includes expanding funding for small business loans, which was an issue that...