Speaker Pelosi Is at It Again, Trying To Use Coronavirus Relief To Fund her Radical Pro-Abortion Wish List – to the Tune of THREE TRILLION DOLLARS | American Center for Law and Justice
Search  |  Logout  |  Login  |  Register 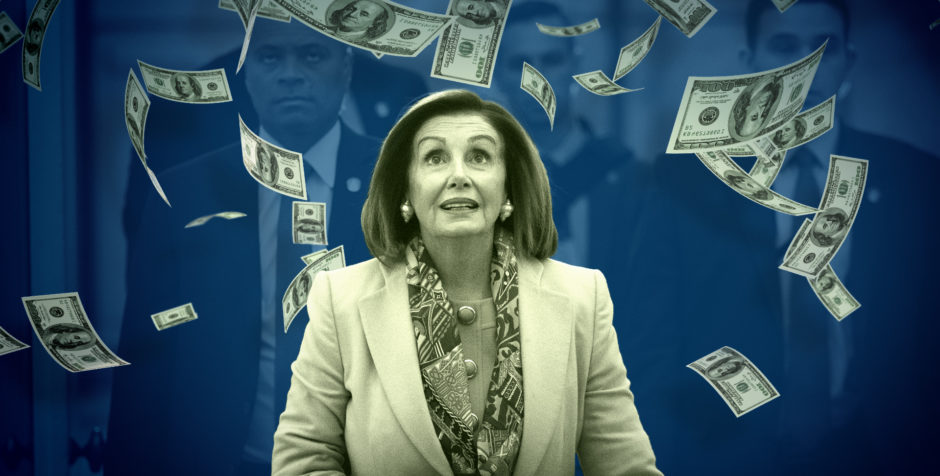 Speaker Pelosi Is at It Again, Trying To Use Coronavirus Relief To Fund her Radical Pro-Abortion Wish List – to the Tune of THREE TRILLION DOLLARS

Speaker Pelosi Trying To Use Coronavirus To Fund her Wish List

House Speaker Nancy Pelosi wants THREE TRILLION DOLLARS to fund her leftist agenda and she’s trying to pass it off as Coronavirus relief.

We’ve been warning you that she would try again, and we will be there to stop her from forcing the American people to fund her radical, pro-abortion wish list.

The House of Representatives proposed a new Phase 4 stimulus bill called the HEROES Act, and once again Speaker Pelosi and the radical pro-abortion Left are trying to shoehorn in funding for abortion and other items that have nothing to do with helping Americans during this crisis. As reported:

“Not content with giving a special bailout for Washington lobbyists, Pelosi seems determined to rip up a bipartisan compromise on a vital small-business aid program in order to funnel billions to the abortion industry,” a senior administration official told the Daily Caller News Foundation on Wednesday . . . “Once again, we’re seeing that the Left will do whatever it takes to force their radical agenda on the American people, even leveraging a global pandemic.”

$3 trillion is more than the reported Gross Domestic Product of entire countries like India, France, Italy, Canada, and the United Kingdom. That’s how much money Speaker Pelosi wants and she’s trying to use it to fund abortion and other radical leftist programs.

It’s truly reprehensible. That money is supposed to be helping struggling Americans keep their families fed, housed, and healthy while we battle the COVID-19 pandemic - not keep Planned Parenthood and other abortionists in business.

At a news conference, Sen. John Thune (S.D.) dismissed the bill from Speaker Pelosi and her top House lieutenants as an effort to “create talking points” and not a sincere proposal to help the American people, saying:

“The House of Representatives is reporting out today an 1,815-page bill at the cost of $3 trillion dollars and a laundry list of agenda items that have nothing to do with the coronavirus, but are part of their more permanent long-term agenda.

And I think what people need to know is that this is nothing more than a messaging exercise by House Democrats.

They didn't have any input from Republicans and I don't think a lot of input from some Democrats in the House of Representatives. So, it wasn't a sincere effort, or meaningful effort, to address a crisis that is being faced by the American people, but it clearly is an effort to try and create talking points for the 2020 election.”

At that same new conference, Sen. John Barrasso (WY) said of the Speaker’s proposal, “It’s big, it's bloated, it's partisan, and it's a payoff to her liberal constituencies.”

We’ve also already explained how the state funding portion of Speaker Pelosi’s plan would be used to prop up Left-leaning, abortion-funding states – just another way of accomplishing her abortion funding goal by funneling money through pro-abortion-run states.

This isn’t the first time Speaker Pelosi has tried to sneak abortion funding right under everyone’s noses. We told you how Speaker Pelosi tried to slip a BILLION dollars in taxpayer funding for abortions into the first Coronavirus relief package by padding in a workaround for the Hyde Amendment, which prohibits your federal tax dollars from paying for abortions or reimbursement for the payment of abortions.

We caught her attempt and took action, demanding that the abortion-funding language be removed from the bill. Abortion has no place in addressing the Coronavirus crisis. As a result, the language was removed and Speaker Pelosi’s attempt was thwarted. But now she’s trying again.

We’ve been working night and day throughout this entire crisis to ensure that pandemic relief goes where it is needed and does NOT create a pro-abortion, radical-Left slush fund. Speaker Pelosi is trying again.

We’re ramping up to fight back. We can’t let Speaker Pelosi pull another fast one. But once again, we must mobilize every resource we have to fight for life. Nearly 275,000 ACLJ members have signed our petition demanding no abortion funding be included in any Coronavirus relief bills.

But this time, the stakes are even higher and we need you. Sign our urgent petition NOW.