Since the 1973 landmark Supreme Court decision legalizing abortion in the United States, tens of millions of innocent unborn babies’ lives have been lost. And although there is nothing that we can do to bring those lives back, fighting for the unborn has remained a core issue for the ACLJ.

Members of the ACLJ are vital in helping us defend life. So, as we continue working on some of the most monumental abortion cases around the country and wait for the Supreme Court to decide on the most groundbreaking case in a generation, we wanted to hear from you. We asked you via social media to share your stories on why you became pro-life. You responded, sharing touching personal accounts with us about why defending life is so important to you. We wanted to highlight some of your stories as testimony of how important it is to stand for life, and to encourage others to share their experiences as well.

At Planned Parenthood and other abortion clinics, many doctors around the country attempt to persuade women to have abortions. Linda shared her experience with this on Facebook: 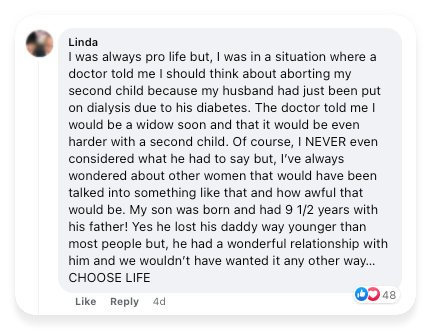 I was always pro-life, but I was in a situation where a doctor told me I should think about aborting my second child because my husband had just been put on dialysis due to his diabetes. The doctor told me I would be a widow soon and that it would be even harder with a second child. Of course, I NEVER even considered what he had to say, but I’ve always wondered about other women that would have been talked into something like that and how awful that would be. My son was born and had 9 ½ years with his father! Yes, he lost his daddy way younger than most people, but he had a wonderful relationship with him and we wouldn’t have wanted it any other way…CHOOSE LIFE.

We agree. Choose life! Adoption is another great option for those considering an abortion. Terry on Facebook was adopted and shared this with us: 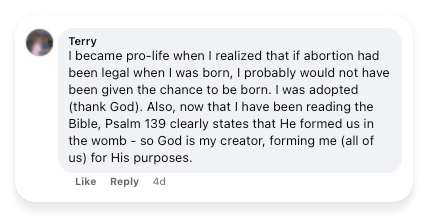 I became pro-life when I realized that if abortion had been legal when I was born, I probably would not have been given the chance to be born. I was adopted (thank God). Also, now that I have been reading the Bible, Psalm 139 clearly states that He formed us in the womb – so God is my creator, forming me (and all of us) for His purposes.

Choosing life could be one of the best decisions you make in a lifetime. Pam shared with us that she never regretted her choice of life on Facebook: 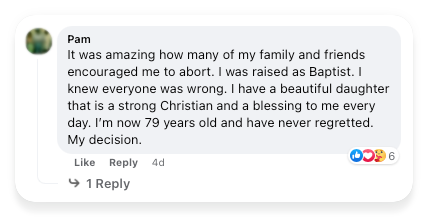 It was amazing how many of my family and friends encouraged me to abort. I was raised as Baptist. I knew everyone was wrong. I have a beautiful daughter that is a strong Christian and a blessing to me every day. I’m now 79 years old and have never regretted my decision.

At the ACLJ, we have supported critical heartbeat bills that protect babies in the early stages of pregnancy. We fully believe that life begins at conception, and so does Amy on Facebook:

I used to be pro-choice, but I saw the phrase, “Abortion stops a beating heart.” And it made me start thinking, and thinking about the pain a baby feels. Then I think God started to convict me, that life is sacred from the moment of conception.

These stories remind us of why we do what we do in the first place. It empowers us to keep fighting as a new Administration further empowers the abortion industry and spends millions of your tax dollars to keep the business growing. We’ve filed three critical amicus briefs at the Supreme Court in a case that could finally undo the grievous error that is Roe v. Wade, and we are involved in at least nine critical pro-life cases right now. We are the pro-life generation, and we won’t stop until your stories are heard and Roe v. Wade is overturned once and for all.