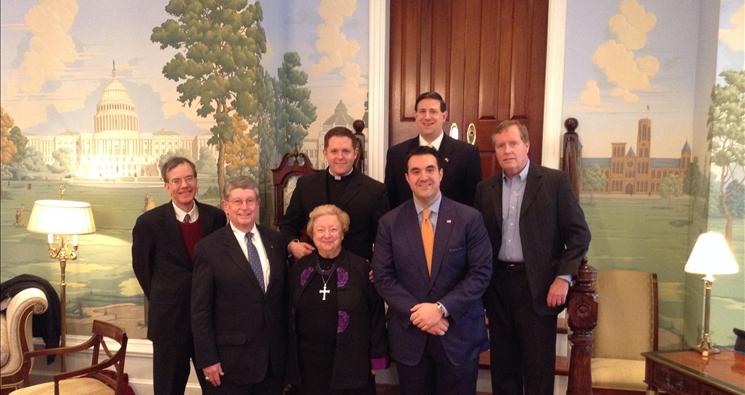 Do pro-life Americans have free speech rights – the right to quietly talk to willing passersby on the street corner – or are the public sidewalks surrounding abortion clinics somehow speech free zones impervious to the protections of the First Amendment?

That is the precise question considered by the Supreme Court today in McCullen v. Coakley.

Pro-abortion legislators in Massachusetts passed legislation making it illegal for anyone to speak on the public sidewalks – otherwise known as exercising the First Amendment – within 35 feet of abortion clinics.  Illegal that is for everyone but employees of the abortion clinics.

Today’s case was the epitome of the abortion distortion – the fact that abortion changes the calculus of longstanding legal principles.

It is axiomatic in Supreme Court jurisprudence that public sidewalks are open public fora.  In other words, your free speech rights are guaranteed on public sidewalks.  For the government to prove otherwise, they would have to show that any restriction is based on some overwhelming or compelling government interest and that the restriction they wish to place on that speech is limited or narrowly tailored in such a way that it imposes the smallest imposition reasonably possible on your free speech.

Just because the government doesn’t like your speech or agree with it does not mean that they get to restrict it – not liking it is not a compelling interest and banning it is not narrowly tailored.

That’s First Amendment law in a nutshell … in every case that is but abortion.  Regarding abortion, the rules too often become distorted in favor of abortion and against pro-life viewpoints.  To some, the First Amendment just doesn’t cover pro-life speech.

That abortion distortion was front and center today.

For years before this pro-abortion restriction passed, Eleanor McCullen, an elderly pro-life sidewalk counselor, had ministered to women seeking an abortion.  She would kindly and quietly counsel women approaching abortion clinics about the value of human life, even helping them find assistance from pro-life groups when they chose to keep their babies.  She was literally saving lives.  And she is one of the nicest women you would ever hope to meet; I had the privilege of meeting her today at our office after the oral argument (pictured above along with a fellow plaintiff Father Eric Cadin, standing behind her).

After the statute passed, Mrs. McCullen’s ministry was essentially shut down.  Refusing to be silenced, she challenged this unconstitutional law.

Most disturbing about this case though is that it was not just Massachusetts defending this pro-abortion law; the Obama Administration sent its lawyers to the Supreme Court to argue that this anti-pro-life speech law in no way violated the Constitution.

At one point the Obama Administration’s lawyer actually argued that there was no such thing as a right to conduct a quiet conversation on a public sidewalk.  Justice Kennedy was baffled.

In a painfully ironic moment, Justice Kagan compared abortion clinics to slaughterhouses, asking what if this statute had been written about slaughterhouses to keep animal rights activists from blocking the entrance and exits.

Jaws dropped throughout the Courtroom when she said that.  The comparison is eerie, as abortion clinics take the lives of millions of unborn Americans each year.

This case should be decided later this summer, and a lot rides on the Court’s opinion.  Will it uphold free speech or will it continue to promulgate the abortion distortion?

Fourteen years ago, ACLJ Chief Counsel Jay Sekulow argued an almost identical case, Hill v. Colorado.  Importantly, it was a case in which Justice Kennedy issued a stinging dissenting opinion on the side of pro-life speech stating that the Court’s ruling upholding a similar buffer zone “contradict[ed] more than a half century of well-established First Amendment principles.”  The three dissenting voices in Hill, Justices Kennedy, Scalia, and Thomas, remain on the Court today.

While it is never safe to make a presumption about a case based on oral argument, there were a number of Justices who questioned the constitutionality of this Massachusetts statute.

Today, Justices Kennedy, Scalia, and Alito were highly critical of the Massachusetts statute. Even Justice Kagan, seemed concerned about how far this particular law went, asking why a 35-foot buffer zone, why so large, saying that the buffer zone would be almost as large as the Courtroom.  However, Justice Kagan, like Justice Sotomayor, took a more nuanced approach in their questions.  Justices Breyer and Ginsburg who are the only Justices from the Hill majority still on the Court, appeared dismissive of the pro-life arguments.

Justice Thomas, who is traditionally silent during oral argument, did not have any questions; but surprisingly, Chief Justice Roberts didn’t say a word during the course of oral arguments.

We filed an amicus brief in this case, arguing in no uncertain terms that Hill was wrongly decided and that pro-life free speech should hold the same place as other free speech under the Constitution.

Pro-life sidewalk counselors like Mrs. McCullen and Father Cadin should not be treated as second-class citizens.  The public sidewalks outside of abortion clinics should no longer be speech free zones for those with pro-life views, but should be constitutionally protected free speech zones for all Americans.