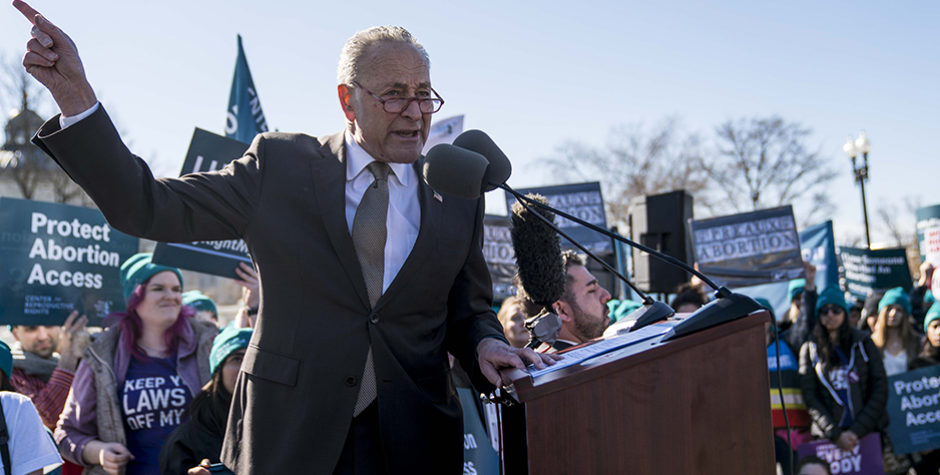 In an exceedingly rare – and well deserved – public reprimand, Chief Justice Roberts blasted Senator Schumer for “threatening” conservative Supreme Court Justices over an abortion case when Sen. Schumer said the Justices “won’t know what hit you” and “will pay the price.”

Senate Minority Leader Chuck Schumer stood on the steps of the Supreme Court at a pro-abortion protest and directly threatened Justices Neil Gorsuch and Brett Kavanaugh – while they were hearing a critical abortion case. Pointing directly behind him at the Supreme Court, he proclaimed:

It was a shockingly disgusting – but also unsurprising – display of just how far the pro-abortion Left will sink to worship at the altar of abortion.

But what is equally remarkable is the direct response of the Chief Justice of the U.S. Supreme Court John Roberts. Issuing an unprecedented public statement, the leader of the third co-equal branch of government stated:

This morning, Senator Schumer spoke at a rally in front of the Supreme Court while a case was being argued inside. Senator Schumer referred to two Members of the Court by name and said he wanted to tell them that “You have released the whirlwind, and you will pay the price. You will not know what hit you if you go forward with these awful decisions.” Justices know that criticism comes with the territory, but threatening statements of this sort from the highest levels of government are not only inappropriate, they are dangerous. All Members of the Court will continue to do their job, without fear or favor, from whatever quarter.

As an attorney, I can tell you that what he said is remarkably profound.

Supreme Court Justices are appointed for their demonstrated commitment to the law and our Constitution, regardless of party affiliations, and should be free to make their decisions free from the threat of violence and retribution.

There is no excuse.

Yet, Sen. Schumer’s office was quick to make excuses, desperately trying to turn his words around on conservatives accusing them of deliberately misconstruing his meaning. According to spokesperson for Schumer, the Senator was referring to “the political price Senate Republicans will pay for putting these justices on the court.”

Having stood on those steps, I can tell you the Senate was in front of him, yet he turned around and pointed at the Supreme Court and called the Justices by name, wagging his finger at the Supreme Court where they were hearing a case when he said “you will pay the price” and “you won’t know what hit you.” There is no mention of politics there. That’s just a direct threat.

There is no confusion here. This was meant to intimidate two respected Supreme Court Justices from doing their job properly.

There can be ZERO TOLERANCE for what Sen. Schumer has said. Regardless of his stated intent after-the-fact, his words are extremely dangerous. It only takes one person to interpret Senate Minority Leader Schumer’s speech as a call to action – or a so-called dog whistle – to put the safety of these Justices, their families, and their colleagues in serious jeopardy.

The Chief Justice was absolutely correct in defending his colleagues, the rule of law, our constitutional order. He not only had the right, but the responsibility, to defend Article III of the Constitution. Direct threats of physical violence are NOT just political rhetoric or voicing policy disagreements.

The following day, Sen. Schumer took to the Senate floor and again tried to shift the focus from himself, saying his words were taken out of context. Of his inflammatory comments, Sen.  Schumer only said: “I should not have used the words I used. They didn't come out the way I intended to." What he did not do was apologize. Instead, he used the opportunity to continue to unabashedly promote abortion.

Sen. Schumer even attempted to excuse his behavior by implicating his hometown, stating: "I'm from Brooklyn. We speak in strong language."

This is not Goodfellas, Senator. You cannot brush off an unveiled threat against two United States Supreme Court Justices because you’re from Brooklyn and want to talk like a tough guy.

Sen. Schumer has been virulently opposed to Justice Gorsuch and Justice Kavanaugh since even before either was appointed. Speaking to CBS News, Sen. Schumer said he would work to oppose the appointment of Brett Kavanaugh with "everything I've got."

At a minimum, Sen. Chuck Schumer needs to be officially reprimanded and censured immediately. He has shown a terrible lapse in judgment. Or worse, was this intentional and calculated?

This is exactly why elections are so important. We need to be voting for conservative lawmakers who will in turn appoint qualified, conservative judges and Supreme Court Justices. Bullies like Sen. Schumer will only learn this sort of talk will not be tolerated by our votes.