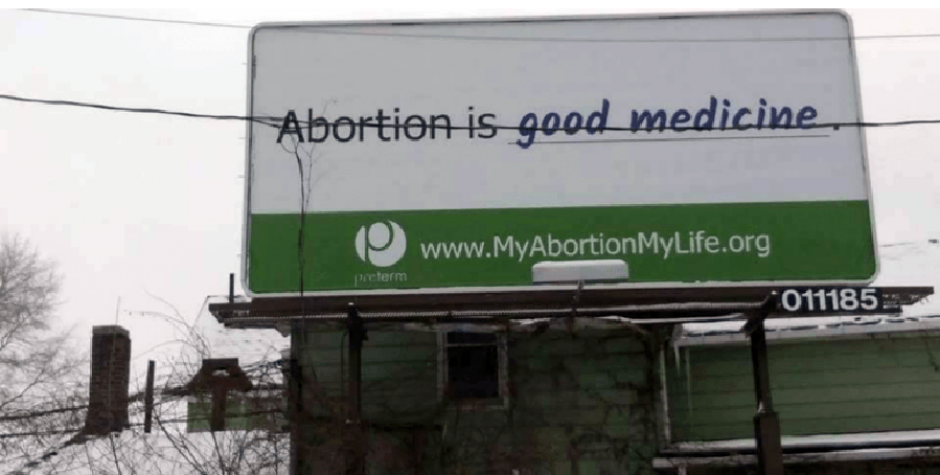 Abortion is Not a Sacred Blessing

Abortion is Not a Sacred Blessing

At the ACLJ, many of us repeat a phrase that sounds shocking until you understand the rationale behind the strong words – the truth. Big Abortion, the clinics, Planned Parenthood, and their various lobbying arms worship at the altar of abortion. It is, in many ways, a religion unto itself.

Here is how the abortion business actually explains why its billboard campaign is so important: “Abortion is a normal and necessary part of people’s lives.”

Think about that for a moment. How ironically sick and twisted. Abortion – the taking of an unborn child’s life – is a “necessary part of people’s lives”? No. It ends people’s lives.

Here’s a sample of some of the 16 billboard messages Ohio’s biggest abortion provider is putting up:

See what we mean when we say these extreme abortionists actually worship abortion and extol the virtues of abortion. The language they use is ironically full of religious words.

Is this campaign some attempt to give people a false sense of hope that they will not feel the guilt of this decision for decades to come?

Abortion is sacred? Really. More religious talk to make people – the abortionist, maybe, and the person, certainly, choosing to have an abortion – feel “ok” about taking the life of a baby.

Abortion is a family value? Killing children before they have an opportunity to be in a family is the opposite of family values – where the family, the child, has no value whatsoever. These children have no chance of ever experiencing family – parents, grandparents, aunts, uncles, cousins, brothers, and sisters.

Abortion is hope? But wait, death for the child in the womb is a totally hopeless situation for the aborted baby.

Abortion is liberty? No. Abortion is the absolute antithesis of liberty. It snuffs out the most important liberty with which we have been endowed by our Creator – the right to life.

Abortion is good medicine? Except for the child who is killed by an abortionist. The Hippocratic Oath is to “do no harm.” Yet these “doctors” are voluntarily taking a defenseless baby’s life for money. That’s not good medicine; it’s slaughter.

Some of these assertions don’t dignify a response because they are straight up partisan, abortion-distortion at its worst.

Abortion must remain safe, legal, and accessible — but stigma is standing in the way.

These billboards are from a new religious text, which – unlike any other faith – says you will be blessed by killing your unborn child and that you will be performing a sacred duty by taking this life while calling yourself a doctor when really all you do is end lives.

But beyond proselytizing this sadistic religion of abortion through billboards, Big Abortion is actually seeking to force pro-life pregnancy centers (many of which are motivated by their Christian faith to save lives) to actually promote abortion.

At the ACLJ, we’re representing numerous pro-life pregnancy centers nationwide in federal and state courts to end these pro-abortion laws. Now a major case is at the Supreme Court and we are filing a critical amicus (friend-of-the-court) brief in just days to defend pro-life pregnancy centers and the countless babies and mothers they serve. You can sign on to our brief below.