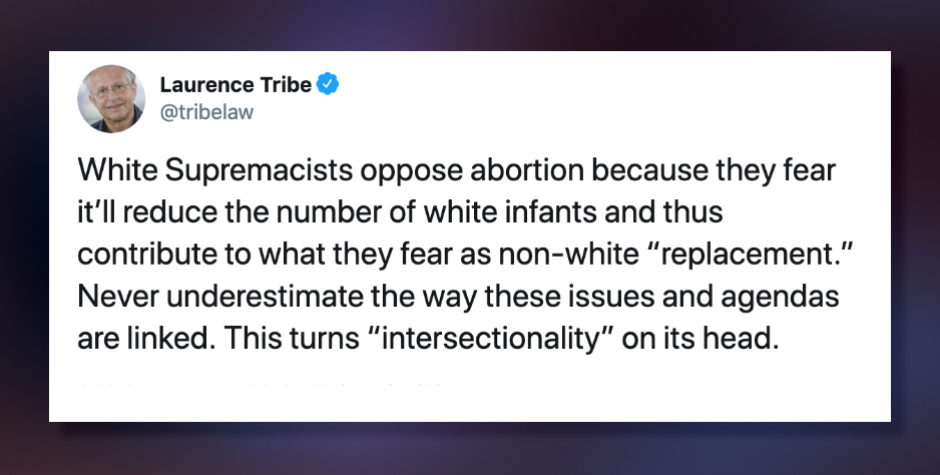 A Response to Professor Tribe’s Deeply Deceptive Claims about Race, Racism, and Abortion

White Supremacists oppose abortion because they fear it’ll reduce the number of white infants and thus contribute to what they fear as non-white “replacement.”

Virtually anyone armed with a minute amount of commonsense and an elementary understanding of history knows that Professor Tribe’s analysis of abortion is hugely deficient. As I have shown in my law review article, Waging War on the “Unfit” From Plessy v. Ferguson to New Deal Labor Law,  history unmistakably shows that the pursuit of unlimited abortion arose out of a eugenics program featuring links between German and U.S. eugenicists. These links were part of an ascendant campaign favoring involuntary sterilization that culminated in the state of Virginia becoming a leader in the movement to prevent interracial marriages on grounds that “interbreeding” poses a public health risk.

These moves appear consistent with the advocacy of the founder of Planned Parenthood’s reputation—Margaret Sanger—who clearly identified African Americans as among those members of the human race whose reproduction she wanted to control.

Professor Tribe has demonstrated his incoherence as he inverts pertinent statistics on abortion. This signifies four things:

First, he should immediately retract his bogus claims.

Third, if he really believes that white supremacy aims to reduce the number of minority births, then the logic of his analysis would require him to label the pro-abortion position of Planned Parenthood as one that is harmonious with white supremacists’ efforts.

Finally, he should support the efforts of the American Center for Law and Justice (ACLJ) and help stop abortion now, protect life everywhere, and defund Margaret Sanger’s intellectual offspring—Planned Parenthood.