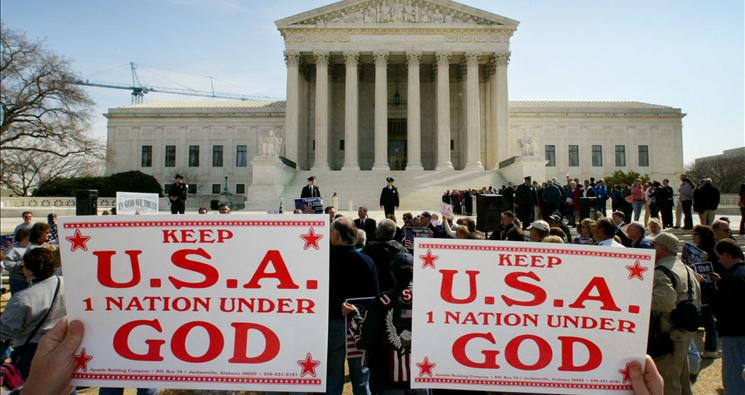 NBC Tribute to USA Cuts "Under God" From Pledge

The United States Open golf tournament - 111 years of history.  It's America's most venerable and prestigious golf tournament.  And, for the third time in its long history, the U.S. Open was held at Congressional Country Club, just outside the nation's capital.

NBC televised the event, in conjunction with the United States Golf Association (USGA).  They spent a lot of time and resources chronicling the history and heritage of this great event.

But, when they aired a feature story designed to pay tribute to the nation itself, that's where the problems began.

The move instantly offended millions of Americans, as it should.  NBC tried to explain it away with a brief apology hours later, but the fact is that was too little, too late.

In an attempt to chronicle our nation's history and heritage, how could you edit out the phrase 'under God' from the Pledge of Allegiance?  This time-honored tradition has been a critical part of the Pledge for more than half a century.  Congress passed this law in 1954 and you can read it here.

NBC and the USGA treated the phrase 'under God' like a throw-away line, an afterthought.

As you know, we defend the Pledge of Allegiance - and the phrase 'under God' - in courtrooms across America from legal challenges by organizations like the Freedom From Religion Foundation and others.  And, we also defend the Pledge in the public arena.

That's why we're mobilizing now, putting together a Letter of Protest - demanding that NBC put in place a policy that ensures when the Pledge airs, so do the words, 'under God'.

Send a message to NBC and the USGA - the Pledge is NOT the Pledge without the phrase 'under God'.  Add your name now.