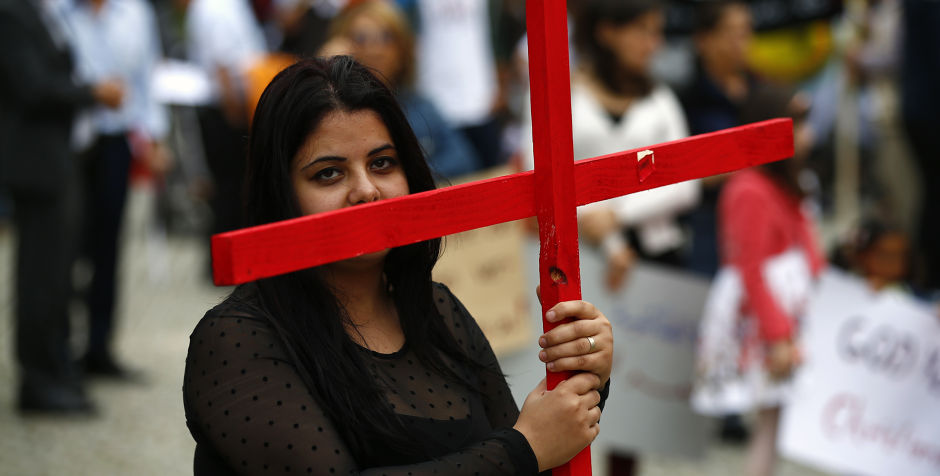 For nearly two years, Christians have been aggressively and systematically targeted and killed by ISIS – the Islamic State.

On Capitol Hill, our team continues to work behind the scenes to encourage officials to formally identify ISIS’ atrocities against Christians as genocide. Last month, the ACLJ sent a letter to Secretary of State John Kerry that provided a detailed explanation of international law, why it applies to ISIS, and how Christians are suffering from genocide.

We are pleased to report that yesterday, the House Foreign Affairs Committee unanimously approved a bipartisan resolution that finally declares that these atrocities committed by ISIS are “genocide.”  The resolution provides:

Whereas Christians and other ethnic and religious minorities have been murdered, subjugated, forced to emigrate and suffered grievous bodily and psychological harm, including sexual enslavement and abuse, inflicted in a deliberate and calculated manner in violation of the laws and treaties forbidding crimes against humanity, and the United Nations Convention on the Prevention and Punishment of the Crime of Genocide . . . the atrocities committed against Christians and other ethnic and religious minorities targeted specifically for religious reasons, are, and are hereby declared to be, “crimes against humanity”, and “genocide”.

The passage of this resolution, and its recognition of the fact that ISIS is committing genocide against thousands of Christians, is a significant victory and a significant step in the right direction. But we must not be content to stop there. It is important that we push forward in our efforts and pressure the full Congress and even more importantly, President Obama’s State Department, to also declare ISIS’ acts genocide.  We are calling for an immediate vote on this critical resolution in Congress.

In addition, our work in this regard continues abroad.

Our European affiliate, the European Centre for Law and Justice (ECLJ), recently submitted legal documents to the U.N., urging it to declare that Christians in Syria and Iraq are victims of genocide. Next week, we are preparing to present an oral statement before the U.N., also urging a declaration of genocide.

We are gaining traction. As we reported, a few weeks ago, “the Parliamentary Assembly of the Council of Europe voted nearly unanimously to declare that ISIS – the Islamic State – is committing genocide and other serious international crimes.”  The European Parliament also unanimously passed a vital resolution specifically recognizing, in detail, the ongoing and horrific “genocide against Christians” and calling for the nations of the world the band together in direct action to put and end to these atrocities.

But the United States of America must stand against ISIS and recognize its barbarism for what it is: Genocide.  We must honor our international commitments, not play legal word games to avoid them.

President Obama’s silence enables evil. As we said before:

ISIS must be stopped – we cannot rest.  We must press forward and do right by seeking justice and defending the oppressed. The ACLJ will continue to fight for victims of religious persecution here, and abroad.

Stand with us.  Over 334,000 have made their voice heard worldwide.  Join them.  Make your voice heard.  Sign our Petition today.