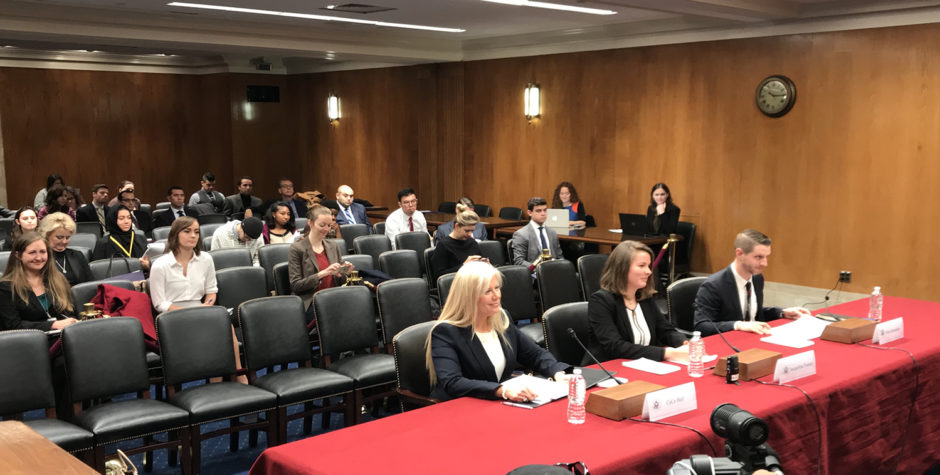 Today marks 404 days that American Pastor Andrew Brunson – a U.S. citizen – has been falsely imprisoned in Turkey because of his Christian faith – separated from his wife and family who desperately miss him.

For nearly a year, we at the ACLJ have been aggressively fighting across the globe for this wrongfully imprisoned U.S. pastor.

Today I will be testifying before Congress on Pastor Andrew’s behalf at the U.S. Helsinki Commission hearing. Below is an excerpt of our written submission to the Commission.

Andrew Craig Brunson is a United States citizen and pastor from North Carolina. For over 23 years, Pastor Brunson has lived peacefully in Turkey, serving as pastor of the Izmir Resurrection church, and raising his family without incident. Then, on October 7, 2016, Pastor Brunson arrived home to find a written summons to report with his passport to a local police station. Believing the summons was related to his routine application for a renewal of his residence visa, Pastor Brunson promptly reported to the Izmir police, only to be arrested and informed that an order of deportation had been entered against him, as he had suddenly been deemed a threat to national security. He was to be held in the Harmandali Detention Centre pending deportation. However, Pastor Brunson was never deported; instead he remains unjustly incarcerated in Turkey, wondering if he has been forgotten, as today marks the 404th day of his detention. And just what crime has Pastor Brunson committed? He literally has no idea and has yet to be charged with any crime.

While in prison, Pastor Brunson has lived under inhumane conditions, and has spent extended periods of time in a cell meant for eight people, but which at times has held as many as 22 prisoners, of which Pastor Brunson is always the only Christian. During his incarceration, Pastor Brunson has lost over 50 pounds, he has lost precious time with his family that can never be replaced, but worst of all, he has lost all hope, wondering why Turkey, a NATO ally and a country he loves and has served for over 2 decades, has been able to hold him hostage, an innocent United States citizen, for over a year.

During this ordeal, Pastor Brunson’s plight has caught the attention of hundreds of thousands of people around the world and there have been an unprecedented amount of high level demands for Pastor Brunson’s release. And yet, on August 24, 2017, the Turkish government decided to levy new and additional accusations against Pastor Brunson, these just as ludicrous as and even more disconcerting than the original. They include, Political or Military Espionage, Attempting to overthrow the Government, Attempting to overthrow the Turkish Grand National Assembly, and Attempting to overthrow the Constitutional Order, with the last three not only carrying aggravated life sentences, but requiring that the accused used force and violence. And once again, no evidence has been put forth to substantiate such ridiculous accusations. Pastor Brunson has and continues to adamantly maintain his innocence and deny all the accusations. He has reiterated that his sole purpose for being in Turkey for the past 23 years was “for one purpose only. To tell about Jesus Christ.” He has further stated that he has “done this openly, in front of the government.” And so the question remains, why are they still holding him?

Pastor Brunson’s daughter, Jacqueline, will also be sharing her heartfelt testimony today before the Commission. (You can read her full written testimony here.)

In February I got married. We didn’t want to get married without my parents present, but because my husband is in the military, we could not postpone it. We had received my father’s blessing, but we felt so terrible about getting married while he was imprisoned. Neither of my parents were present when I got married. I will never get that moment back. For those of you who are fathers to daughters, I’m sure you would want to walk your daughter down the aisle. My father didn’t get that. I didn’t get that. My husband and I decided to have a civil ceremony and to postpone our wedding ceremony until my father is home. I’m still waiting for my wedding. I’m still waiting to wear the wedding dress that I got almost a year and half ago. I’m still waiting for my dad to walk me down the aisle. I’m still waiting for that father-daughter dance.

In his letters, my father says that the hardest part of his imprisonment is missing out on being with his family. That is what he most wants. He has missed his only daughter getting married, and might miss my college graduation. He has missed helping my older brother make career choices and witnessing his accomplishments at Cornell. He has missed being with my younger brother who has so badly needed his dad and mom in the last year. These are the things that pain my dad the most, not being able to be with us.

In a recent visit with my mother, my father said “I plead with the Lord to release me by Christmas so I can be with our son in his last year in high school and at our daughter’s graduation before she moves to Germany. But if I’m still here at Christmas, I’ll thank God for sending Jesus to be born. If I’m still here at New Year, I’ll thank him for helping me make it through this year. If I’m here on my birthday, I won’t be like Job and curse the day I was born. I’ll give thanks for the life I’ve lived.” My father is handling his situation better than he was before. But we still want so desperately for him not to have to face Christmas imprisoned again. We want him to be home again, with his family.

Jacqueline’s testimony is powerful, and conveys the depth of hurt and loss that the Brunson family has endured because of Pastor Andrew’s false imprisonment. We hope that Congress will respond to today’s testimony and to do everything in its power to ensure Pastor Andrew’s immediate release from Turkey and safe return to his family here in the U.S. There should be no more lost moments for the Brunson family.

Stand with us and let Pastor Andrew know that he is not forgotten. Join the more than 380,000 people who have signed our petition to free Pastor Andrew Brunson.