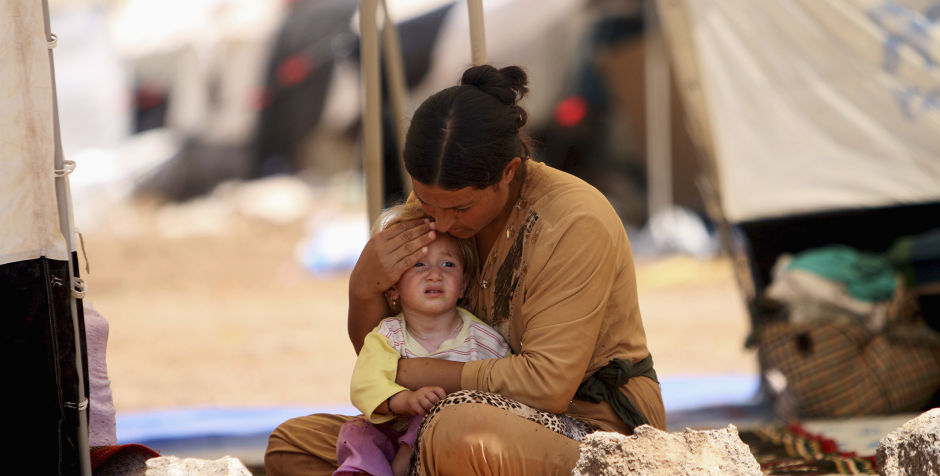 Reports of one of ISIS’s many atrocities are making their way around the world, no thanks to mainstream western journalists:  In August, 2015, ISIS crucified and beheaded 11 or 12 indigenous Christian missionaries – after publicly gang-raping the women.

At one of the locations, ISIS “summoned a crowd” and then crucified the missionary team leader and his 12 year old son, along with two other young men in their twenties.

“All were badly brutalized and then crucified,” the group’s ministry leader said. “They were left on their crosses for two days. No one was allowed to remove them.” According to reports, the ISIS militants posted signs by their Christian victims identifying them as “infidels.”

The other group of missionaries, including two women, was taken to a different location.  Staring down certain death, these martyrs also refused to convert to Islam.  The two Christian women prayed aloud while being publicly gang-raped, which according to reports, caused their ISIS abusers to “to beat them all the more furiously.” As relayed by the group’s director:

The missionaries were beheaded and their bodies hung on crosses.

This is the same evil that forced a child to behead a Syrian soldier in June, and that has released numerous videos of medieval and barbaric executions in the past few years.

Even as recent as last week, news broke that German officials are investigating a young pregnant girl’s “honor killing” at the hands of her family. The reason? She was gang-raped, and therefore “unclean.”

Here in America, we’ve heard so much of Islamic beheadings and killings, I’m afraid our consciences are growing numb. It’s just easier to ignore it.

Still, in the face of the darkest and most vile wickedness, a Christian ministry affiliated with the martyrs tells a story of hope.  In Amman, Jordan, a particular Muslim man,

whose name is withheld for security reasons, went to a Christian meeting with the intention of killing the aid workers gathered there. Something kept him from following through on his plan, though, and that night he saw Jesus in a dream.

The next day he came back and said, “I came to kill you, but last night I saw Jesus, and I want to know what are you teaching—who is this One who held me up from killing you?” He received Christ with tears, and today he's actually helping in the church, helping out other people. We're praying for lots of such Sauls to change to Pauls.

News of ISIS’s spreading bloodlust, and even the selfless counter-movement mounted by Christian aid missions, goes largely unreported by Western news outlets – all while Christians and international mission groups are crying out for help.  One Jewish survivor of the Nazi’s rise to power said it like this:  ISIS “is unprecedented in its primitive savagery compared with the more sophisticated Nazis. When it comes to pure lust for horror and sadism, they are unprecedented.”

Just this week, the ACLJ signed a letter to President Obama imploring him to officially recognize that ISIS’s heinous actions against Christians constitute genocide. The letter recounted ISIS’s growing reign of terror and laid out the legal basis requiring his action.

Please, don’t be lulled into silent inaction and contagious apathy.  Critically examine the brutal facts of the Islamic State for yourself.  Speak up for our Christian brothers and sisters, and lift them up in prayer, as we continue aggressively advocating for the persecuted Church across the globe.

As the Apostle Paul admonished, “Redeem[] the time, because the days are evil.”