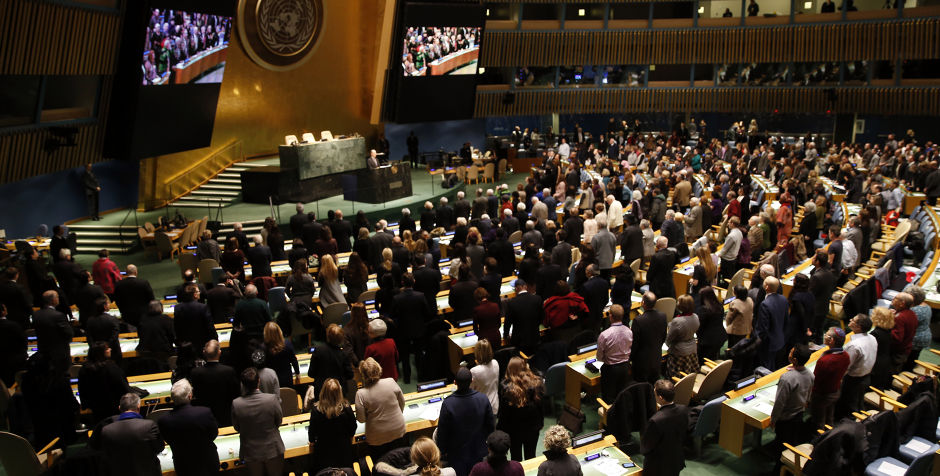 Global Leaders Speak Out for Saeed

As the 70th Session of the General Assembly of the United Nations convenes in New York City, the fight to save American Pastor Saeed Abedini continues. With global leaders gathering for numerous meetings, Naghmeh Abedini continues her efforts to spread her family’s story, encouraging leaders from around the world to join the fight to save Pastor Saeed.

This past weekend, Naghmeh spoke before more than 100 Parliamentarians from nearly 50 countries at a gathering hosted by the International Panel of Parliamentarians.  Following Naghmeh’s presentation, 67 Parliamentarians signed a letter to the Speaker of the Iranian Parliament calling for Pastor Saeed’s release.

As the International Panel of Parliamentarians for Freedom of Religion or Belief, we write as a network of parliamentarians from diverse political, religious and geographical backgrounds to express grave concerns about limitations on freedom of religion or belief in your country. We are alarmed by ongoing reports of violations of this fundamental freedom for religious minorities, including Christians and the Bahá’ís. We respectfully ask you to ensure that all individuals in Iran, be they Muslim, Christian, Bahá’í, Atheist, Zoroastrian, Jew or from another faith, can fully enjoy freedom of religion or belief without fear of violence or discrimination.

We are particularly concerned about Pastor Saeed Abedini, who has been jailed for nearly three years. We understand he has been held in intolerable conditions for merely peacefully exercising his faith in private homes. We specifically request the release of Mr. Abedini, as well as other Christians…

These 67 Parliamentarians raised their voices for Pastor Saeed and other religious minorities persecuted in Iran, speaking directly to their counterpart in the Iranian Parliament. Several members of Parliaments also committed to   leading efforts in their own countries to pressure Iran to release Pastor Saeed. The ACLJ International Legal Team will continue our work with leaders around the world to raise international pressure for Pastor Saeed’s freedom.

The ACLJ’s massive letter-writing campaign continues. We have gathered over 265,000 letters that are being shipped every day to UN Secretary-General Ban Ki-moon urging him to meet with Iranian leaders and demand compliance with international human rights norms.

The President of Iran will be on U.S. soil for U.N. meetings this week. It’s time for the United States to lead the world in demanding justice for Pastor Saeed.