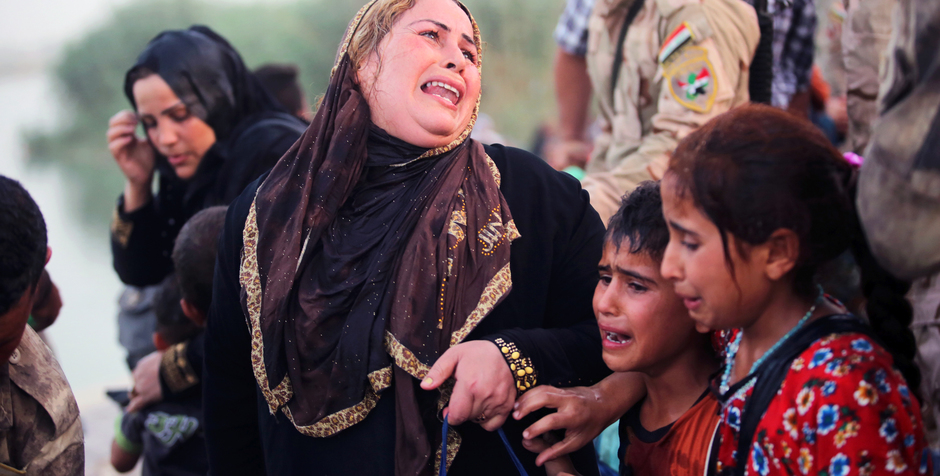 Genocide: The Problem From Hell Continues

Genocide: The Problem From Hell Continues

It is mind-boggling, heart-rendering and alarming.

Yet genocide—the intentional action to systematically eliminate an ethnic, national, racial or religious group—accelerates despite the rising demands to stop this horror. Although, Secretary of State John Kerry has declared that Christians as well as Yazidis and Shi’a Muslims are suffering genocide at the hands of the terrorist group known as the Islamic State, Cardinal Theodore McCarrick in a recent interview with Genocide Watch, confirms that ISIS continues its genocidal quest to “purify” the Mideast so Islam can reign supreme.

Consider the following: Christians numbered about 1.5 to 1.4 million members in Iraq before 2003 but today Iraqi Christians amount to only 275,000 or even 200,000. That’s a staggering 80-87% drop in the Christian population. In Syria, two-thirds of its Christian population, which numbered 1.75 to 1.5 million in 2011, is now displaced or slaughtered. Despite the fact that Christian communities of Iraq and Syria are ancient ones with ties to the earliest Church, and while some of these Christians still pray in the Aramaic language of Jesus of Nazareth and trace their religion to Thomas (one of the twelve apostles), they now face a situation that Pope Frances calls an “ecumenism of blood.”

After intense public pressure, the Obama Administration finally recognized the “genocide against . . . Christians.” Nevertheless, the Administration refuses to make the admission of Christian refugees from Syria a top priority.

In 1946, the first session of the United Nations General Assembly adopted a resolution that affirmed that genocide was a crime under international law. In 1948, the UN General Assembly adopted the Convention on the Prevention and Punishment of the Crime of Genocide. More recently the United Nations Security Council determined that genocide is a crime under international law regardless of whether committed in time of peace or time of war. Five months ago, the House of Representatives unanimously passed a bipartisan resolution by a vote of 393 to 0 declaring ISIS beheadings, enslavement, mass rape, and other atrocities against Christians as genocide.

Whereas Christians and other ethnic and religious minorities have been murdered, subjugated, forced to emigrate and suffered grievous bodily and psychological harm, including sexual enslavement and abuse, inflicted in a deliberate and calculated manner in violation of the laws and treaties forbidding crimes against humanity, . . . the atrocities committed against Christians and other ethnic and religious minorities targeted specifically for religious reasons, are, and are hereby declared to be, “crimes against humanity”, and “genocide.”

And yet the slaughter continues.

For instance, only a few sick or elderly Christians remain in the ISIS stronghold of Raqqa, Syria, placing Christians and Christianity on the edge of extinction. For centuries, Syria was a melting pot that included Sunni Muslim, Alawites, Christians, Armenians and others. Today, the sand runs red with the blood of Christians and others. Now the vicious ISIS ideology that sustains genocide has spread to parts of Asia and North and Central Africa. Regrettably, despite this spreading virus, the Obama Administration refuses to clearly identify the party responsible for this terror or take aggressive action to end the slaughter.

The Obama Administration’s refusal becomes all the more poignant by noticing that the Islamic State, in its July 31st issue of Dabiq, titled “Break the Cross,” the Islamic State maintains that its genocidal terror campaign is motivated by the pursuit of radical Islamic superiority. The Islamic State supplies unmistakable evidence that its reign of terror and barbarity—a campaign that has placed the lives of so many Christians and Yazidis at risk—is driven by its connection with radical Islamist ideology and its desire to purify the “caliphate” of infidels.

Current reports indicate that ISIS, along with its predecessors and affiliates, have carried out more than 4,900 attacks since 2002, killing more than 33,000 people, injuring tens of thousands, and displacing millions more. Evidently ISIS carries out more than 100 attacks per month and its thirst for blood remains unabated. It is time to take ISIS’s genocidal campaign seriously and it is time to take them at their word.

The ACLJ has continued to advocate to protect persecuted Christians and other religious minorities being targeted by ISIS’ genocide.  We are preparing our next series of critical legal actions, including a letter to the United Nations Office of the Special Adviser on the Prevention of Genocide and letters to every U.S. presidential candidate, laying out the gruesome facts and the legal obligations to protect the victims.

We must continue acting and speaking out until the genocide is stopped. Join with us by signing the petition below.