FOIA to Department of State: Is the United States Responding to ISIS Genocide? | American Center for Law and Justice 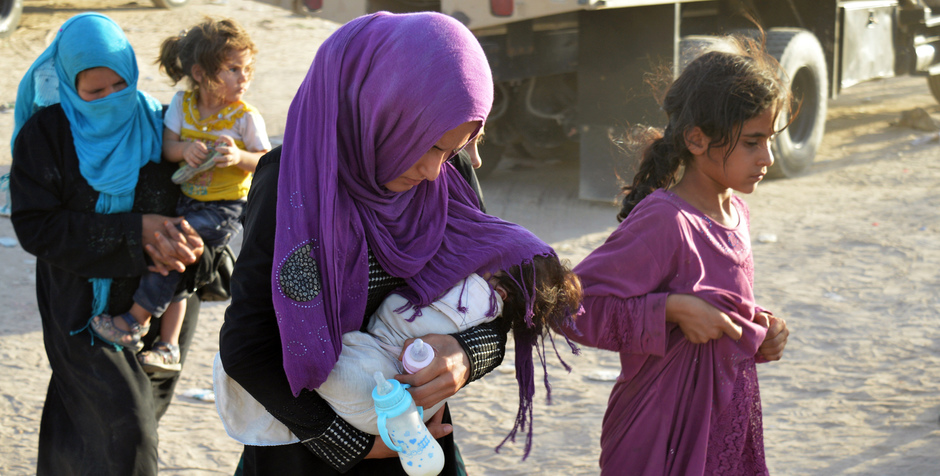 FOIA to Department of State: Is the United States Responding to ISIS Genocide?

Is the US Responding to ISIS Genocide?

“My purpose in appearing before you today is to assert that, in my judgment, [ISIS] is responsible for genocide.” – Secretary of State John Kerry

As beings created in the image of God, it is only right that we share His compassion for the oppressed and His desire for justice. In fact, as Christians we are called to “do justice” and to “satisfy the desire of the afflicted.” Around the world, there are thousands and thousands of afflicted people. One of the most poignant examples of affliction in the world today is the Islamic State (ISIS)’s genocide against Christians and other religious minorities in Iraq and Syria.

We’ve been hearing the nightmarish stories of those afflicted by ISIS for the last couple years - horrific stories of demonic torture and trauma to which we cannot relate. Rather than becoming overwhelmed by or calloused to the needs of those that are afflicted by genocide, it is important that we act! We must do justice!

Unfortunately, Secretary of State Kerry’s strong words above – echoing our responsibility to act – have not resulted in concrete action by the Obama Administration.  It has disappointingly led us to ask this critical question:

Is the Obama Administration doing anything about the genocide of Christians?

This week, the ACLJ sent a Freedom of Information Act (FOIA) request to the U.S. Department of State. Our FOIA request demands the answer to this key question.  It asks the Obama Administration to provide us with information that will show any action it has taken or is planning to take in response to the ongoing ISIS genocide of Christians.

The need for accountability became readily apparent in light of the Administration’s disappointing failure to meaningfully advance this cause at the recent U.N. Human Rights Council Session (where, in contrast, numerous other nations did speak up).

The ACLJ has been working continuously to speak up for those who are facing the horrors of genocide. We have sent key legal letters to U.N. Secretary-General Ban ki-Moon, U.S. Permanent Representative to the U.N. Ambassador Samantha Power, the 47 Member States of the U.N. Human Rights Council, and two letters to Secretary of State John Kerry. We’ve submitted key legal documents and made two oral interventions at the U.N. Human Rights Council. We also filed written observations regarding ISIS atrocities against Iraqi Christians in a case before the European Court of Human Rights. We’ve seen results as Congress, the European Parliament, and the Parliamentary Assembly of the Council of Europe have passed genocide resolutions, Secretary Kerry recognized the “genocide against . . . Christians,” a representative of the U.N. Secretary General’s office raised the issue at the U.N. Security Counsel, and numerous countries called for action to protect religious minorities for ISIS genocide at the U.N. Human Rights Council.

Every day, we continue to work to implement our Seven-Point Plan to 1) stop the genocide and 2) protect Christians.

While Secretary Kerry has responded to our call to declare that ISIS is indeed committing “genocide against . . . Christians.,” a mere declaration isn’t enough. The acknowledgment requires action; this genocide must be stopped.

And so, to find out just what the Obama Administration is doing to stop the ISIS genocide, or protect Christians, we asked for:

any and all records pertaining in any way to any and all efforts made by or within the U.S. Department of State (“DOS”) or any of its components, bureaus, offices, missions or delegations to:

(1) Honor the terms of the Genocide Convention in connection with the genocide being perpetrated by ISIS (also known as ISIL, Daesh, and the Islamic State) and its adherents and associated groups;

(2) Carry out Secretary Kerry’s public declarations that “[w]e must hold the perpetrators accountable,” “help those harmed by these atrocities be able to survive on their ancestral land,” and “stop” the “crimes”; and/or

(3) Otherwise counter, mitigate, oppose, or respond to the ISIS/ISIL/Daesh genocide against Christians, and provide relief to the victims. Such efforts include, but are not limited to, communications or briefings with individual, institutional and/or sovereign members of the international community, as well as within the DOS or between DOS officials and other governmental officials.

It is our hope that the DOS will answer our request with documents showing it is engaging this issue and working to end the genocide. While we are grateful to Secretary Kerry and the numerous others who have declared that genocide is occurring, more must be done. Now is not the time for comfort or complacency, but for active compassion. It is the time for justice.

If the State Department’s response reveals inadequate action, the American people must hold the government accountable. The ACLJ’s FOIA request provides a key legal avenue to hold the Administration accountable and serves as a critical opportunity to pressure the Administration to take action to protect dying Christians and other religious minorities. By law, the Obama Administration must respond.  Its response will determine our next steps.

This FOIA request is just another step that the ACLJ is taking in its efforts to seek an end to the genocide. In the coming days and weeks, we will continue to engage in the issue and to seek to satisfy the desires of the afflicted by seeking justice on their behalf. We will, as always, keep you updated on our progress.

You can join our efforts by signing our petition and by speaking out against inaction and the injustice faced by those afflicted by genocide.