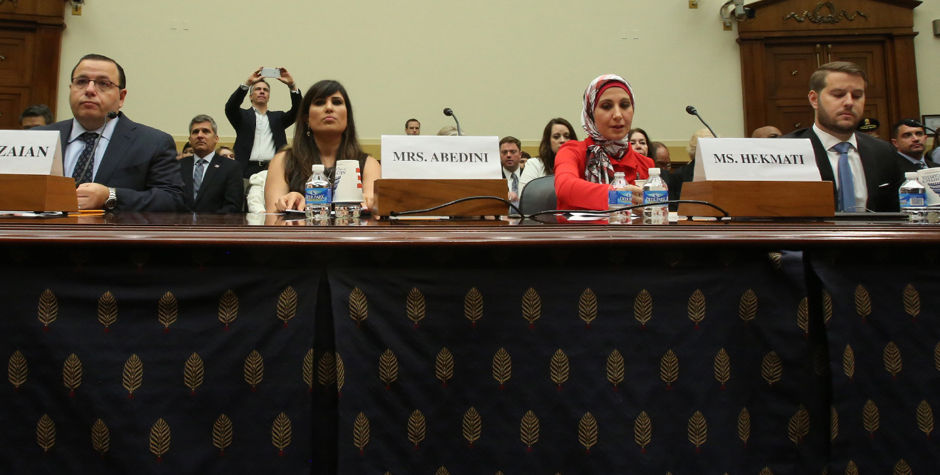 Congress Uniting with One Voice: Bring Pastor Saeed and the Other American Hostages Home

Congress Uniting with One Voice

The time is now.  Bring the American hostages home.

That was the message echoed over and over again today in Congress.

American Pastor Saeed Abedini’s wife, Naghmeh, delivered a compelling message to Congress, urging it to do all within its power to bring her husband home.

She testified alongside family members of the three other American hostages held in Iran: Jason Rezaian, Amir Hekmati, and Robert Levinson.

Their message was unified, regardless of any deal with Iran, bring the American’s home.

Pastor Saeed continues to suffer for his Christian faith.  He is serving an eight-year prison sentence because he met with fellow Christians in private homes in Iran more than 10 years ago – something perfectly legal at the time under Iranian law.  But now Iran considers this peacefully religious assembly a threat to the national security of the Islamic Republic of Iran.

Naghmeh testified that the nearly three years Pastor Saeed has already been imprisoned have taken their toll. “I have been carrying with me a deep excruciating pain knowing that my husband continues to suffer yet another day in one of the worst prisons in the world,” she said, continuing, “I’m not just worried about his physical pain, but his psychological [pain].”

Now is a critical time.  As the U.S. and Iran continue to sit at the bargaining table negotiating over a final nuclear agreement, time is of the essence.

As Naghmeh told the House Foreign Affairs Committee today, “These next few weeks is the very crucial time. If we don’t get the Americans out, I don’t know when we’ll have more leverage.”

The good news is, Congress is listening.  Member of Congress from both sides of the isle made it crystal clear that the freedom of these American hostages was a priority to them.  They spoke with one voice demanding Iran release Pastor Saeed and the other American hostages before they would even consider any potential deal.

This is a pivotal step given that both houses of Congress have secured the authority to review and approve any final deal with Iran.

A continual refrain throughout today’s hearing from each of the families of the American hostages was that the Obama Administration and the State Department have repeatedly told each of them that their loved one’s fate is being discussed on the “sidelines” of the nuclear talks.  Numerous Members of Congress, from both sides of the isle, expressed their outrage and committed to work together to pressure the Administration to do more – to do all within its power to obtain these innocent American’s freedom.

We couldn’t agree more.  The Americans must be a priority, not an afterthought.

I am very grateful for today's hearing. It was encouraging to hear from so many members of the Committee who expressed their concern and desire to help. It's also clear that there is wide bi-partisan support for securing the release of my husband and the other captive Americans. It is also very clear that time is of the essence.

As I told the Committee, there should be no further negotiations with Iran - certainly no deal - until Saeed and the other Americans are released and returned home. It's very heartening to hear so many members of Congress agree that the United States must use this leverage at the negotiating table now to secure the freedom of these Americans.

Now is the time.  At the ACLJ, we’ve already we’ve received over 929,000 petition signatures from people all across the world demanding that Iran simply release Pastor Saeed.

Naghmeh concluded her testimony by sharing the story of Shadrach, Meshach, and Abednego from the Old Testament.  She reminded us all that when they refused to reject their faith in God, He rescued them from the fire.  She said that Pastor Saeed is in that fire right now.  But then, in her written testimony, she also said these powerful words: “I know that God is with us in this journey, but I also know that God can use men and women to bring about freedom and justice. I hope today that someone here is motivated to be that man or woman.”

That someone is us.

Now is the time.  If you haven’t already done so, please add your to the petition for Pastor Saeed’s release today.  Please continue to pray, and be a voice for these wrongfully imprisoned Americans.  Demand their freedom.