Top U.S. Aid Recipient Is Set to Hang a Christian Woman for Blasphemy | American Center for Law and Justice 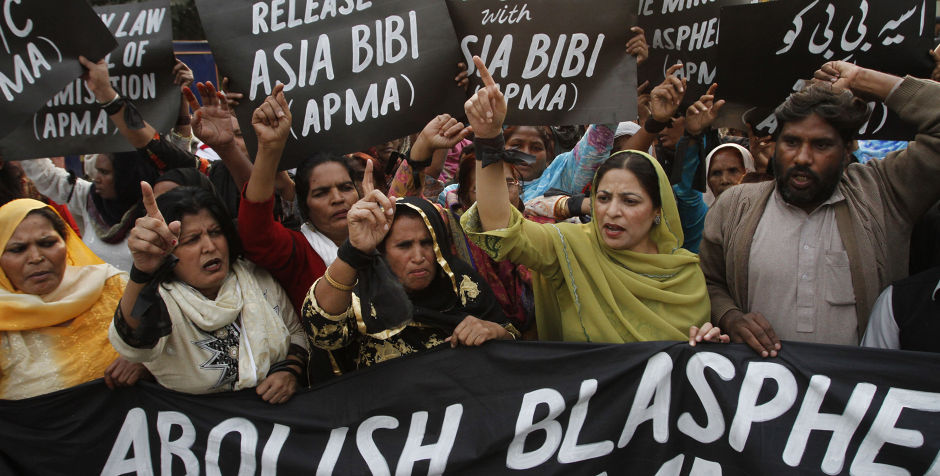 Top U.S. Aid Recipient Is Set to Hang a Christian Woman for Blasphemy

Christian Set to Hang for Blasphemy

Pakistan is a perennial recipient of billions of U.S. taxpayer dollars. It’s an occasional ally/frequent enemy, sometimes actively conspiring against U.S. interests, sometimes actually firing on U.S. troops (incidents so notorious they now have their own Wikipedia page), and — of course — it’s the home of increasingly virulent jihadist extremism. And, no, this extremism isn’t confined to the fringes of Pakistani society but is sometimes even manifested in its appellate courts.

Last week, a Pakistani court of appeals upheld Asia Bibi’s death sentence for blasphemy. She’s a Christian and a mother of five.

Not that it matters (one should be able to freely insult the prophet of Islam without fear of death), but there’s evidence that even the inherently illegitimate blasphemy charge is trumped-up nonsense. Here’s Asia Bibi describing the incident in her own words. The story begins with Bibi taking a drink of water, then offering the cup to her Muslim neighbors:

Then I start to hear muttering. I pay no attention and fill the cup again, this time holding it out to a woman next to me who looks like she’s in pain. She smiles and reaches out . . . At exactly the moment Musarat pokes her ferrety nose out from the bush, her eyes full of hate: “Don’t drink that water, it’s haram!”

Musarat addresses all the pickers, who have suddenly stopped work at the sound of the word “haram,” the Islamic term for anything forbidden by God.

“Listen, all of you, this Christian has dirtied the water in the well by drinking from our cup and dipping it back several times. Now the water is unclean and we can’t drink it! Because of her!”

It’s so unfair that for once I decide to defend myself and stand up to the old witch.

“I think Jesus would see if differently from Mohammed.”

Musarat is furious. “How dare you think for the Prophet, you filthy animal!”

The story then moves into the familiar demand for conversion:

“That’s right, you’re just a filthy Christian! You’ve contaminated our water and now you dare speak for the Prophet! Stupid bitch, your Jesus didn’t even have a proper father, he was a bastard, don’t you know that.”

Musarat comes over as though she’s going to hit me and yells: “You should convert to Islam to redeem yourself for your filthy religion.”

I feel a pain deep inside. We Christians have always stayed silent: We’ve been taught since we were babies never to say anything, to keep quiet because we’re a minority. But I’m stubborn too and now I want to react, I want to defend my faith. I take a deep breath and fill my lungs with courage.

“I’m not going to convert. I believe in my religion and in Jesus Christ, who died on the cross for the sins of mankind. What did your Prophet Mohammed ever do to save mankind? And why should it be me that converts instead of you?”

Five days later, I went to work fruit picking in another field. I’ve almost filled my bowl when I hear what sounds like a rioting crowd. I step back from my bush, wondering what’s going on, and in the distance I see dozens of men and women striding along towards our field, waving their arms in the air.

I catch the cruel eyes of Musarat. Her expression is self-righteous and full of scorn. I shiver as I suddenly realize that she hasn’t let it go. I can tell she’s out for revenge. The excited crowd are closer now; they are coming into the field and now they’re standing in front of me, threatening and shouting.

“Filthy bitch! We’re taking you back to the village! You insulted our Prophet! You’ll pay for that with your life!”

They all start yelling:

“Death! Death to the Christian!”

The angry crowd is pressing closer and closer around me. I’m half lying on the ground when two men grab me by the arms to drag me away. I call out in a desperate, feeble voice:

When a young mullah intervenes, he is explicit: Convert or die.

“If you don’t want to die,” says the young mullah, “you must convert to Islam. Are you willing to redeem yourself by becoming a good Muslim?”

“No, I don’t want to change my religion. But please believe me, I didn’t do what these women say, I didn’t insult your religion. Please have mercy on me.”

I put my hands together and plead with him. But he is unmoved.

“You’re lying! Everyone says you committed this blasphemy and that’s proof enough. Christians must comply with the law of Pakistan, which forbids any derogatory remarks about the holy Prophet. Since you won’t convert and the Prophet cannot defend himself, we shall avenge him.”

This is a nation with a nuclear arsenal, that flies dozens of F-16s supplied by the United States, and is an alleged partner in our war on terror. But it’s a nation that sentences mothers to death simply because they’re Christians who refuse to deny Christ — even in the face of an angry, violent mob.

Bibi is appealing to Pakistan’s highest court, a process that could take years. In the meantime, how many more billions of American dollars will subsidize this savagery? I fully recognize there are good and noble members of Pakistani society — our European Centre for Law and Justice has an affiliate in Pakistan that is staffed with courageous lawyers who’ve saved many Christian lives — but it’s past time for our government to insist that our alleged allies behave in a manner that not only advances U.S. interests but also protects the most basic of human rights of Pakistan’s persecuted Christian minority.

We simply cannot tolerate jihadist extremism. Yet we do, again and again — even subsidizing and arming it. And how are we rewarded for this appeasement and forbearance?

With more sharia; with more jihad.

And with more Christian mothers facing the hangman’s noose.