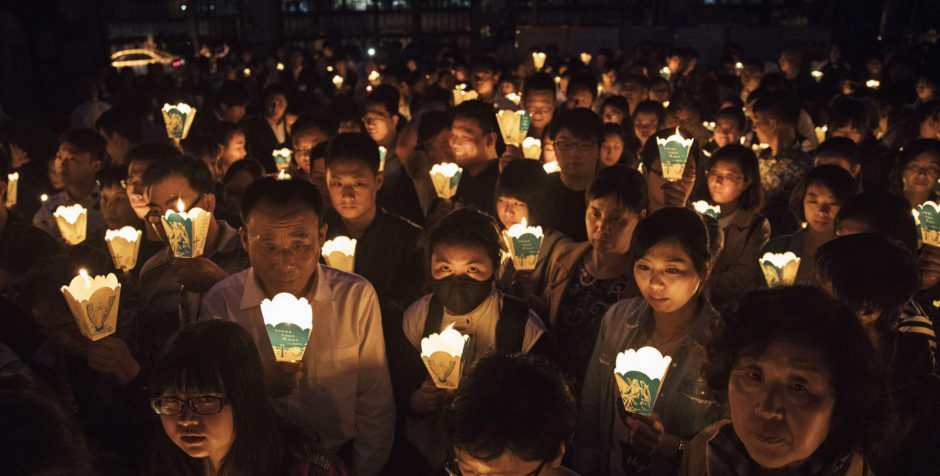 Late this past Sunday afternoon, Chinese police raided one of the largest urban churches in China— the “Early Rain Covenant Church” in Chengdu, Sichuan Province.

Starting around 5pm, the police raided the homes of individual congregants over a 12-hour period; breaking into their homes, threatening the families, and using powerful searchlights to intimidate the Christian believers. By 5am on Monday morning, more than 80 leaders of the church were arrested and taken from their homes. The senior pastor, Yi Wang, along with his wife and the elders and deacons were taken away. Many of the congregants are under some form of house arrest, and some were even forced to allow the police to stay in the church members’ homes for an extended period. In addition to the raids and arrests, the police forced the church members to sign a statement promising that they will not attend the church anymore. This latest attack is still ongoing.

Around 9am Monday morning, some believers who had been taken to the police station were then taken from the police station and presented to different local authorities and employers who offered them benefits if they agree not to attend the church, including business opportunities, work promotions, or better school choices for their children.

Yesterday, the international community celebrated Human Rights Day, as it is the 70th anniversary of the Universal Declaration of Human Rights (UDHR). Seventy years ago, China voted in favor of the UDHR. Article 18 of the UDHR states:

Everyone has the right to freedom of thought, conscience and religion; this right includes freedom to change his religion or belief, and freedom, either alone or in community with others and in public or private, to manifest his religion or belief in teaching, practice, worship and observance.

But, in conducting these raids and arrests, the Sichuan Provincial government is violating the text and spirit of the UDHR. Furthermore, in 1998, China signed the International Covenant on Civil and Political Rights (ICCPR), Article 18 of which is nearly identical to Article 18 of the UDHR, and states:

Everyone shall have the right to freedom of thought, conscience and religion. This right shall include freedom to have or to adopt a religion or belief of his choice, and freedom, either individually or in community with others and in public or private, to manifest his religion or belief in worship, observance, practice and teaching.

While China has not yet ratified the ICCPR, signing the treaty is considered an indication of an intention to comply with the text of the treaty. Clearly, that is not occurring.

Christians in China should indeed be free to practice their religion. These crackdowns need to end. We urge China to honor the UDHR, to ratify and enforce the ICCPR, and to stop its local authorities from persecuting religious minorities.